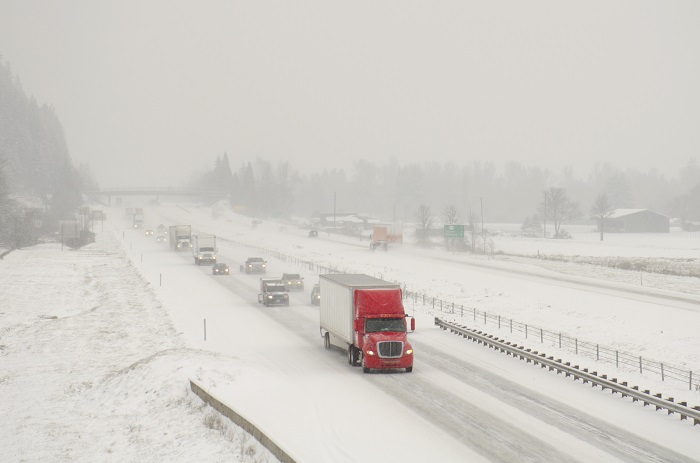 Extreme cold that already has hampered freight movement in the US Midwest is now freezing a broad swathe of the eastern United States. Photo credit: Shutterstock.

Days of bitterly cold weather across the northern United States, followed by the massive winter storm now hitting the Atlantic Coast, have raised concerns for shippers about inland transportation capacity, especially truck and drayage capacity, as well as shipping delays and spikes in pricing.

Extreme cold that already has hampered freight movement in the US Midwest is now freezing a broad swathe of the eastern United States. Winter Storm Grayson moving up the East Coast is expected to be followed by exceptionally high winds, with numbing wind chill factors.

Grayson deposited snow as far south as Tallahassee, Florida, and is expected to pound parts of New England with perhaps more than one foot of snow. With winds gusting 40 to 60 miles per hour, temperatures in northern New England are expected to drop below -30 degrees Fahrenheit.

Shippers who remember the polar vortex of 2014 know what to expect in the wake of a storm of this magnitude: less available transportation capacity and higher spot market truck rates, with many trucks and other assets in transportation networks out of place, as the recovery begins.

“The weather, in terms of extreme cold, is absolutely an issue for truck equipment and for train lengths,” Rick LaGore, CEO of logistics company InTek Freight and Logistics, said Wednesday. Even when roads are clear, it may not be possible to start trucks in sub-zero temperatures.

“We’re tight with power on the street because the trucks just can’t get started,” Vince Paperiello, executive vice president of pricing and yield management at Hub Group in Chicago, said Tuesday. “Maybe it’s only a week or two of direct impact, but it rolls into subsequent weeks.”

In the first quarter of 2014, a series of polar vortex storms that stretched from the Northwest to the Southeast knocked supply chains off balance. Chicago, New York, and Atlanta were hit by bruising storms at different times during the quarter, reducing truck and drayage capacity.

The result was a spike in transportation rates in a quarter that saw economic activity drop. Supply chains had barely recovered when a surge in pent-up demand and a stronger underlying economy sent trucking rates flying to post-recession heights unmatched until late 2017.

This month, a new polar vortex finds the US economy stronger and truck and intermodal rates at or near historic highs, even after the end-of-the-year holidays. Truckload capacity already is tight, and prolonged, extreme weather would only make a bad situation worse for shippers.

“In 2018, you can’t discount that there’s going to be weather impacts,” Paperiello said, especially after a year marked by disruptive hurricanes and wildfires. In 2014, he noted, “The polar vortex threw the rail network out of balance.” The recovery lasted into 2015.

“They start to look at shifting freight to truckload if they can’t get a shipment to a customer via LTL when wind chills drive temperatures down to -30 degrees [Farenheit],” Muessig said Wednesday. Carrier embargoes on freezable freight can pile up goods in warehouses.

Pitt Ohio’sexperience in the 2014 polar vortex led to a shift in strategy. The company, which had wrapped palletized freight in heated blankets, made a significant investment in heated trailers. The carrier now operates about 1,200 heated trailers in its Pitt Ohio Group fleets.

“The polar vortex was a galvanizing moment for us,” Muessig said. Pitt Ohio operates from the Great Plains through the Midwest to New York and Virginia, with 21 terminals in the Mid-Atlantic and Midwest. Storms in any of those regions can disrupt operations across the continent.

Furthermore, shippers have to worry about more than weather at origin and destination points. “You have to be aware of conditions wherever that freight is traveling,” Muessig said. “It may be warm today in New Jersey but -30 [Farenheit] in Chicago, where that freight will be.”

When conditions become dangerous, however, there is not much a carrier or shipper can do but shut down, or at best delay operations. On Thursday, Pitt Ohio delayed service at terminals in Richmond, Virginia; in Baltimore, Maryland; and in Cherry Hill and East Windsor, New Jersey.

“Additional terminals may be affected as well as the snow continues to fall into this afternoon: Norristown, Allentown, and Hazelton,” the company said in a service advisory, referring to facilities in eastern Pennsylvania. Other LTL carriers and freight operators are following suit.

Grayson is unusual for a winter storm in the size of its footprint, as well as its severity. Port operations from Boston to Savannah have been stung by the storm’s fury as it moves north. Georgia ports in Savannah and Brunswick were closed Wednesday but reopened Thursday.

In South Carolina, Charleston also closed its port Wednesday and reopened Thursday at 1 p.m., with container gate hours extended until 10 p.m. North Carolina closed its port facilities in Wilmington and Morehead City Thursday and will operate them on a two-hour delay Friday.

Virginia closed its ports in the Hampton Roads area Thursday, expecting heavy snow. The Port of Baltimore, Maryland, and the Port of Philadelphia remained open. Meanwhile, the Port of New York and New Jersey, which expects up to nine inches of snow, shut down operations Thursday.

Port Newark Container Terminals said Thursday would be counted as “free time” for shipping containers stored there and Maher Terminals said it would be “extending free time today for all imports still within free time. Any imports already on demurrage continue to accrue.”

The port’s marine terminals plan to open Friday, although most will open two hours later than usual, at 8 a.m. EST as opposed to 6 a.m. EST. In New England, Boston’s Conley terminal closed Thursday as Grayson aimed for Massachusetts.

In a service advisory, Norfolk Southern said its intermodal terminal in Ayer, Massachusetts, would close at 1 p.m. EST Thursday and its facilities in Charleston and in the Hampton Roads area in Virginia remained closed. All other NS Railway facilities are operating normally.

Shippers far from the East Coast will still be chilled by Grayson. Just as in 2014 polar vortex, and in the wake of hurricanes Harvey and Irma, delayed shipments will affect sales and production, possibly for months. Businesses with contingency plans will feel less frostbite.

As a cold winter unfolds, shippers are likely to look for ways to limit their exposure to the trucking spot market, where rates in the last week of 2017 remained at all-time highs, according to DAT Solutions. Tight capacity could keep those rates elevated in the first quarter.

That will mean greater collaboration with contract carriers to ensure shippers have access to trucks and carriers utilize their assets more efficiently to move freight when needed. No one can control the weather, after all, but shipping practices and schedules are another matter.