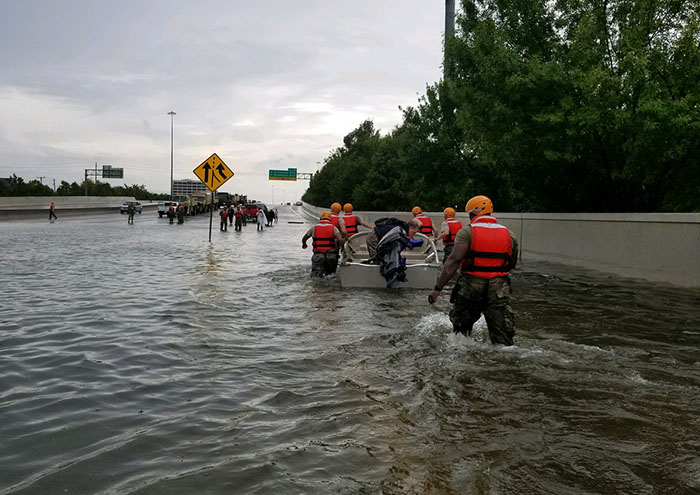 It will be some time before Houston-area highways and roads are more suited for automobiles than boats.

Freight transportation in and around Houston remains at a standstill as companies check on staff, assess damages, and prepare for a difficult recovery and higher truck rates after historic flooding unleashed by Hurricane Harvey.

Port Houston is taking a day-by-day approach to reopening its terminals, which closed at mid-day Friday before Harvey hit land near Corpus Christi. The US Coast Guard has halted ship traffic at Houston, Galveston, Freeport, and Corpus Christi until port channels and navigation aids can be checked.

As rescues continue in flooded neighborhoods across the Houston metropolitan area, the logistics industry is looking ahead to a likely spike in trucking rates after high water recedes from streets and neighborhoods.

“Look for spot prices to jump over the next several weeks, with very strong effects in Texas and the South Central region,” said Noel Perry, partner at freight analyst firm FTR. “Spot pricing was already up strong, in double-digit territory. Market participants could easily add 5 percentage points to those numbers.”

FTR said Hurricane Katrina, which devastated New Orleans and the Mississippi coast in 2005, caused annualized trucking rates to rise at an average rate of 7 percent. The mid-winter storms of 2014 produced a 22 percent year-over-year jump in spot rates, the analyst said.

Richmond, Virginia-based Seaport Global Securities had a similar view. It noted that Katrina struck when trucking rates were trending downward, but that Harvey arrived when the market was tightening. The result could be higher rates through the holiday season and into the first-quarter 2018 bidding season, Seaport said in a research note.

Analysts said that when transportation resumes in the Houston area, freight demand will be huge — first for items such as bottled water and food, and then for building materials, home furnishings, and other supplies.

When that will happen is still unclear. Major highways in the Houston area remained impassable at key points Monday after as much as 30 inches of rain that the National Weather Service said could reach a total of 50 inches in some places by Friday.

Large refining and petrochemical plants along the Houston Ship Channel remained closed. The Gulf Coast region between Corpus Christi, Texas, and Lake Charles, Louisiana, has the largest concentration of US oil refining capacity.

Details on conditions at trucking depots and warehouses have been slow to emerge, but some large operations appeared to escape damage. Third-party logistics provider Dunavant said its Houston facilities had no wind or water damage.

Recovery could be slowed by the sheer scope and extent of the storm,. Many employees at logistics companies, terminals, and other supply chain work lost homes and vehicles in the flooding.

“That’s the untold story in these events. Most commercial properties are prepared, but they need workers to run their facilities — and at least initially, they may not be available,” said Jason Hilsenbeck, president of Drayage.com and LoadMatch.

Hilsenbeck said he expects Houston-area drayage rates to spike when highways, port terminals, and railroads resume operations. “I think the peak will come about three days after the port opens up, when free time starts to expire and everybody wants their cargo out,” he said.

Port Houston posted 16 percent year-over-year increases in full TEU during the first half of this year. In 2016 Houston handled more than 1.8 million TEU of full containers, and accounted for more than two-thirds of US Gulf container volume.

Container lines serving the port have avoided diverting cargo to other ports. Maersk said it hoped to work two ships, the Maersk Ohio on its TA1 service and the Maersk Denver on its MECU service, at Houston on Wednesday if labor was available.

The Port of Corpus Christi, which did not flood but was close to Harvey’s eye when the storm hit land with 130 mph winds, said its terminals had light to moderate damage. The port said it was working to restore power to all facilities and hopes to return to normal operations Sept. 4.

The Coast Guard said set conditions limiting vessel operations at the ports of Beaumont, Port Arthur, Orange, and Lake Charles, which are east of Houston and are in the path of the storm’s latest path.

BNSF and Kansas City Southern railways and Union Pacific Railroad suspended operations in the Houston area and embargoed traffic at the hurricane approached, and said customers should expect delays.

Trucking companies also suspended operations in the region, with the pain inflicted by the storm reaching far inland. Terminal operations as far away as Laredo, Dallas, and Fort Worth were affected by the diversion of freight or the inability to move freight on to its final destination closer to the Gulf.

“All shipments currently in our network destined to the impacted are being held at destination break terminals or the Fort Worth, Texas terminal,” Central Freight Lines said in a statement.

The Waco, Texas-based less-than-truckload carrier’s terminals in Houston and Victoria, Texas, will be closed the remainder of the week, the carrier said. “The Houston flooding situation will get worse before it gets better,” Central said in a notice to shippers. “It is impractical to talk about recovery plans for the Houston area at this time.”

The carrier’s Victoria terminal was damaged and will need to be cleaned up before terminal operations can resume, Central said. Its Corpus Christi terminal was closed Monday, but “there is a good chance it will reopen this week. San Antonio and Austin are operating normally at this time.” Central is diverting truck capacity to help with state relief efforts.