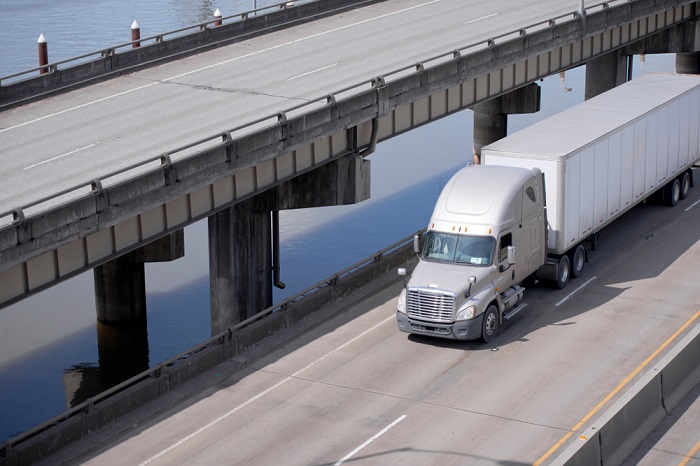 Spot US truckload rates that surged last year have flattened out in early 2019, after rising mildly and spottily during and just after the holidays. Photo credit: Shutterstock.com.

Shippers' prospects in US truckload contract talks look better this month than they did even a few months ago, thanks to flat spot market prices and a changed economic landscape. Truckload carriers are losing some of the bargaining leverage they hoped to retain in 2019. However, economic uncertainty may limit shipper advantages in upcoming contract talks.

Spot truckload rates that surged last year have flattened out in early 2019, after rising mildly and spottily during and just after the holidays. Like a coating of snow, spot truckload prices have settled at a level that’s lower than last year’s high point but still higher than two years ago. DAT Solutions national average rates are roughly equal to prices reported in December 2017.

At the moment, there’s not much sign that they’ll be driven higher anytime soon, and that will give shippers some, although perhaps not much, additional bargaining leverage in contract talks with motor carriers. But economic uncertainty will keep shippers in check, said Charles W. “Chuck” Clowdis Jr., founder and managing director of Trans-Logistics Group.

Trans-Logistics Group’s monthly analysis of contract and spot market truckload rates in 14,700 unique origin-and-destination-point lanes presents a very different picture this January than it did a year ago, when stronger freight demand and the electronic logging device mandate collided, chopping into truck capacity and firing spot rates into the exosphere in early 2018.

“All of a sudden there will be a spot rate so low that it’s the lowest we’ve seen in 18 months, and then we’ll get one higher than we’ve ever seen before, but across the board, rates are flat,” Clowdis said. “There are still some increases that defy imagination, but you don’t see a lot of dramatic increases. When contracts come up for renewal, it will be a telling time.”

Anecdotally, he said, “shippers tell me carriers aren’t asking for increases. We see more and more they’re going back to their old contract rates. The rapid escalation has slowed.”

Clowdis’s anecdotes match up with data load board operators DAT Solutions and Truckstop.com are reporting. Available trucks in the spot market jumped 77 percent in the week ending Jan. 12, while loads increased only 9 percent. As a result, shippers knocked down national average spot rates for dry van, refrigerated, and flatbed freight by 4 to 6 cents per mile.

The US average dry van rate fell from $2.11 to $2.05 cents per mile, DAT said Tuesday. Rates moved downward in 84 of the top 100 dry van lanes by volume, the company said. Outbound dry van rates from major port cities Philadelphia, Stockton, California, Los Angeles, and Seattle all declined, falling between 5.6 and 6.5 percent in the second week of 2019.

The US dry van average reported by Truckstop.com dropped 12 cents to $2 per mile in the second week of the year, an 18 percent year-over-year decline, and a 25.7 percent drop from Truckstop.com’s high point of $2.69 per mile in the week of June 25 last year. The load board operator’s average van rate jumped from $2.07 to $2.14 per mile in the last week of 2018.

Week-to-week market volatility, however, conceals the fact that the average rates reported by both companies have flattened long term. The five-week rolling average for the DAT US dry van spot rate has bumped between $2.08 and $2.10 per mile since Nov. 10, a 10-week spot market “flat line,” after a gradual declining from $2.36 per mile in the week ending July 28.

Truckstop.com’s data tell a more volatile story. The five-week rolling average of its weekly US dry van rate fluctuated between $2.02 per mile and $2.13 per mile over the period between Nov. 11 and Jan. 13, reaching a peak in the middle of that period before dropping to $2.07 per mile Jan. 13. Truckstop.com’s data suggest a small pricing hump rather than a flat line.

Where do spot rates go next? DAT’s average van spot rate, including fuel surcharges, has been above $2 per mile since the first week of October 2017. Truckstop.com broke that $2 per mile barrier in September 2017, although it’s now scraping it once more. The average US retail price of diesel fuel has fallen for 13 consecutive weeks, dragging down surcharges and rates.

It’s unclear whether the spot market has found a new floor or is still heading toward the cellar. Trucking rates face tough year-over-year comparisons and an uncertain economic outlook, as the US deals with the fallout from trade wars, a volatile stock market, and the government shutdown.

That uncertainty has led shippers to hold back demands for deeper rate cuts, Clowdis said.

A further delay in higher tariffs on Chinese goods or a reduction in tariffs in a US-China trade agreement could have a positive impact on freight demand later in the year, he said, as could a speedy resolution of the government shutdown. Unemployment remains low, and lower energy prices could free up some consumer spending. But that’s all speculative at this point.

A year ago, US real GDP expanded 2.2 percent, followed by 4.2 percent second-quarter GDP growth and 3.4 percent growth in the third quarter. The economy has been cooling since, and 2.2 percent first-quarter growth this year seems unlikely. A report from Wall Street analysts at Cowen Research throws even colder water on trucking’s outlook.

“We believe demand in February may weaken and begin to show the full effect of the 2018 tariff pull forward, at an inopportune time for trucking companies,” the equity research firm said Jan. 14. Cowen notes that shippers and trucking companies, as well as third-party logistics companies, are preparing for a major round of contract negotiations that runs through May.

“Rates for the year are not likely to go negative, though they are likely to be lower than we had previously forecast,” Cowen said in its report. Too many motor carriers are making optimistic assumptions about rates and the need for new equipment based on “the good feelings [for carriers] of the last 18 months.” The market “fails to realize the magnitude of the move.”

When the trucking market flipped in 2017, it flipped fast. Carriers and shippers will carefully track freight demand as the second quarter, now trucking’s busiest season, approaches. The strength or weakness of that quarter could signal whether the next flip is imminent.