Roadcheck focus on ELDs to trim US truck capacity further

Roadcheck focus on ELDs to trim US truck capacity further 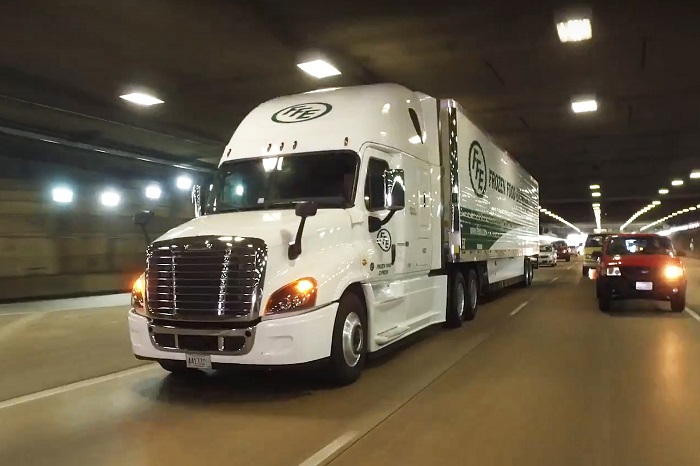 The annual Roadcheck truck safety inspection blitz that starts June 5 could be the first real test of electronic logging compliance. Thousands of trucks will be stopped and checked by state and federal inspectors, and they will focus on hours-of-service violations. That could push up already high spot market prices in the short term. (Above: An FFE truck travels on a US road.) Photo credit: FFE Transportation.


US shippers should brace for over-the-road disruption the week of June 5, as law enforcement and regulatory officials across North America crack down on truck driver hours-of-service (HOS) compliance. The Commercial Vehicle Safety Alliance’s (CVSA) annual Roadcheck this year spotlights compliance with HOS rules and the electronic logging device (ELD) mandate.

During the three-day safety blitz, inspectors in the United States, Canada, and Mexico will perform detailed safety inspections on thousands of trucks and truck drivers, placing those who don’t comply with regulations or meet safety standards out of service (OOS). Since 1988, more than 1.5 million roadside inspections have been conducted during the International Roadcheck.

In the past, CVSA, which represents state and provincial truck safety officials throughout North America, has used Roadcheck to gauge compliance with equipment safety regulations, targeting brakes and tires. The focus on HOS rules — which govern how many hours truckers can drive, work, and need to rest each day and week — follows the rollout of the ELD mandate.

“The top reason drivers were placed [OOS] during 2017 International Roadcheck was for [HOS] violations,” CVSA president Captain Christopher Turner of the Kansas Highway Patrol said in a statement. Last year, 32 percent of truckers placed OOS had violated HOS rules. “It’s definitely an area we need to call attention to this year,” Turner said.

The ELD rule that took effect Dec. 18 didn’t change underlying HOS rules or exceptions, but it did place a spotlight on HOS compliance, he said. Full OOS enforcement of the ELD mandate began April 1. “We thought this year would be a perfect opportunity to focus on the importance of the [HOS] regulations,” said Turner.

That was before the ELD mandate required truckers to scrap paper logs they’ve used to record work and rest hours since the 1930s and replace them with electronic devices. Next month’s Roadcheck will be the first major test of how widespread compliance with the ELD mandate actually is and how well truck drivers have learned to use the devices since December.

Shippers have been affected by the inspection campaign in previous years. “Each year, a lot of truckers decide to schedule their vacations around the Roadcheck program so that they can avoid the hassle of being stopped and having their vehicles inspected,” Mike Regan, chief relationship officer at TranzAct Technologies, said in an email warning to shippers.

That means truck capacity tightens during the week of Roadcheck and spot truckload rates shoot up. “If you are in the spot market at all, finding a truck at a reasonable cost may be difficult,” Regan said. “It may be worthwhile to look at your shipment plan for next week and determine which orders/loads must move versus loads that can be deferred until the next week.”

In 2015, for example, DAT Solutions saw shipments posted on its load boards jump 37 percent during Roadcheck, while the number of available spot market trucks dropped 9 percent. That pushed up spot market pricing in the short term, until drivers returned the following week. At that time, truckload capacity was relatively loose, compared with this year’s vise-like market.

Predicted OOS wave at ELD’s start did not occur

The wave of OOS orders many feared would hit once full enforcement of the ELD mandate began April 1 never materialized. Inspectors may find that the majority of drivers they stop do have either an ELD or a grandfathered automatic onboard recording device (AOBRD) in the truck cab. The more important question may be if the driver knows how to use that ELD.

“There are a lot of people using new technology, a lot of drivers who hadn’t been using telematics,” said Daren Lauda, vice president and general manager of North America for ELD vendor Teletrac Navman. “Some violations our customers have run into have been derivatives of the driver not knowing what to tell the person conducting the inspection.”

Data reported online by the Federal Motor Carriers Safety Administration (FMCSA) reveal a marked increase in the number of truck driver violations associated with ELDs this year, but the largest number reported involved “operating with a device not registered with the FMCSA.” Violations for not being able to transfer ELD data electronically also leaped.

“We’re definitely seeing those violations,” Lauda said. “I had a customer call me to tell me a driver had been cited for not having an ELD, when he had an AOBRD. “The driver didn’t know how to articulate what they had.” Teletrac Navman has produced tip sheets providing drivers with concise instructions on how to prove HOS compliance with ELDs in an inspection.

Lauda said the company has seen progress since the mandate took effect more than six months ago. “We put up videos that tell drivers how to use the ELD, and we saw views of those videos spike and then later tail off,” just as ELD sales slowed from a frenetic pace in December and January. “We’re also seeing phone calls taper off as people get used to using the system.”

Hopefully, that progress will translate into fewer violations when CVSA inspectors hit the road June 5. “We’re at the intersection of human behavior and technology,” Lauda said. “It’s critical to make sure the driver knows what he or she needs to do to transmit that information” from the ELD to the inspector. Education is key to keeping drivers in service and freight moving.