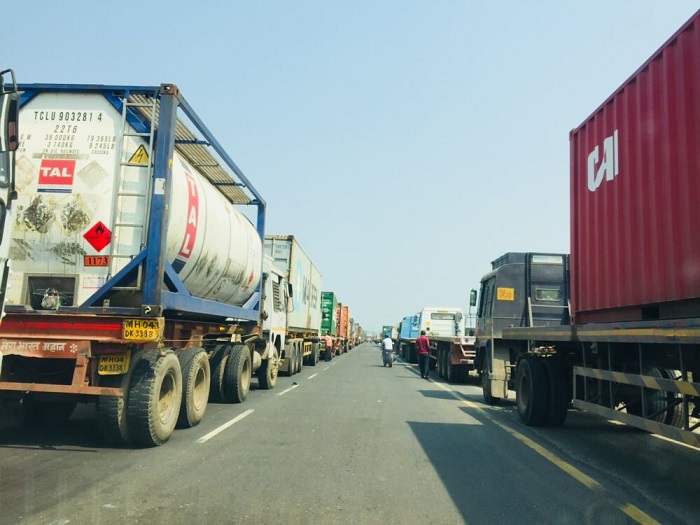 “Due to extreme congestion on terminal roads, the turnaround of vehicles is very slow and also the situation is very critical for any urgent movement of containers,” warehousing services provider JWC Logistics Park stated in a notice to customers. “The CFS [container freight station] is not responsible in case of delays/shut out of containers.”

Truckers, under the aegis of the Nhava Sheva Container Operators’ Welfare Association, have also expressed concern regarding the impact on their businesses, due to lengthy turn times. They called on authorities to intervene.

Three factors appear to have combined to cause the congestion — ongoing port approach road repairs, the typical fiscal year-end shipper rush to complete export orders with a fortnight to go, and a larger shift of trucks toward DP World’s Nhava Sheva (India) Gateway Terminal (NSIGT), fueled by extra ship calls there.

NSIGT last week added a regular call from the Indamex Service between India and North America, after the nine-vessel consortium ended its previous long-time berthing window deal with the port-owned terminal, and further, it has also had ad-hoc calls from the Europe-Pakistan-India Consortium 2.

The Indamex terminal change took effect with a Sunday arrival of the 6,400 TEU Priority at the public harbor. The vessel had 1,028 export moves and 891 import moves on its first call at NSIGT, company sources told JOC.com.

DP World — at the center of truckers' concerns

DP World Nhava Sheva, which has been at the center of the truckers’ concern regarding congestion, blamed the gate slowdown on the construction of a road flyover outside the port, which the company claims has cramped traffic flows considerably.

“To ease this congestion, we have worked in unison with the port trust on an alternate route to ensure normal traffic flow. The traffic movement at our gates and inside the yard is running smoothly,” the company told JOC.com.

DP World, which has two facilities in JNPT, also said it is constantly looking for ways in which it can better serve the trade and facilitate ease-of-doing-business in the supply chain ecosystem.

Sensing the need to shore up productivity in a difficult market, APM Terminals-operated Gateway Terminals India last week set up a vehicle booking service, in coordination with local third-party logistics providers, to streamline gate in of trucks for import pick ups.

Although gate delays are not so uncommon in JNPT, especially during the peak period, given that as much as 85 percent of the port’s traffic moves by road, the current scenario yet again highlights the importance of greater road-to-rail freight conversions to tackle recurring landside congestion.

However, despite a host of proactive measures, including an equalized pricing program for train and truck handling, the rail output has thus far been no better. A JOC.com data analysis showed the port’s rail share in February fell to 13.2 percent from 13.6 percent in the previous month, with April-to-February average pegged at 14.6 percent, a long way off the 25 percent target goal announced by the government.

Amid those chronic supply chain challenges and growing competition from nearby minor port rivals, JNPT is poised to reach a new volume high in the current fiscal year, which ends on March 31. New traffic data obtained by JOC.com show the port, as a whole, has handled 4.56 million TEU from April 2017 through Tuesday morning, breaking its record of 4.5 million TEU handled in 2017.

“JNPT is focused on providing global standards of service to its customers and improving trade between India and the rest of the world, which will contribute to the growth of the economy,” port officials said in a recent statement.

JNPT represents nearly 40 percent of India’s overall container trade and more than 50 percent of such freight moving via major, public ports, so smoother supply chains there are critical for the emerging economy, analysts agree.