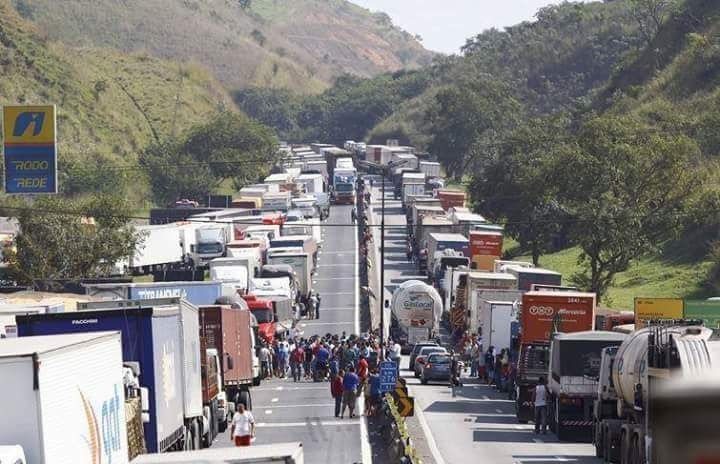 Energy prices have risen, lowering the margins of a key supply chain performer, and that has implications for the container shipping industry. (Above: The scene in May 2018, when Brazil's truckers went on strike, all but freezing road commerical transport in the country.) Photo credit: Rob Ward.

With fuel prices rising and freight demand soaring, shippers, from Brazil to China, are reminded of just how dependent they are on truck drivers and how much rockier it can get in terms of securing cross-border moves, much less getting an in-country haul. The reasons for delayed or stalled truck delivery vary, but they all point to increased pressure on what is often the weakest link for containerized supply chains, particularly those threaded through developing countries.

While there isn’t any index tracking global truck tensions, a spate of unconnected flare-ups suggests something is awry. And shippers would be wise to brace for more with crude oil per barrel in the $80 range. IHS Markit forecasts oil will average $78 per barrel in the second half of this year and then decline to an average of $74 per barrel in 2019.

The jump in Brazilian diesel prices sparked the 10-day national truck strike in late May that crippled roads, highways, and ports, costing shippers $5 billion to $15 billion, according to various estimates. Within two weeks, the average liter of diesel was 6.4 percent costlier, at 3.83 reais ($1). The previous administration’s subsidizing of new, environmentally friendlier rigs encouraged more drivers to enter the market, reducing driver operating margins and setting the stage for a backlash when higher diesel prices make their earning potential even slimmer. The average price per liter fell to 3.48 reais in the first full week of June after the administration of President Michel Temer reached a deal with the Association of Brazilian Autonomous Truck Drivers (Abcam) to end the strike in exchange for a 60-day diesel price reduction and a reduction in road tolls, as reported by JOC.com Brazil correspondent Rob Ward.

Most troubling for shippers and carriers is that the Temer administration agreed to a minimum freight rate for truckers on all government-associated contracts, a move critics say is not only unsustainable but also violates transport contracts.

“It is insane,” a São Paulo-based auto parts shipper told JOC.com. “To be held to ransom like this by one truckers’ union is not how a market economy is supposed to work.”

Truckers in Argentina flexed their muscle in a one-day strike on June 14, in a bid to increase pay 27 percent and boost fuel subsidies. Like Temer, Argentina President Mauricio Macri has been pushing tough reforms, although the unexpected jump in inflation has provoked popular blowback.

While there’s been limited reporting, largely due to state censoring, the spate of Chinese truck protests in inland provinces might be the most significant, in that they warn of domestic delivery restraints unless transport demand for e-commerce steps up. A number of local, less-than-truckload drivers in Anhui and Jiangxi provinces called for a boycott of a trucking platform provider over mismanagement of their capacity, the China head of a global logistics provider told JOC.com.

“We can’t make a living anymore now that haulage rates are under fierce competition and the diesel price is 7 yuan [$1.09] a liter ... We are also often randomly fined for traffic violations,” one driver based in Yantai, Shandong province, told South China Morning Post (SCMP).

The protests also point to Chinese workers’ increased willingness to push back on employers, despite tough crackdowns on such actions and censors scrubbing mentions of protests, making it hard to coordinate with fellow protestors and draw greater attention to their cause. After a local hauler suspended service to Shantou port between Hong Kong and Xiamen in protest of various issues, including terminal inefficiency, the operator China Merchants pledged to improve fluidity. While encouraging stakeholders to come together, China Merchants also sent a stark warning to those who would strike or intimidate drivers that “the public security organs will resolutely crack down on and strictly deal with them under the current situation of ‘eliminating the dark and eliminating evil’ throughout the country,” which is believed to be a reference to China’s anti-corruption campaign.

“In the next few months, I would expect to see more strikes like this, especially if fuel prices continue to rise and there is no meaningful or concrete response from the government.”