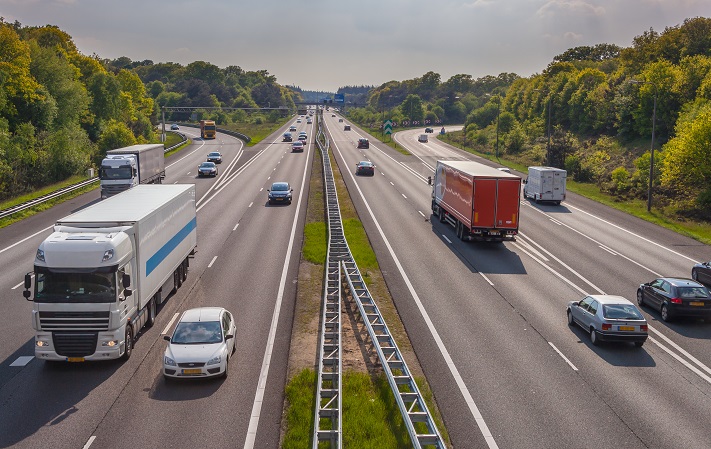 Above-trend GDP growth is boosting the continent's commerce, and that’s triggered a steady uptrend in trucking rates, amid tighter capacity — a trend shippers should expect through 2018. Rail is benefiting from some spillover transportation work, but the conversion is not nearly large enough to reduce rates. (Above: Trucks travel on a highway in the Netherlands.) Photo credit: Shutterstock.com.

European shippers are paying more for trucking, due to a scarcity of drivers and higher fuel prices, and signs point to even tighter capacity despite attempts by rail operators, the European Union, and its members to attract containers requiring long hauls from road to rail.

Although European trucking rates fell 14.7 percent from the 10-year peak in the fourth quarter, rates were 7.1 percent higher in the first quarter compared with the same period a year ago, according to the latest Transport Market Monitor by Capgemini Consulting and Transporeon, a logistics software company.

The trucking sector receives scant government attention compared with containerized rail, which is advocated for by EU and member countries looking to reduce emissions caused by transport. Even so, higher demand and rates, due to tightened capacity, is driving transport providers’ earnings in the fragmented world of trucking, in which 85 percent of operators have fewer than 10 trucks.

The land transport division, which focuses on industrial goods and food, was the leading contributor, with revenue up 3.1 percent to €4.44 billion with traffic rising sharply in France, Spain, and the Maghreb markets. “Germany remains the backbone of our operation, but France is well on its way to becoming a second pace setter for cross-border overland transport business. We’ve been systematically setting up this strategic logistics axis over the past few years,” said Bernhard Simon, CEO of the family-owned company.

But, he admitted, capacity bottlenecks and the growing shortage of drivers are the major factors that could potentially limit future growth. Driver training has become a top priority with 22 trainees completing their course last year and another 106 starting training at 35 sites across Germany. “We want to increase the number of trainee drivers every year and establish our quality concept also in other European countries,” Simon said.

Truckers are facing further cost increases while competition heats across the industry as East European firms capitalize on their lower operating costs to boost their presence in western markets even as they also face driver shortages and rising wages.

The German government is boosting both toll rates on heavy goods vehicles and extending the toll highways from next January, which is expected to cost the industry around €2.5 billion a year.

The European Commission, the European Union’s executive body, also plans to equalize truck and rail freight access charges. At present, trucks pay tolls of 20 to 25 percent of the European highway network, while rail operators are charged on a distance basis on all rail tracks across the 28-nation bloc.

But for now truckers are gaining business from rail in several markets, particularly in France where a prolonged strike at SNCF, the state-owned railway company, which began in April, has forced shippers to seek alternative transport. Truckers also benefited from the extended industrial dispute at APM Terminals in Gothenburg that led to carriers, including Maersk Line and Atlantic Container Line, to drop direct calls, forcing shippers to truck their cargoes to major deepsea ports, including Bremerhaven, Hamburg, and Rotterdam, for onward shipment.

The trucking industry got another unexpected boost from Italy’s new populist government, led by the Five Star Movement. Its leader, Deputy Prime Minister Luigi Di Maio, has expressed doubts over a planned 57-kilometer (35.4-mile) rail tunnel on a new high-speed Turin-Lyon track that aims to halve the 2.6 million trucks crossing the Alps between the two countries every year.

Di Maio, whose responsibilities include economic development, has said the tunnel, estimated to cost about €10 billion, with Italy set to contribute 30 percent, made sense 30 years ago but not now.

Truckers might lose traffic to rail on long-haul routes but they will hang on to shorter voyages, particularly at major container hubs. About 85 percent of all goods carried by trucks are transported over distances of less than 150 kilometers, according to the European Automobile Manufacturers’ Association (ACEA). Further, 40 percent of trucked goods leaving the port of Rotterdam, Europe’s top ocean container hub, remain in the local region, and only 10 percent of the trucks cross the border into the European hinterland.

For longer distances, inland shipping and rail are more attractive, according to the Rotterdam Port Authority. “Nevertheless, road transport remains indispensable in intermodal logistics planning. The first or last part of a delivery often requires some road transport, for example to go from the inland terminal to the final destination.”

“Transport by trucks is also highly flexible and often serves as a backup modality if something goes wrong with transport by rail or via inland shipping,” the port authority added. Trucks came to the rescue last year when Rotterdam’s key rail container link to southern Germany, Switzerland, and northern Italy was hit by a seven-week shutdown of the Rhine Valley Alpine track, due to a landslide at the Rastatt Tunnel in southern Germany. Trucks have also gained some business from the more than year-long barge congestion at Europe’s leading container port, which shows no signs of easing anytime soon.

Every deal that transfers containers from road to rail grabs big headlines, whatever the volume involved. Most recently, the newly launched Japanese three-carrier alliance Ocean Network Express inked an agreement with Freightliner, a unit of US-based Genesee & Wyoming, to shift UK traffic from trucks to trains, which it is claimed will remove 118,320 miles per day from the country’s roads and save around 180 tons of carbon dioxide (CO2) emissions. This is 13 percent more than when the three container carriers — “K” Line, MOL, and NYK Line — operated independently.

Meanwhile, some of Europe’s leading land transport logistics firms are responding to growing opposition to trucking, from leading shippers as well as governments, due to its impact on the environment. Trucks account for around a quarter of all transport emissions on the continent, but only make up 5 percent of all vehicles on its roads.

DSV, one of the most successful and profitable trucking companies and a major ocean and air cargo freight forwarder, set up a shortsea shipping unit in December, targeting existing and future customers that are seeking a more environmentally friendly and sustainable transport solution. “Our new shortsea service offers customers a viable alternative to road transport, reducing their carbon footprint, while transporting their raw material and stock in a timely and cost-effective manner,” said Lars Jokumsen, the Danish firm’s national shortsea product manager.

The European Commission recently unveiled plans to cut new trucks’ CO2 emissions by at least 30 percent by 2030 from the level in 2019 and set an interim target of 15 percent by 2025 to meet the European Union’s commitments under the 2015 Paris climate accord.

The commission claimed it would financially benefit the smaller firms that dominate Europe’s trucking market. “Most transport companies are small- and medium-sized enterprises. With our proposals, we want to make it easier for them to save money on fuel by investing in the most efficient trucks.”

The proposal has to be approved by EU member governments and the European Parliament before it can become law.

The industry is also sweating over the impact of the European Union’s transport mobility package, which includes a “Posting of Workers” directive that calls for truck drivers from lower-wage eastern Europe member states to receive the same payment and working conditions when they drive abroad as those employed by western transport firms, to create a genuine single transport market.

Eastern European truckers say the directive would undermine their competitive advantage, which has significantly increased their share of the EU market. Poland is the leading cross-border trucking nation, having overtaken the Netherlands several years ago. The Bulgarian transport association claims 120,000 drivers, among the lowest paid in Europe, could lose their jobs under the proposed new rules.

“The directive will entail applying numerous national legislations to a month’s salary — control authorities and companies will likely have to deal with up to 20 different national legislations depending on the countries they operate in every single month with up to 50 different minimum wages per legislation, depending on the seniority of the driver, on the truck, on the goods being transported,” according to a declaration by transport and logistics bodies, chambers of commerce, and employers’ federations in 24 EU countries.

Applying the directive “would disproportionately restrict the activities of the vast majority of EU transport companies, especially the small- and medium-sized companies which have less flexibility and resources to lift the strict and heavy requirement; they will likely largely reduce their cross-border activities, withdraw from such activities, or even experience insolvency.”

While politicians grab the headlines over their attempts to cut emissions, the trucking industry is making significant progress towards changing its polluting image. DHL Freight, the road division of Germany’s Deutsche Post DHL, last month introduced the first four liquefied natural gas (LNG) trucks with a driving range up to 1,500 kilometers on its long-haul Europe fleet to explore alternatives to diesel and sustainable long-haul drives.

The industry has a long way to go to give up diesel. Currently there are 1.3 million natural gas vehicles in Europe, of which just 3,000 are LNG-fuelled trucks, according to the Natural Gas Vehicle Association Europe.

DB Schenker, the German logistics giant, launched the first regular test runs of networked truck convoys along a 145-kilometer route between its logistics centers in Munich and Nuremberg on June 25. The trucks are not carrying any loads until early August when the “platoons” will make three trips a day carrying part loads of machinery, drinks, and paper.

“This first use of truck platoons in Germany will set new standards in the logistics market, from which our customers will benefit first and foremost,” said Alexander Doll, DB Schenker board manager for freight transport and logistics.

“The project marks the start of the automated and networked future of road haulage,” said Andreas Scheuer, Germany’s federal minister of transport. “We bring tomorrow’s technology onto today’s roads, testing the intelligent interaction of man, machine, and material. Our opportunities: logistics processes — from ramp to customer — can be made safer, more efficient, and more environmentally friendly. And truck drivers can become modern logistics specialists in digital trucks.”

Meanwhile, there are no signs so far that mergers and acquisitions are about to take off at the top end of the fragmented industry, despite speculation that XPO Logistics, the US firm that bought France’s Norbert Dentressangle for $3.5 billion in 2016, is searching for another European target on which to spend $8 billion. And DSV, which has successfully integrated California-based UTi, which it acquired in 2016 for $1.35 billion, has also failed to meet expectations of another big deal, sparking speculation it could end up merging with a rival, possibly Damco, whose owner Maersk aims to transform itself into an integrated door-to-door transporter — a ‘one-stop shipper shop’ — like UPS, FedEx, and DHL.

But for now the most pressing issue for industry is the impact of Brexit, the United Kingdom’s exit from the European Union in less than 10 months. That could trigger a nightmare scenario of massive truck tailbacks at British, French, and Belgian ports, which will be even worse if London and Brussels don’t cut a deal that achieves trade, as frictionless as possible.

Outlook 2022: Shorter hauls, specialized services coming to the fore in US truckload

Outlook 2022: High demand, disruption remain the norm for US LTL