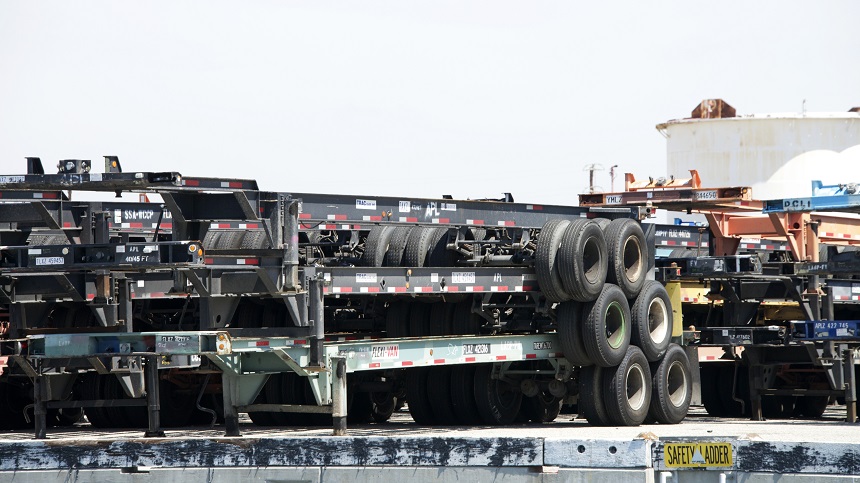 Efficient supply chains contain the premise that for every container there is a chassis available. But don't tell shippers that, as the issue has been a thorn in their side and that of other container trade stakeholders for nearly a decade. (Above: Chassis at the Port of Long Beach.) Photo credit: Shutterstock.com.

The upcoming peak season will be a major test of whether equipment providers, port authorities, and non-vessel operating common carriers (NVOCCs) have done enough in the past year to address chassis shortages plaguing the supply chain in the past.

Efficient supply chains run on the premise that for every container there is a chassis available. Yet the issue has been a thorn in the side of beneficial cargo owners, truckers, NVOCCs, and port authorities for nearly a decade. Although stakeholders are taking considerable steps to address the issues, meltdowns like this winter can irk even the patient shipper. Some relief is on the way, but there isn’t a magic antidote to rising container volumes’ surge and stress on the supply chain.

International intermodal volume is up 6.1 percent this year through May and has jumped 11 percent compared with five years ago, according to the Intermodal Association of North America. There has been an additional 388,150 international containers moved through May than during the first five months of 2014.

The five-year, compound annual growth rate on laden imports at the Port of New York and New Jersey is 4 percent, Port of Virginia is 6.4 percent, Port of Charleston is 7.3 percent, and the ports of Savannah and Houston are 10 percent.

This year, however, demand for drayage spiked in June after a busy winter. In Dallas, Gulf Winds International expects drayage demand to remain hot through July, although this may not translate into a greater use of chassis. With ocean carriers limiting their exposure to store-door contracts, this may not be new business but pre-existing business in which cargo owners now book the final mile.

For inland markets, the current strategy of truckers is show up and hope for the best. When chassis are unavailable, deliveries are late and shippers incur accessorial fees, a common occurence this winter when Class I railroads struggled to keep operations flowing in Chicago and Memphis.

“That’s why we began telling shippers that we are giving them 90 minutes of free time, but if we are not out within that time because of the chassis situation, you’re paying $65 per hour. And you know what? Shippers are not balking because there is such an extreme shortage,” said Steven Teune, operations manager with Acme Transportation of Illinois.

Incremental progress — only so many chassis can be built per year

Even with entrants Milestone Equipment Holdings, American Intermodal Management, and Star Leasing, equipment providers can only chip away at the problem.

A long-term solution will take several years — not months — because there are only so many chassis that can be assembled and so much capital spending available in one year.

"TRAC has invested in and grown our overall marine fleet by over 20 percent since 2013. This growth includes adding new build chassis and acquiring chassis from steamship lines and various leasing companies," said Keith Lovetro, president of TRAC Intermodal. "We’re committed to providing our customers with some of the highest quality chassis available in the industry."

Direct ChassisLink, Inc. (DCLI) is in the process of taking delivery of 3,000 domestic chassis and 5,300 international marine chassis this year with new lights, tires, and brakes. Another 3,100 chassis have been refurbished this year, and the number should be around 6,000 by the end of the year.

“By the end of the year, we will have converted approximately 27,000 marine chassis to radial tires and LED lights. With our domestic fleet, DCLI has the largest chassis fleet with radial tires at approximately 105,000 chassis. We are also refurbishing 500 marine chassis. We have made significant investments and believe we are ready for peak,” said Ron Joseph, DCLI’s chief operating officer.

Port authorities on the East Coast believe the solution to chassis shortages, especially in the peak season, is open choice. If truckers have options, rather than being dictated by the ocean carriers, then shortages will be less likely, according to the theory.

The port authorities in Georgia and South Carolina have submitted an agreement to the Federal Maritime Commission to replace the South Atlantic Chassis Pool (SACP) with a Southern States Chassis Pool as soon as Aug. 2. Although the SACP was already a gray pool, the two ports believe an additional 10,000 chassis — currently at 53,000 — and open choice will be the elixir to peak seasons in the future.

“Volume has grown in the Savannah area 33 percent since 2013, but there’s only about 3 to 5 percent more chassis in the pool. So the numbers aren’t working,” said Griff Lynch, executive director of the Georgia Ports Authority.

The Port of Virginia also has a gray pool, known as the Hampton Roads Chassis Pool II, but draymen have been frustrated with how often chassis are unavailable. Open choice, supporters argue, doesn’t work unless there are enough chassis.

Meanwhile, the North American Chassis Pool Cooperative and Flexi-Van opened a new pool at the Port of New York and New Jersey this May with about 500 chassis. The Council on Port Performance, a port stakeholder committee that works to improve efficiency in the port, said in a February report that there hasn’t been any systemic chassis shortages in the past two years.

“Every year it’s getting better and better, because they are having more and more chassis that are safe and roadable on the first trip,” said Jeff Bader, president of the Association of Bi-State Motor Carriers. He expressed confidence in chassis providers for the peak season.

“I am cautiously optimistic that they will all be ready and I have no reason to believe they won’t be. They have been working very hard to get up for the season,” he said.

NVOCCs go in the other direction

Instead of embracing open choice, NVOCCs are signing exclusive contracts with chassis providers that would in essence restrict choice.

The new agreements — some subject to ongoing negotiations — operate under the similar rules as a store-door delivery but substitute NVOCCs for ocean carriers. These savings can be passed onto the cargo owners, already frustrated with emergency surcharges recently imposed by ocean carriers.

The theory is that under an exclusive contract, truckers would no longer be subject to the fluctuations in general pools. In practice, however, this winter demonstrated that a neutral pool is no guarantee that equipment will be available, especially in Chicago and Memphis.

For shippers, the chassis situation very much depends on geography. Ports in Los Angeles and Long Beach, California, and New York and New Jersey seem ready for what is ahead. Ports in the Southeast United States are taking steps in the right direction, but it will likely take time. But when cargo moves inland on the rails, that’s where chassis shortages could be a problem once again this peak season.