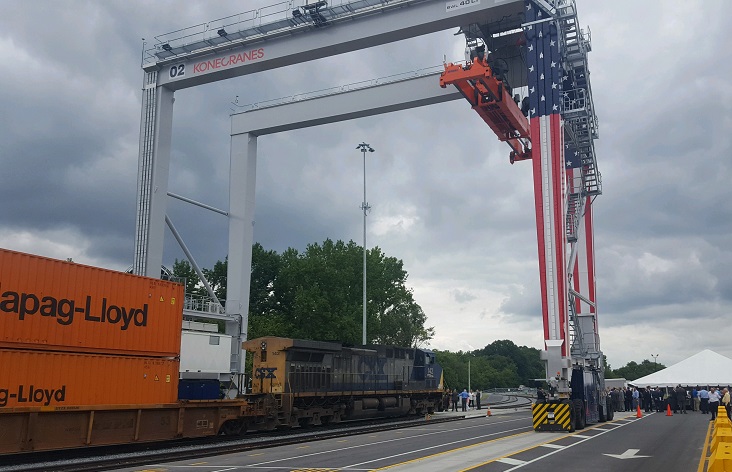 An axiom argues, “Necessity is the mother of invention,” and there’s no better example of that than what tight North American truck capacity has prompted. One example: more shippers in Georgia, Alabama, and Tennessee can now ship their containers from Murray County, Georgia, to the Port of Savannah via CSX Transportation at the Appalachian Regional Port (above), instead of trucking their goods. Photo credit: Ben Banks, TCW Inc.

The tightening North American truck market — albeit far tighter in the United States than in Mexico and Canada, largely because of the electronic logging device (ELD) mandate — is giving extra oomph to freight projects offering shippers options other than the highway.

They won’t solve all the trucking woes, but with Mexico implementing rules limiting how long truckers can drive and Canada moving forward with its own version of the ELD rule, shippers are keen for alternatives. Mexican shippers are already looking to move more goods via rail and shortsea services, and trucking pressures aren’t letting up even if the country’s ocean peak is behind it, said Mario Veraldo, managing director for Maersk Line Mexico and Middle America.

There’s plenty of innovation to crib. More shippers in Georgia, Alabama, and Tennessee can now ship their containers from Murray County, Georgia, to the Port of Savannah via CSX Transportation, instead of trucking their goods. “With the Appalachian Regional Port, we will be able to source the empty containers. Also, it's the same distance from us by truck, but it is closer to the Port of Savannah than Nashville. Cutting that much rail off and keeping the same drayage, we see it as a win,” said Claire Getty, chief financial officer of Thompson Appalachian Hardwoods.

The success of the Greer inland port, serving the Port of Charleston since autumn 2013, has helped drive other efforts through North America. An inland port serving the Port of New York and New Jersey is moving forward, owing to the state comptroller awarding CSX Transportation $19 million for the facility at CSX Transportation’s DeWitt Yard. Pointing to inland ports in the United States, Ashcroft Terminals — which PSA recently took a 60 percent stake in — reckons there’s potential in serving the port of Vancouver, British Columbia, by loading bulk products into marine containers roughly 200 miles from Canada’s busiest gateway.

Because of the Jones Act and the efficiency of the railroads, it’s highly doubtful shippers will see a shortsea network of the likes serving Europe. But there are openings such as in routing Mexican imports through Port of Tampa Bay and PortMiami for final delivery in Florida and the Southeast. Shippers are finding they can not only move their goods cheaper via ocean services, but they can get their goods to their destination roughly two times faster than moving over busy land port crossings.

Container-on-barge services are also enjoying momentum in places where truck capacity is tight and heavy commodities limit drivers’ haul, and there’s limited opportunity for railroads to cut their own rates, sinking barge demand. Volume moved on the Port of Virginia’s thrice-weekly container-on-barge service in the fiscal year ending June 30 rose nearly 23 percent year over year, to about 27,630 TEU.

The barge services, which reduced the need for roughly 54,000 truck loads, save truckers about four hours of driving time by allowing them to pick up loads at Norfolk harbor, giving them the possibility of more daily turns amid ELD-enforced pressures. Shippers not only can guarantee capacity via the barge services but also decrease their transportation spending, as they cut 100 miles of highway transport in favor of cheaper river transport.

Beyond helping shippers secure inland transport capacity, barge services are finding favor as ports look to relieve pressure on their terminals. New York City wants to develop a container terminal in Brooklyn served by barges, while federal grants totaling $1.15 million are driving two projects aimed at moving containers via barge from the Port of Davisville, Rhode Island, to the Port of New York and New Jersey. Every little bit helps.