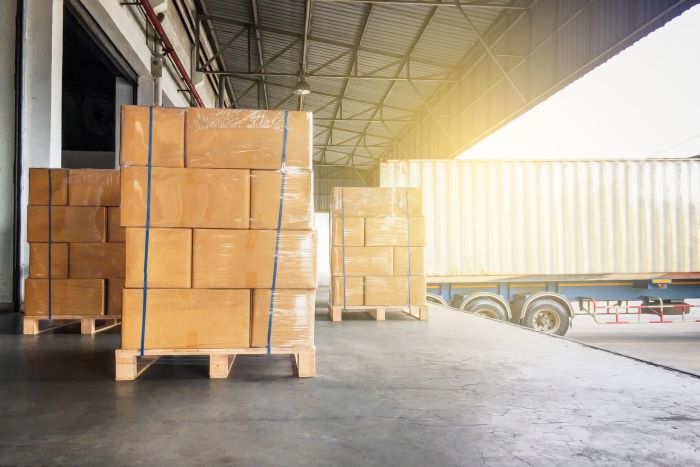 US inventory levels are 5.2 percent higher than a year ago, but dropped in June from May. Photo credit: Shutterstock.com.

US manufacturers and retailers continue to hold onto goods, boosting inventories and depressing demand for freight transportation within the United States, according to the latest US data and anecdotal reports from shippers. But there are signs the inventory reduction or “correction” trucking and intermodal companies have been anticipating for months is coming.

The latest round of trade war tariff increases may once again push inventories higher, however, if US importers again decide they need to rush and stockpile goods from China ahead of threatened increases in duties that will take effect between Sept. 1 and Dec. 15, depending on the type of product. Uncertainty rarely leads businesses to empty their warehouses.

Inventory-to-sales ratios are coming off their most recent peaks, as consumer spending helps reduce overstock. That hasn’t translated into a big increase in over-the-road or intermodal shipments to date, however, although the American Trucking Associations last week reported a 6.6 percent seasonally adjusted surge in truck tonnage in July from June.

In contrast, the Cass Freight Index for July showed a 0.8 percent drop in shipments from June and a 5.9 percent year-over-year decline in freight volumes moved by road and rail compared with one of last year’s strongest months for surface freight transportation. Inventories may be falling, but they are still high enough to dampen demand for trucking and intermodal service.

The best explanation for the rise in inventory: front-loading of imports to avoid higher US tariffs imposed on Chinese goods. Signs of that front-loading are evident in import data from PIERS, a sister product of JOC.com within IHS Markit. The pull forward also was evident in port congestion early this year in Los Angeles-Long Beach and New York-New Jersey.

There are other reasons companies are fattening their stockpiles of goods, however. In some cases, it’s to ensure products are on hand to meet same-day or next-day customer delivery requirements, especially for businesses engaged in e-commerce. Businesses also may be raising inventory levels to achieve short-term sales goals or expand into new markets.

“We increased internal inventory levels to support more demand from our retailers in the coming weeks as we transitioned to the new prices,” Steve Voskuil, CFO of The Hershey Company, said in a July 25 earnings call. The candy maker expects “internal and external” inventories to balance in the third quarter. “We build our inventory this time of the year anyway for Halloween.”

Retailer Home Depot “loaded in” inventory not because of tariffs but to enable expansion and strategic initiatives, CFO Carol Tomé told investment analysts in an Aug. 20 earnings call. Home Depot’s inventory turns in the second quarter dropped from 5.4 a year ago to 5.1 as the company brought in more stock to help with the “acceleration” of merchandise.

The amount of goods stockpiled by US manufacturers, wholesalers, and retailers was 5.2 percent higher in June year over year, although inventories were nearly flat compared with May. That’s an indication that efforts to draw inventories down from heights reached last fall haven’t reduced the amount of goods in storage, rather than transit to buyers, as much as hoped.

On a sequential monthly basis, however, US inventories did decline in June, dropping by $697 million — about 0.03 percent — to $2.035 trillion, according to data from the US Federal Reserve Bank of St. Louis. That’s hardly a landslide, however, and it was the first decline this year. From January through May, inventories at businesses across the US built up 1.27 percent.

Higher stockpiles of goods in port and inland warehouses and distribution centers have contributed to the decline in US freight volumes noted by the Cass Freight Index and other sources since last year, although they’re far from the only factor. High inventories also helped boost US real gross domestic product (GDP) in the first quarter, when GDP rose 3.1 percent.

After the boost from that inventory surge, US GDP growth fell back to 2.1 percent in the second quarter, compared with a 3.5 percent increase in the 2018 second quarter, according to the latest GDP estimate from the US Bureau of Economic Analysis (BEA). The BEA attributed the GDP drop in part to lower investment in inventory and a reduction in US exports.

The increase in inventory has had a marked impact on transportation, starting with ocean shipping. As US importers maintained higher inventories this spring, shipping lines removed capacity by blanking voyages — removing them from port rotations. The increase in blank sailings helps shipping lines manage capacity and maintain spot rates as demand slips.

Trucking companies and railroads don’t have the option of “blanking” trips to manage capacity, but they can refuse less profitable freight. That’s hard for many carriers to do, though, especially truckload carriers, as freight demand drops and they battle for shipments to keep tractor-trailers moving. Parked trucks are a costly last resort, usually when truck drivers aren’t available.

Domestic intermodal volume was down 6 percent year over year during the first half of 2019 and down 7.7 percent in the second quarter, according to Larry Gross, president of Gross Transportation Consulting. US freight shipments overall, including truck and rail, have been negative year over year for eight months, according to the Cass Freight Index.

The status quo on inventories — and freight demand — probably won’t shift until the economy does, led by consumer spending. The good news is consumers opened their wallets wider this summer, and the back-to-school, Halloween, Thanksgiving, and holiday seasons are expected to gradually improve freight demand, as they draw on stockpiled consumer products.

US retail sales increased 0.3 percent in June, reducing retail inventories by 0.3 percent. Retail sales shot up higher than expected in July, increasing 0.7 percent, according to the US Census Bureau. Low unemployment and a 3.2 percent year-over-year increase in average US hourly earnings (16 cents over the past two months) in July helped stimulate that higher spending.

That apparently opened a crack in the inventory ice dam. The seasonally adjusted inventory-to-sales ratios for manufacturers and retailers both dropped in June, with the retail ratio falling from 1.46 to 1.45 and the manufacturing ratio from 1.38 to 1.37.

Those ratios aren’t likely to drop more rapidly, however, without stronger, sustained consumer spending, accompanied by a pickup in manufacturing activity. That would not only demand faster replenishment of inventory, but increase freight demand, reducing the amount of excess truck capacity on US highways. That’s not likely to happen until 2020.