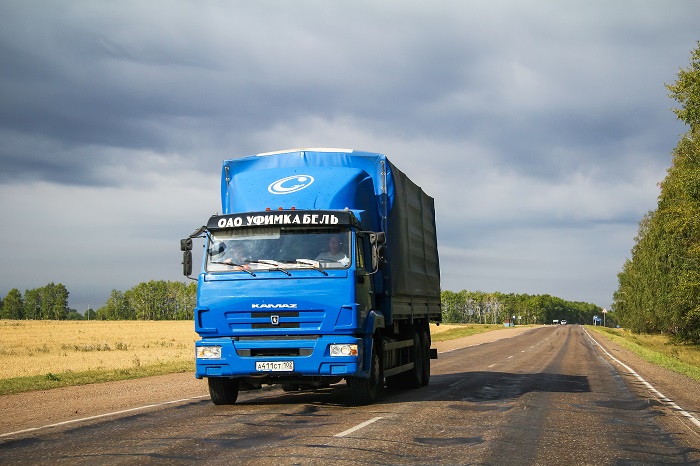 Unlike rail and ocean transportation, Russian auto transport, which accounts for almost 75 percent of all container cargo delivered in Russia, is very non-transparent, with limited statistics available, and that has led to criticism by shippers. (Above: A truck travels on a road in Russia.) Photo credit: Shutterstock.com.

Truck cargo transport costs in Russia may increase 10 to 15 percent in the second half of 2018, due to the Russian government’s announced, substantially tighter regulations for domestic auto carriers and foreign companies operating locally.

The beefed up regulations stem from the law entitled, “On road freight transportations” approved by the State Duma, Russia’s parliament.

The law’s goal is to bring the Russian market for auto cargo transportation out of the shadows and reduce the danger level on Russian roads.

Currently, container cargo via auto transport costs about 35 to 40 percent more than rail transport, but it is also about 50 to 60 percent faster.

Unlike rail and ocean transportation, Russian auto transport, which accounts for almost 75 percent of all container cargo delivered in Russia, is very non-transparent, with limited statistics available, and that has led to criticism by shippers.

Russian authorities say individuals are the major cause of the sector’s problems, which include: accidents and shippers’ losses.

The new law is designed to standardize the market via public regulations, applied throughout the country. The law is expected to create a roster of carriers. Gruzavtotrans, one of Russia’s leading associations, which unites leading local auto carriers, is a backer of the law.

The new law will also restrict truck use by individuals whose trucks have a greater than 2.5-tonne (2.7-ton) carrying capacity. In addition, carriers will have to report on the technical condition of their vehicles and the health of their drivers. As a result, all trucks will contain electronic monitoring devices, called tachographs — the "Platon" system and the GLONASS system.

Currently, Russian auto carriers and foreign companies operating in the local market charge about 18 to 20 rubles per kilometer or $0.45 to $0.50 per mile, a rate significantly lower than EU carriers’ tariffs. However, the new law is expected to increase Russia carriers’ operating costs.

According to data from the Russian Association of International Road Carriers, Russian’s auto container cargo transport market is about $4.78 billion, with foreign auto carrier companies accounting for about half that total.

Leading Russian auto carriers specializing in container cargo transport generally welcome the new state initiative. According to these companies, shippers are ready to pay more to know that their cargo is transported safely and on time.

However, some Russian shippers and transport companies take an opposite position. As Denis Silaev, general director of Transport Company Magistral LLC, a leading Russian transport company in northwest Russia said in an interview in the Russian business paper Delovoy Peterburg, the introduction of carriers’ registration will lead to duplication of the state bureaucracy and will increase transport companies’ regulation compliance costs. As a result, he sees shipper costs increasing by 10 to 15 percent.

Silaev added that another risk for shippers is a change in market providers. Larger transport companies will be strengthened and small- and medium-sized carriers will withdraw from the market. If that occurs, that will decrease competition and increase transport tariffs, Russian transport experts agree.

In 2017, Russia’s cargo transport volume was 236 billion tonnes, with about 30 to 35 percent handled by foreign companies. Moreover, auto transport is considered the most bullish segment of this market, with recent, average annual growth rates of 10 to 15 percent, compared with growth rates of just 1 to 2 percent for the overall cargo market.