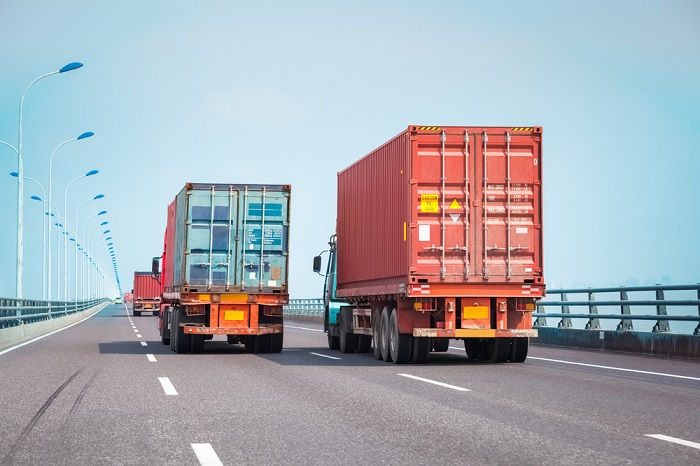 Concerning Asia-Europe transport, forwarders contacted by JOC.com expressed grave doubts at the economics of operating truck shipments across such long distances. (Above: Trucks travel on a highway in China.) Photo credit: Shutterstock.com.

The viability of shipping cargo by truck from China to Europe has been greeted with extreme skepticism by forwarders following news that CEVA Logistics and some partners were planning to launch a road service from Jan. 1, 2019.

A truck left Khorgos on the China-Kazakhstan border on Nov. 13 in a pilot project conducted under the TIR (Transports Internationaux Routiers) initiative, a global system that allows road transport operators to only declare their data once when moving goods across multiple borders. The truck took just 13 days to reach Poland.

The TIR convention has been in operation around the world for more than 40 years, but China joined the initiative earlier this year, allowing the truck to make one continuous road freight journey across Asia without multiple cross-border delays at customs. It was a joint effort involving the International Road Transport Union (IRU), CEVA Logistics, Shanghai Jet-rail International Transportation, and Alblas International Logistics as the operator.

Following the pilot shipment, Torben Bengtsson, CEVA Logistics greater China executive vice president, said trucking freight along the route could save up to 50 percent of the door-to-door cost compared with air and could cut at least 10 days delivery time compared with rail.

“The market is eager for the new product. We have a lot of customers waiting for the start of a regular service. During the coming weeks we will prepare to start regular operations as early as possible in 2019,” he said.

But forwarders contacted by JOC.com expressed grave doubts at the economics of operating truck shipments across such long distances.

Edoardo Podesta, Dachser managing director, air and sea logistics Asia Pacific, said he could not see how the trucking service could be economical compared to rail.

“Customs, road conditions, regulation issues, security, driver shifts, etc., make it a very complicated, risky way of transportation, particularly for high-value consumer electronics goods, which could be tempted by an alleged saving of a few days' transit time compared to rail or even sea-air,” he said.

“Can you imagine a broken down truck full of iPads in the middle of nowhere? Maybe — and it is a big maybe — it could work one day. Perhaps we are now in a similar situation like the first experiments with rail five or even more years ago, but today it seems to me more like marketing than a real solution to customers’ needs.”

Sebastiaan Scholte, CEO of Jan de Rijk Logistics, was equally skeptical. “The cost will be too high in order to be competitive,” he said, pointing out that if a shipper wanted a shorter transit period than sea, the products the shipper was moving would probably have a higher value density to warrant the faster time that would command a greater cost.

One of the partners involved in the China-Europe truck pilot was Jan Alblas, CEO of Alblas (Netherlands), and he said the ideal transport time by road from China to Europe was 10 days. Using his company’s own drivers and equipment would allow that transit time to be achieved, he said.

But Scholte doubted that the targeted transit time would always be achieved. “Roads are not great in all places, and over such a distance there is a higher probability of an accident or other delay, especially at borders,” he told JOC.com.

“Moreover, the trip started in western China close to the border of Kazakhstan. Most of the shipments come and go to and from central and east China. So it sounds interesting that it was from China, but in most cases you have to add a lot of transit time within China.”

Andrew Jillings, CEO of Tigers Global Logistics, agreed that the economics of operating such a long-distance trucking service would not work out. “Trucks break down; there are road conditions to think about, and security — I can’t see it,” he said.

Felix Heger, DHL head of ocean freight Europe, was equally dismissive. “It would not be faster than rail, it is extremely CO2 [carbon dioxide] inefficient and expensive, and I would have serious security concerns,” he said.

The trucking route has become part of China’s Belt and Road initiative that seems to be an umbrella covering all trade or transport projects being developed or planned across Asia. In September, Kazakhstan and China opened a new border crossing at Khorgos to boost transport and trade along the new 5,200-mile western China-to-western Europe expressway. The World Bank predicts the corridor will more than double road freight volumes between mainland China and Europe, with the TIR transport allowing service providers to avoid customs delays at each border crossing.

Umberto de Pretto, IRU secretary general, said trucking on the long-distance route would be a game changer for cross-border transport in China.

“It shows that the system is secure and also highly competitive in terms of cost and time relative to other modes of transport on similar routes. It will boost trade between China and Europe, which will help China and the countries along the Belt and Road route to reap the economic and development rewards of international road transport,” he said.

Shipper demand for a faster China-Europe alternatives to ocean freight is the driving force behind rising rail volume and the rapid development of new services on the intercontinental route. But even as rail does not threaten the far higher volume carried by ocean, it is unlikely road transport will be much of a threat to rail freight.

The rail network has evolved from a series of single shipper-driven services to more than 50. Shippers’ embrace of the mode is deepening steadily, with volume rocketing from 1,400 TEU in 2011 to nearly 319,000 TEU in 2017, according to figures from China rail entities and state media.

When the mainlaind China-Europe rail services first began to take off a few years ago, the transit time fell to as little as 12 days. However, rapidly rising volume and infrastructure shortcomings at both ends of the network has slowed down the voyage times. Asia-to-Europe rail transit is currently around 18 days, but this still compares favorably with more than 30 days by ocean, and the rail option is about six times cheaper than air.

Canada Trade and Shipping Outlook
TPM22: What We Learned — Container Shipping in the Crosshairs
Managing E-Commerce From Order to Delivery and Beyond
END_OF_DOCUMENT_TOKEN_TO_BE_REPLACED