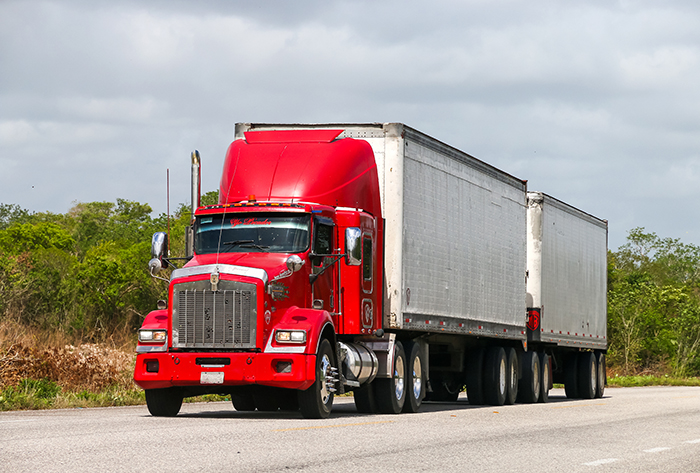 Roughly 80 percent of freight in Mexico is moved via truck, and a ban on double trailers would immediately take capacity off the road. Photo credit: Shutterstock.com.

Shippers fear that a proposed ban of double-tractor trailers from Mexican roads floated as a safety measure would dramatically reduce the country’s trucking capacity, pushing up rates.

Legislators in the Mexican Congress have initiated two separate proposals — one on Mar. 3 and the other in October — seeking to prohibit double trailers from Mexican roads. Supporters of the ban characterize double trailers as an extreme safety risk, pointing to multiple incidents in which they were determined to be the cause. For example, lawmakers have blamed double-tractor trailers for contributing to an accident killing seven teachers in the central Mexican state of Michoacan in June 2013.

The second proposal came about nine months after a government rule took effect that required operators to certify all double-tractor trailers with the government and prove that those trucks were fitted with certain safety features.

While neither of the new laws is close to being passed, shippers that rely heavily on double-tractor trailers to move marine containers say the effect would be sweeping. A ban would instantly wipe out a big chunk of available trucking capacity, put more trucks on the road, adding to traffic and emissions concerns, and increase the cost of moving cargo, perhaps forcing them to use rail instead. Roughly 80 percent of freight in Mexico is moved via truck, according to operators and industry estimates.

Explaining the potential increase in costs as a result of a ban, one ocean carrier executive — who said 85 percent of the cargo moved inland by the carrier goes on double-tractor trailers — said the company already charges an extra 35 percent to move a container if the shipper wants to move it with a single-tractor trailer rather than in a double.

“Our shipping association had a conversation, a meeting with the new transportation ministers, and they asked for input” on the proposed ban, the executive said. “And my input was one line, very simple: total collapse of inland logistics.”

Carlos E. Ortega Garcia, director of traffic and imports at Grupo Axo, an importer of retail goods into Mexico, said the company sends 50-60 percent of its cargo on double-tractor trailers — also known in Mexico as “tandems” (or “fulles” in Spanish) — due to their lower overall cost and higher efficiency.

Other reduced costs include security — the company sends an armed guard behind the truck on some routes due to Mexico’s chronic cargo theft problem, so a double trailer reduces that cost by half — and fuel costs, as moving two trailers in tandem also requires less gas than on two separate tractor trailers.

“If somebody decides to forbid this kind of movement, it’s going to impact us a lot,” said Garcia, adding that it would likely force him to move more cargo by rail.

The rule that took effect June 26 requiring all double trailers to be certified with the government, which although far less restrictive than a ban, was seen by truckers as burdensome and expensive to comply with. The regulations required truck owners to submit paperwork to the government that demonstrated tractor trailers used in a double-trailer formation are fitted with certain features, including anti-lock brakes, a global positioning satellite system, a regulator that restricts the vehicles to 80 kilometers an hour (about 50 mph), and low emission levels. Truckers said enforcement of the rules restricted capacity, at least for a while, as it took time for some operators to certify trailers and others were unable to meet the requirements.

Mexico’s trucking capacity was also squeezed by a separate regulation that took effect in August, limiting the length of time that a truck driver could be at the wheel without resting. The rules require truck drivers to take a 30-minute break every five hours and limit drivers to no more than 14 hours behind the wheel at a time, after which they must take an eight-hour break.

Truckers and ocean carriers, who contract much of the trucking in Mexico through door moves, said the two measures tightened truck availability significantly last year, but some said the impact has diminished somewhat. Others say the government has yet to enforce the laws seriously, and capacity would tighten if it did.

The sector also faces stress from Mexico’s rising trade volume. Cargo throughput at the country’s primary container ports rose 8.7 percent year over year to 5.01 million loaded TEU in 2018 and is up another 7 percent in the first two months of 2019, according to figures from the Secretariat of Communications and Transportation (SCT).

What chance either of the proposed regulations has of becoming law is unclear. President Andres Manuel Lopez Obrador, who took office in December, has said little about the proposals, although one came from two legislators in his own Morena party, which currently holds a majority in the federal legislature.

Mexican legislator Hortensia María Luisa Noroña Quezada, who proposed the law in March, said in a press release at the time that double-tractor trailers account for about 8 percent of the trucks in Mexico, about 40,000 trucks. Other countries, such as Canada and many nations in Latin America, limit the weight that can be carried in double trailers to 45 or 50 tons, compared with 80 tons in Mexico, she said.

The certification requirements of last year were “inefficient; they did not work, they did not increase safety in the circulation of the double trailer, nor did they avoid more accidents,” she said.