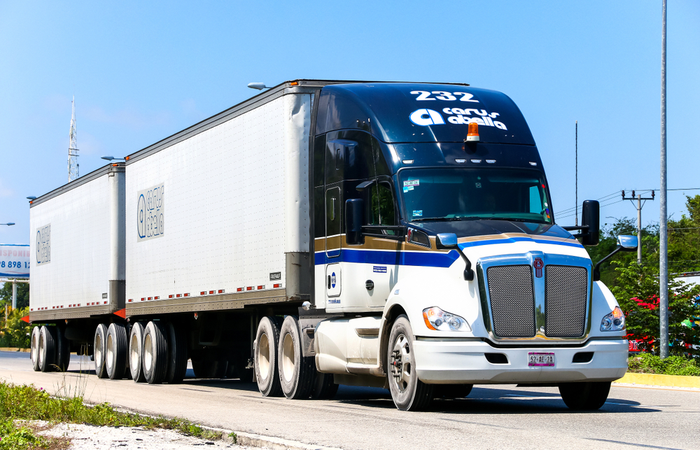 A proposal under consideration in Mexico’s legislature that would cut the permitted weight of double tractor-trailers by 12 percent to improve safety has raised new questions about the impact on Mexico’s capacity to move cargo.

The proposal, introduced in the Mexican legislature on Aug. 14, would reduce the allowed weight of double tractor-trailers from 75.5 tons to 66.5 tons via a gradual reduction of one or one-and-a-half tons each year from 2020 until the full nine-ton reduction is enacted in 2027.

The proposal follows at least two bills calling for a complete ban on double tractor-trailers, which have so far not come close to enactment. The vehicles have come under scrutiny in Mexico — a July 2018 government rule required double tractor-trailer operators to certify their vehicles and show they were fitted with certain safety features, which truckers say, at least temporarily, reduced trucking capacity as operators completed the requirements.

Opponents of double tractor-trailers in Mexico argue the destruction and loss of life when drivers lose control of the vehicles is too great to allow their use. Truckers and shippers, however, say the vehicles are so deeply embedded in Mexico’s transportation system that any restriction on their use would result in a significant loss of trucking capacity. A widely cited figure by industry analysts is that about 80 percent of all land cargo in Mexico is moved by truck, but the figure included in the weight limitation proposal is 56 percent.

Mexico, similar to the United States, is facing a driver shortage, and the country’s trucking capacity was further tightened in August 2018 by the enactment of limits on truck driver hours of service. Some transportation executives said the move contributed to a 10 percent rise in trucking rates.

The weight limitation proposal argues that the country’s transportation system could not withstand the outright prohibition of double tractor-trailers without a freight movement alternative in place. There is insufficient rail capacity, and “we would have to bet on the growth” of rail if double tractor-trailers disappeared, according to the proposal, which suggests that weight reduction would improve safety.

The proposal, introduced by deputy Carlos Elhier Cinta Rodríguez, says that while pneumatic suspension systems improve the stability of trucks in several ways, in part by redistributing the weight, that benefit is diminished when the vehicle is heavily loaded. Reducing the weight would improve stability and reduce damage to roads and bridges, the proposal says.

The proposal states that Canada, the European Union, Spain, and a variety of Latin American countries limit the weight of double tractor-trailers to 63.5 tons or less, with several in the 40- to 50-ton range. Double tractor-trailers are banned in about half the states in the US, and weight limits where they are permitted vary from state to state, with some allowing weights far higher than the existing maximum in Mexico.

Mexico’s National Association of Private Transporters (ANTP), which represents shippers that operate their own fleets and also hire trucking services, took no position on the proposal when asked by JOC.com. Francisco Kim Olguín, vice president of the organization, calling the measure a “political proposal,” said any new rules should “improve safety in all truck transportation aspects, not only for double trailers.”

The president of ANTP, Alex Thiessen, vigorously supported the use of double tractor-trailers when he spoke at the JOC Mexico Trade Conference in Mexico City last month. Thiessen said limiting or banning the use of double tractor-trailers would just put more single-trailer vehicles on the road — increasing the overall number of trucks in circulation, boosting the risk of accidents, and creating more pollution.

“We have been advocating double trailers because they are more efficient,” he said. “They only need one driver. The driver doesn’t need to do so many hours. He doesn’t need to go fast.”