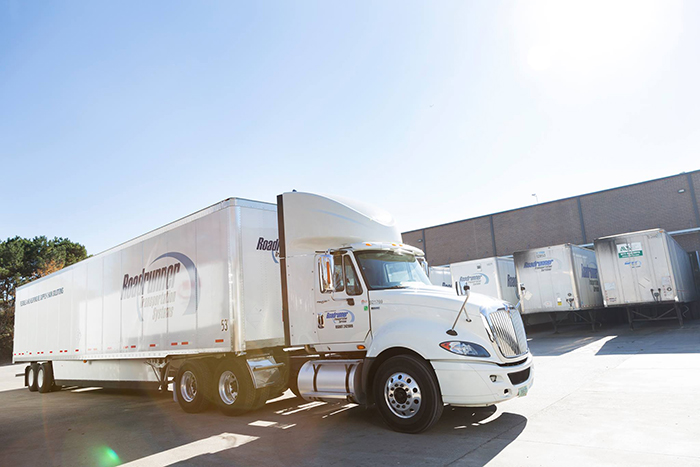 In 2017, Frank Hurst spent his first full day at Roadrunner Freight in a customer call center with headphones on, listening. “That really woke me up as to where the business was going,” the president of the less-than-truckload (LTL) carrier said in an interview Friday. At that time, it wasn’t heading in a direction the carrier or its shipper customers were happy about.

Today, that’s changing, Hurst said. Roadrunner Freight is emphasizing both velocity and quality in customer service while attempting to rebuild a business that suffered during the reorganization of its parent company, Roadrunner Transportation Systems.

Last week, Roadrunner Freight announced reduced transit times across 322 lanes, cutting times by more than a day and a half on average and up to three days when shipments are picked up on Thursdays and Fridays. That’s just the beginning of improvements in LTL service that shippers will see in the coming months, Hurst said.

“The changes we are making are part of a more fundamental process at Roadrunner Freight, which is renewed focus on the customer,” he said. “Let’s be honest, we kind of lost our way around service over the last several years. We’ve paid for it from a revenue standpoint and in reputation. We’ve got to improve the level of service and quality within our company.”

The transit time improvements are just the surface of that effort. Hurst said Roadrunner Freight is investing in automation, both in the back office and on the docks, as customers demand increasingly specific visibility into LTL shipments and billing and invoicing. To those ends, Roadrunner is connecting LTL customers with its transportation management software (TMS), RapidShip.

“The LTL market, especially customers, are moving toward increased automation and visibility,” Hurst said. “We’re talking automation from quote all the way to invoice. We have to find all the ways to remove the historical aspect of the LTL business and integrate with our customer.” Roadrunner will start with an electronic bill of lading (BOL) it plans to roll out shortly.

The reduction in transit times, which affects 36 percent of its network, partly results from automation, Hurst said. “We had to reduce our transit times because shippers are ranking their carriers within their TMS based on price, service, and transit time. When we’re two or three days slower than the competition, we’re not even on page one of the TMS,” Hurst said.

“So it’s not so much what the shippers are telling us to do as where the market is going,” he added. “It’s about speed and reliability and that’s why we’re making the changes we are.”

Those changes start with Roadrunner Freight’s network, which unlike most LTL networks is not based on a hub-and-spoke terminal design. Instead, the carrier uses a long-haul, origin point-to-destination LTL design facilitated by several regional hubs. About half of its linehaul power is provided by owner-operators, and the rest by partner carriers and rail, Hurst said.

The company will have more of its own assets in the mix, including facilities, going forward. “In a conceptual way, they are migrating the business model to one that is asset-light as opposed to non-asset, where they would have a little more stake in the facilities they operate,” said Satish Jindel, president of transportation research firm SJ Consulting Group, which is working with Roadrunner Freight.

“The first thing we have to do is take advantage of the direct loading we have,” Hurst said. The company picks up and consolidates LTL loads in 29 metropolitan markets. “For those markets that don’t have enough freight, we use shuttles that run to a regional hub as release valves,” he said. “We’ll consolidate the loads there and run them direct to their destination.”

Freight used to sit in the origin market awaiting consolidation, Hurst said. “That means inconsistency in service, and in today’s market, that’s not an option.” Today, Roadrunner Freight’s four major regional hubs are in Chicago, Dallas, Atlanta, and Commerce, California. This summer, the company will open a new regional hub in the Northeast, he said.

Roadrunner has the longest haul of any LTL carrier, according to SJ Consulting Group, and many of those linehaul lanes compete as much — if not more — with intermodal rail and truckload as with other LTL carriers. Southern California is a major origin point for Roadrunner’s freight and the company’s largest market, Hurst said.

The LTL carrier runs linehauls seven days a week, which leads to what Hurst calls a “weekend advantage” — the ability to keep freight moving over the weekend. At many companies, that freight has to wait in a terminal or on a truck lot from Friday evening until Monday morning.

Getting back to LTL roots

Hurst’s work at Roadrunner Freight is part of a sweeping, two-year reorganization that culminated in a $455 million rights offering that effectively transferred ownership of Roadrunner Transportation Systems to the company’s new majority owner, Elliott Management.

The reorganization followed a financial implosion at Roadrunner Transportation that began when the publicly owned company’s net profits were discovered to have been overstated by $66.5 million from 2011 through the third quarter of 2016, including overstatements of $19.3 million in 2014 and $22.4 million in 2015.

Roadrunner Transportation had been one of the fastest-growing US trucking companies early in the last decade, acquiring 25 companies after going public in 2010. Most of those were truckload-related companies.

Roadrunner Transportation reported a 13 percent drop in revenue to $1.4 billion for the first nine months of 2019, with a net loss of $266.7 million. Roadrunner Freight had $327.2 million in consolidated revenue in the first three quarters of the year, compared with $342.2 million in the same period of 2018. SJ Consulting Group's Jindel believes the carrier can reverse that decline.

“I have no doubt this company can double its revenue in three years,” he said. “That doesn’t mean they will have to fight others to get share, but shippers will be willing to pay a little premium for service.”

Over the past year, Roadrunner Transportation has sold several of its non-LTL subsidiaries, most recently selling Prime Distribution Services, a retail and food consolidation and warehousing business, to C.H. Robinson Worldwide for $225 million on Jan. 28. In December, Roadrunner sold its flatbed trucking business, D&E Transport, for $30 million.

The resulting company will be more LTL-focused than it has been in a decade.

“We’ve been publicly saying the future of the business that we’re going to focus on is our LTL division as well as our Ascent Global Logistics division,” Hurst said. “Our board of directors and Elliott are more than happy to invest in service quality to improve customer experience. The long-term gains are enormous when we focus on the customer.”

Global Shipping Outlook: A Sneak Peek at 2021
Port Performance North America: Managing Cargo Flow During a Pandemic — and Beyond
END_OF_DOCUMENT_TOKEN_TO_BE_REPLACED