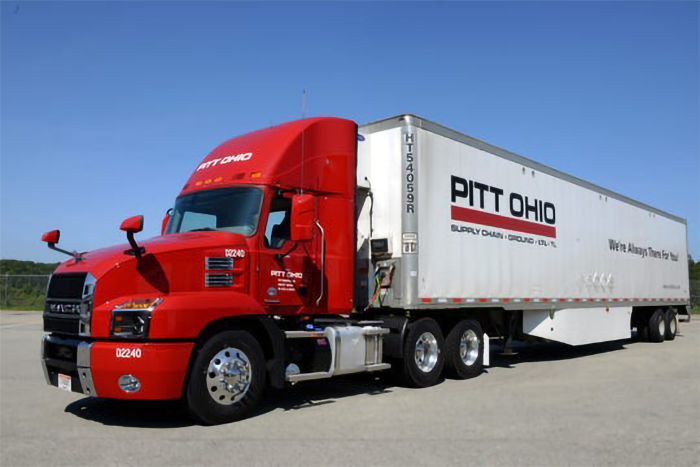 More freight is beginning to flow across the cross-docks of Pitt Ohio, as the trucking company’s customers slowly pull their businesses out of the deepest downturn they’ve ever seen. But business is still a long way from what once was normal. Similar to its counterparts, the regional less-than-truckload (LTL) and truckload operator has had to rethink how things work.

“There’s a whole host of things we had to do to deal with the pandemic, and it kind of reenergized our business strategy, how we think about doing business,” CEO and founder Chuck Hammel said in an interview Monday. Increasingly, how Pitt Ohio wants to do business digitally. That’s been true the past few years, but digitization now is gaining momentum.

Before the pandemic, shifting from paper to electronic bills of lading wasn’t a top priority for shippers, Hammel said. “But now they’ve found all the holes in their supply chains that made their jobs difficult” during the pandemic, he said. “I think in the bigger picture customers are going to want to digitize too,” he said, to gain better control over shipments and inventory.

The coronavirus disease 2019 (COVID-19) certainly has stood many long-established practices on their heads. Since the pandemic began to spread in March, more and more of Pitt Ohio’s deliveries are unattended ones, meaning the freight is dropped at the dock or other locations specified by the shipper or receiver. For shippers, unattended normally would be undesirable.

But amid worker shortages and shortened hours, unattended is becoming acceptable. Pitt Ohio, similar to many other carriers, has stopped making indoor deliveries, too. Shippers have become much more accepting of practices that minimize direct contact between truck drivers and dock workers and other employees, Hammel said, including printing their own progressive number (PRO) stickers.

That means the shipper applies a sticker with a PRO to the shipment before the Pitt Ohio driver arrives to pick up the pallet. Typically, drivers apply carrier-generated PRO numbers to shipments, but if the stickers can be printed by the shipper, time is saved and “social distance” maintained, with the shipment leaving the dock smoothly and quickly.

As the economic slowdown worsened, productivity, in some ways, improved. “There was very little wait time at customers, where in normal times you’d be behind so many trucks,” Hammel said. That in part was because less freight was being shipped, but it also reflects improved shipment scheduling on the part of shippers frenzied demand subsided after March.

“They got to know better what’s coming and when,” Hammel said. “It’s about scheduling, not just about how you turn around the trucks coming in.” That’s one improvement he hopes shippers stick to once the pandemic truly is past and the economy well into recovery. “Let’s hope people don’t just go back to doing things the way they always did. We can be much more productive.”

Not all the changes being made are aimed at gaining operational efficiencies, even when they do. The core objective for much of the change at loading docks is safety, even if safety raises costs. “There are tons of new costs,” Hammel said. “But I don’t see anyone stopping sanitizing anytime soon. Customers have to realize there will be more pandemics in the future.”

That realization will put even more emphasis on technology — whether digital bills of lading and delivery receipts, automation, and business analytics that help identify and eliminate costs. “I don’t think things are going to be a lot different, but COVID-19 will push certain initiatives forward faster as we try to cut steps, cut paper, try to do business in new ways,” Hammel said.

Hammel’s priority now is to get the 250 to 300 drivers and dock workers furloughed by Pitt Ohio back to work. “We went from doing 13,000 bills a day in March to 10,000 at the end of April,” he said. “When you drop that much, you just have to cut back.” Pitt Ohio will bring those employees back on the payroll “as business recovers, and it’s starting to recover now,” Hammel said.

Pick up in expedited, last-mile demand

Pitt Ohio did not see as many customers close their doors in March and April as more retail-oriented carriers with shippers deemed non-essential did. “Many of our customers weren’t shut down at all, they were just slow,” said Hammel. “Many of their customers or suppliers were shut down. As they were able to get parts and orders, they started to ship again.”

As a result, “there’s been a big pickup in expedited demand, throughout the pandemic,” he said. Shippers stretched by rising demand as customers reopen have asked Pitt Ohio to do more “weekend work” and after-hours deliveries, “and we oblige,” said Hammel. He’s also seen demand for last-mile home deliveries rise as more consumers shopped online.

“We’re working on a strategy for last-mile because that’s with us to stay,” Hammel said.

There’s also been a big increase in trucking operating costs that is not being covered in rates, and demand for lower rates, Hammel said. “We’re getting more customers who are rebidding freight” to get lower pricing. “Others are asking for no increase whatsoever. Through February we were getting increases in the 2-4 percent range. Now they’re asking us to wait a year.”

Some customers saw their businesses divide into essential and non-essential segments, he said. “We have one medical supply customer that was off-the-charts busy in one division, supplying masks and PPE (personal protective equipment), but business at their division that manufactures and sells equipment to healthcare practitioners dried up altogether.”

The trucking company took many steps to safeguard its own workers. “We did sanitation everywhere, a couple of times a day,” Hammel said. “We’d spray every truck twice a day, and even all the bathrooms, even though there was nobody around. We sent all but about 5 percent of our corporate headquarters' employees home, all but those who had to be there.” The company gave hazard pay, and additional $2 an hour, to all employees who had to leave home to work.

Only two of Pitt Ohio’s more than 3,400 employees came down with COVID-19, Hammel said. “To have only two employees test positive is good news.” Many of the safety practices and policies implemented to fight COVID-19, including the elimination of in-person company meetings and the use of break rooms, will stick with the trucking operator for some time.

Hammel worries about how that physical distancing will impact the corporate culture he says has been critical to Pitt Ohio’s success since its founding in 1979. “How do you bring a new hire on? How do you train them? I’m concerned about how we maintain our real strong culture when you have people who can’t meet. We’ll have those issues to balance going forward.”

Going forward, Hammel is cautiously optimistic, similar to most of his trucking counterparts. “We’re going to work to get our furloughed workers back. People who want to work from home will continue to work from home. We’re going to work on digitization. Customers have to realize there’s going to be more pandemics in the future.” The company is proceeding with plans to open an off-the-grid, 100-door terminal in Parma, Ohio.

Freight “is coming back, it's been trending back the last couple of weeks,” he said. “Let's hope it's not a blip.” At the same time, he said, “we're not out of this yet.”