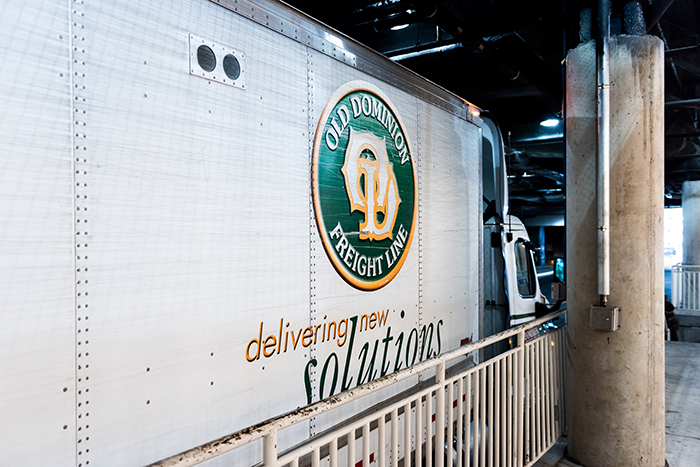 Shipment volumes at ODFL were down 4 percent overall in August, but the carrier says it needs additional LTL capacity in many US markets. Photo credit: Old Dominion Freight Line.

Old Dominion Freight Line is betting on continued economic growth by expanding its own terminal network. The less-than-truckload (LTL) trucking company on Monday said it would open or expand service centers in eight United States cities, from Georgia to Oregon, this month and in October, claiming the facilities are needed to handle additional shipments generated by e-commerce.

“As our customers adjust to growing e-commerce demands, they rely on us to not only accommodate the additional shipments, but to also help them keep their promises to their customers,” Terry Hutchins, vice president of real estate at the second-largest standalone LTL carrier, said in a statement. “OD will continue to invest in new capacity to welcome the growing demand.”

“Our long-term strategic plan includes continual investment in our network to improve efficiencies and increase capacity so when our customers grow, we can serve them,” Hutchins said. “The end goal of helping our customers keep their promises is solidified by our continued investment in new technology and service center expansion.”

ODFL is planning for second-half expansion despite what CEO Greg C. Gantt in August called “continued softness in the domestic economy.” The company takes a long-haul view of the economic cycle and where it wants to be when market softness hardens into higher demand. By year’s end, ODFL will have added or expanded more terminals than in 2018.

The growth is fueled in part by a 20.6 percent jump in revenue in 2018, the best year by far for trucking since the recession, and also by steady growth in profitability that helps ODFL fund expansion during lean times as well as boom times. The company’s network expansion rolled on through “soft patches” in the 10-year US economic recovery in 2012-13 and 2015-16.

The terminal openings and expansions provide evidence the LTL sector isn’t being hit as hard by the current slowdown as the truckload sector, which is struggling with excess capacity, slow demand, and rates that are depressed year over year. Multi-regional LTL operator Saia also is opening terminals, particularly in the Northeast, where it began expanding in 2017.

Some carriers are extending their reach through partnerships, as well as construction. Regional LTL carrier A. Duie Pyle is linking its northeastern network with West Coast LTL operator Oak Harbor Freight Lines to extend its reach to the Pacific and build density in cross-country freight lanes. Pyle also recently opened a new LTL and logistics facility in Saco, Maine.

The first of the new and expanded ODFL sites will debut Wednesday, a 42-door service center in Central Point, Oregon. On the same day, ODFL will hold an open house at a remodeled facility in El Paso, Texas, where the carrier has hired 50 employees to support growth this year. The carrier will host an open house at its remodeled Lubbock, Texas, facility Thursday.

In October, ODFL will open a new 30-door service center in Blackfoot, Idaho, its third facility in the state. Cartersville, Georgia will get a new 104-door service center Oct. 23, and a 63-door terminal opens in Little Rock, Arkansas, on Oct. 24. The Cartersville terminal will help handle growing freight demand in Atlanta, and the Little Rock site will speed Gulf Coast freight.

ODFL is adding 100 doors and 200 employees at its fourth-largest facility, located in Columbus, Ohio. The remodeled breakbulk service center will have 301 doors and 750 employees. The carrier renovated 15,000 square feet of its Chicago terminal, expanding its yard by 20 acres, installing new generators, and renovating the truck fuel system, among other renovations.

All this expansion isn’t just about adding dots to a map, it’s about connecting them. LTL carriers worship at the altar of “density,” and the more density — more terminals, more customers, and more freight — they can build into local markets and intercity freight lanes, the more profitably they operate. And that gives the LTL sector an advantage in the e-commerce era.