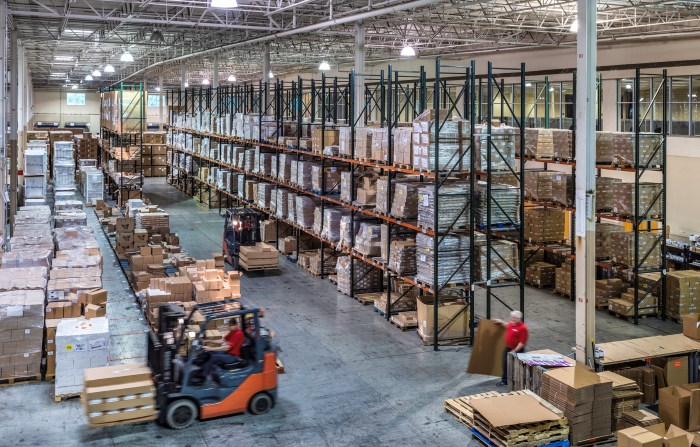 Averitt Express is moving more containerized and transloaded freight through port and inland distribution centers such as its new DC in Houston and this inland site in Nashville, Tennessee. Photo credit: Averitt Express.

Averitt Express increasingly finds itself with one foot on land and the other at sea as it expands portside operations to bring more international containerized freight into its US less-than-truckload (LTL) network. The Southeastern transportation provider has opened an international distribution center in Houston, five miles from the city’s port.

The 250,000-square-foot distribution center, opened in late March, joins similar facilities linking seaports on the US West, East, and Gulf coasts with inland ports, blending drayage and transloading with inventory management, warehousing, and LTL and truckload transportation. Averitt is taking aim at rising containerized imports moving through the Port of Houston.

“This is bringing us a new stream of freight,” said Ed Smith, director of distribution and PortSide services for Cookeville, Tennessee-based Averitt. “The end result is to gather goods on the water to build density in our existing LTL network. That’s the point.” It’s also an example of how the US LTL trucking business is evolving away from its largely industrial, domestic roots.

Averitt, similar to most LTL trucking companies, started out by hauling goods solely between US distribution points, in its case within the state of Tennessee, in the 1950s. Most LTL carriers hauled industrial freight, and while that may still be the majority of their freight, the mix is changing more rapidly as Amazon and e-commerce change and speed supply chains.

“It’s gotten a little crazy,” Smith said of the LTL market. “It used to be pretty predictable, a lot of industrial freight. You had palletized freight that came in to your terminal nice and neat and you could standardize the trailers you used. But we’ve seen more consumer goods starting to come into these networks. E-commerce is playing a role in LTL, with more final-mile shipments.”

“It’s about getting deeper into our customers' supply chain, and grabbing goods at an earlier point,” Smith said. “We can win business while it’s still on the ocean, and we can provide shippers with everything they need as soon as the containers hit the port.” Sometimes that means end-to-end inland transportation, and “sometimes we just fill in the gaps,” he added.

Averitt, the 12th-largest US LTL carrier ranked by revenue, launched its PortSide service in 2006 in Charleston, South Carolina, where Smith is based.

“In places like Charleston, or Norfolk, you find yourselves at extended points of the actual LTL network, while the hubs are further inland in places like Atlanta,” he said. “In Charleston, we needed to make more money with what we had sitting in front of us, and that was the port. I went to them and said we have the trucks, you have cargo, let’s work together.”

At that time, unreliable drayage service was the immediate issue for many shippers or beneficial cargo owners (BCOs), he said, coupled with a lack of warehousing and distribution space. “We had customers say they needed drayage to be more on-time and more fluid, and they needed space to store and ship to DCs and direct to end users,” said Smith.

So, the company built its first hybrid distribution facility: a 40-door LTL terminal with a warehouse attached to it. “The LTL operation is busy in the morning and evening,” Smith said. “So we use the LTL cross-dock for drayage and transloading during the day, when LTL business is idle.” Averitt’s Charleston workforce has doubled since the service was launched, he said.

The introduction of the electronic logging device (ELD) mandate in December 2017, which made it much more difficult for truck drivers to work beyond hours-of-service (HOS) limits, gave the portside business another boost. “We knew there were smaller drayage operations that were not adhering to HOS rules,” he said. “Suddenly, they couldn’t cover anything.”

Increasingly, speeding goods to market is the leading concern of shippers and BCOs, Smith said. “In the beginning, the demand for our services was about on-time deliveries, but more and more we heard from accounts who said they couldn’t get their goods moving quickly after getting them out of the port,” he said. Faster supply chain velocity became the goal.

The Houston distribution center is an extension of Averitt’s footprint on the US Gulf Coast, which includes facilities in Tampa; New Orleans; Gulfport, Mississippi; and Mobile, Alabama. In Houston, Averitt is leasing a warehouse near its LTL terminal to complete its international distribution center, rather than expanding the existing trucking facility, said Smith.

“A few years ago, only a small percentage of the freight our team was handling in Houston was consumer goods,” he said. However, the expansion of the Panama Canal in 2016 led to a rise in the number of Asian services coming into the Gulf Coast as well as an increase in exports from the resin manufacturing sector. That’s meant higher volumes in Houston for Averitt.

Houston has experienced double-digit growth in container traffic for the last three years, according to PIERS, a sister company of JOC.com within IHS Markit.

Resin exports are a key element of that growth, due to the concentration of resin production plants on the US Gulf Coast. Resin exports through Houston rose 51 percent to 392,010 loaded TEU in the first 11 months of 2019, according to PIERS. But Averitt says more consumer goods are flowing inland through Houston’s Barbours Cut and Bayport container terminals as well.

Containerized goods represented 17 percent of total cargo handled by the Port of Houston in 2019, according to PIERS data. Liquid bulk commodities accounted for 69 percent of cargo, with dry bulk, project cargo, and general cargo each representing about 5 percent. Houston’s containerized imports increased 4.5 percent year over year in 2019 and 11.7 percent in 2018.

Averitt’s Houston distribution center opened shortly before the COVID-19 pandemic forced a stay-at-home order and the closure of non-essential businesses in Harris County. As far as timing goes, “that was a disaster,” Smith said. “But some real positive things have happened even though we’re in this negative environment.”

Ports throughout the United States “have done a phenomenal job of staying safe and keeping the goods that are still flowing moving, and as a trucker, we’re doing our part,” he said. Despite the economic impact of the coronavirus disease 2019 (COVID-19), “we’re going to see a bigger boom in the Gulf as the years move forward, and I think Houston will play a big role in that.”