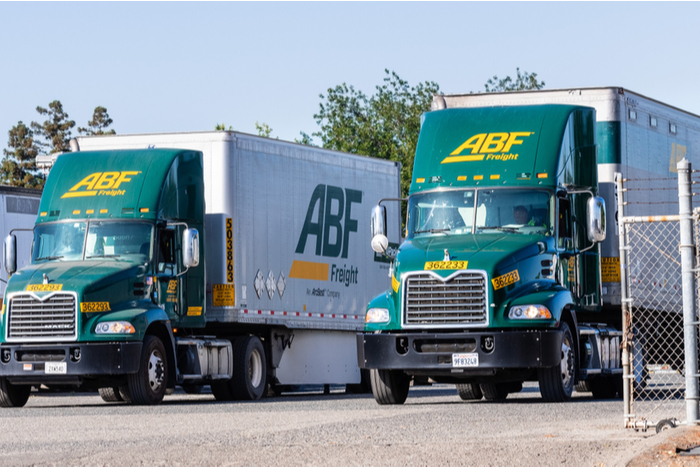 ArcBest’s ABF Freight System is seeing growth in tonnage this year, not because of a resurgence in less-than-truckload (LTL) freight but thanks to technology that helps fill empty space in trailers with transactional (spot) LTL or partial truckload freight. That demonstrates how the company, and other LTL carriers, are improvising in an era of “overall weakness.”

“In January 2020, we are seeing growth in our tonnage compared to last year,” ArcBest CEO Judy R. McReynolds told Wall Street analysts Friday. That follows an 8.1 percent decline in total tonnage per day in the fourth quarter. The secret is adjusting the amount of non-traditional LTL and truckload freight ABF allows into its network.

“We strategically added more heavier weight transactional shipments in December and January that helped fill empty capacity in the network,” CFO David Cobb said during the call, as transcribed by Seeking Alpha. “It’s our normal practice to use transactional shipments to better utilize fixed resources in the seasonally weaker period.”

That’s another example of how the borders between LTL and truckload are becoming more easily blurred as markets swing and technology such as transportation management systems enables carriers and shippers to more quickly shift freight from one type of carrier to another. With the ability to locate empty LTL trailer space, ABF is able to fill it with partial truckload spot freight.

“During the extremely tight capacity market in 2018, we had historically low levels of truckload-rated spot shipments in the network, about the second half of the year through early 2019,” Cobb said. At that time, there was plenty of available LTL freight. “It really comes down to contribution to the network being the driving decision behind truckload-rated business levels,” he said.

Despite that balancing, the “tempered” economic environment pulled ArcBest’s asset-based revenue down 6.5 percent year over year to $513.3 million. There were fewer LTL shipments — total shipments per day in the fourth quarter decreased 7.3 percent — and the remaining shipments were smaller — weight per LTL shipment fell 6.3 percent, ArcBest said.

Shipments put on bulk in January, with total average shipment weight in the ABF asset-based network up 6.5 percent year over year and weight per LTL-rated shipment up 2.5 percent, Cobb said. Still, that pickup in tonnage doesn’t necessarily presage an industrial freight recovery. “It’s kind of hard to determine if we’ve reached the bottom of this downturn,” Cobb said.

Still, despite the drop in freight volume, LTL pricing remains competitive, but “rational,” McReynolds said. She said 2019 saw “solid increases” on top of 8 to 10 percent annualized average rate hikes in 2018 but expects those increases to moderate back to “more normal” levels. ABF Freight hasn’t decided whether to issue a general rate increase for 2020, she said.

The asset-based division of ArcBest — namely ABF Freight System — had an operating profit of $20.5 million and an operating ratio of 96, while the asset-light unit reported an operating loss of $25.4 million attributed to a non-cash impairment charge. The full company had a $5.5 million net loss for the fourth quarter, and nearly a $40 million profit for the full year.

Reynolds made it clear that in an uncertain business environment, the asset-based and light-asset halves of ArcBest are better together than separate. In 2010, almost all of then-Arkansas Best’s $1.7 billion in revenue came from its LTL carrier. In 2019, ArcBest is a nearly $3 billion company, with $950.1 million in asset-light revenue.

That underscores how much of the company’s growth has come not from traditional LTL but from asset light business since ArcBest, then a $1.9 billion company, acquired Panther in 2012 for $180 million. But some of that asset-light growth fed on roots deep in the LTL business. McReynolds pointed to an appliance manufacturer customer as an example.

“They were an existing client for us running at about $430,000 a month in revenue … but they needed damage reduction and guarantee of final-mile deliveries that were on time,” she said. “Specifically for them we created a managed solution involving mode optimization of LTL, time-critical LTL, truckload, and expedite.”

As a result, ArcBest quadrupled that business to $1.8 million a month in revenue, McReynolds said. “Our managed solutions business is growing, our cross-sold accounts have become larger in size and are growing faster than single-service accounts,” she said. “And these accounts also have higher rates of retention, which is a more stable foundation for future growth.”