YRC Freight Doubling Down on Density

YRC Freight Doubling Down on Density 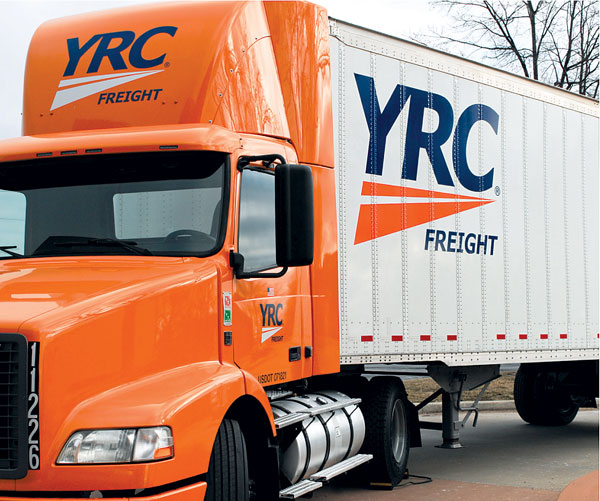 YRC Freight is smaller today than either of its predecessor carriers — Yellow Freight and Roadway — but still not small enough.

The long-haul less-than-truckload operator in March asked the Teamsters union to approve its second network reorganization in two years. In a proposal similar to one approved by the Teamsters and implemented last spring, YRC Freight wants to redirect the flow of shipments through its network. To do so, the company wants to close 29 end-of-the-line terminals and three distribution centers and potentially relocate hundreds of workers. The union, which must approve the change of operations, said it wants to study the proposal in depth before scheduling a meeting with YRC Freight.

YRC Freight isn’t the only carrier traveling this route. Over the past few years, most of the largest LTL trucking companies have reconfigured their networks, cutting hundreds of terminals, redirecting and speeding freight in an effort to boost efficiency, improve customer service, save money and restore profit. Along with YRC Freight, FedEx Freight and Con-way Freight, the largest and second-largest LTL companies, have restructured, not only cutting locations and employees but also rethinking how they provide service and ship freight.

The 10 largest LTL motor carriers reduced their combined terminal count by 18.5 percent from 2007 through 2011, according to Pittsburgh-based research firm SJ Consulting Group.

Much of that cutting stemmed from 2009, when the 25 largest LTL carriers lost 31 percent of their revenue. Four years later, SJ Consulting data shows LTL carriers have yet to fully recover from the Great Recession. 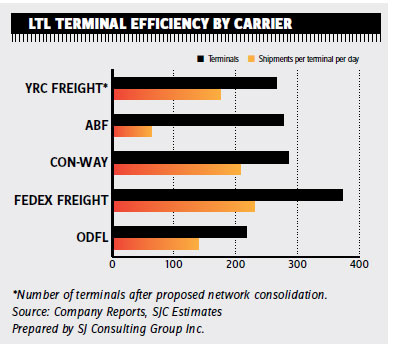 The latest change of operations could give YRC Freight a serious boost, sending $25 million to $30 million straight to its bottom line, SJ Consulting President Satish Jindel said. “That may not sound like a lot, but every million adds up,” he said.

That’s especially true for a company that reported its first quarterly operating profit in four years — $2.8 million — in the third quarter, and increased it to $21.1 million in the fourth quarter, after suffering $61.1 million in losses in the first half of 2012.

The $3.2 billion carrier took those profits as a sign that the restructuring YRC Freight underwent last year to speed freight, reduce handling and claims and build density was working, but YRC Freight obviously thinks more restructuring is necessary. “By realigning our network, YRC Freight will reduce the number of handling and relay locations in order to build network density,” Jeff Rogers, president of YRC Freight, said in a statement. “Better density means fewer empty miles and less emissions.”

After the proposed network changes, YRC Freight would handle 176 shipments per terminal per day, compared with 159 shipments per terminal per day before the 29 terminal closures, according to an analysis by SJ Consulting based on 2012 shipment data. That’s an almost 11 percent improvement in that metric. “By reducing touches and miles, YRC Freight can better utilize its equipment, improve its load average and reduce line-haul as a percentage of revenues,” Thomas Albrecht, a trucking analyst at BB&T Capital Markets, said in a note to investors.

“They’re hitting three key things: their cost of service, transit times and claims,” said Hank Mullen, founder and principal of Dynarates and an LTL consultant. “Their total cost is going to go down. Just think about the equipment that’s coming off the road; that’s huge. And there are fewer fingerprints on the freight, (so) you get better service with less damage. YRC needs to go out and pitch it as adding value.”

As of Dec. 31, YRC Freight operated 295 facilities with 15,572 doors and employed about 20,000 workers, according to its 2012 annual report. After the proposed changes, it would have 266 terminals, fewer than ABF Freight System, Con-way Freight or FedEx Freight, according to SJ Consulting Group.

The proposed changes would result in the loss of 230 jobs, both over-the-road and on-the-dock roles, assuming all those offered work elsewhere accept it. According to the proposal — leaked onto the Web forum truckingboards.com and posted on the Teamsters for a Democratic Union Web site — the reorganization would directly affect more than 1,200 employees.

The truly deep cuts at what is now YRC Freight were made as YRC Worldwide struggled to survive the recession, winning long-term wage and benefit concessions from the Teamsters, renegotiating lending deals with banks, and completing more than one internal reorganization.

As painful as the proposed cuts and relocations may be to those who suffer them, they don’t compare in scale to the massive layoffs and closures of recent years. They may be necessary to gain business from shippers, restore profit and ensure more massive layoffs can be avoided in the future.