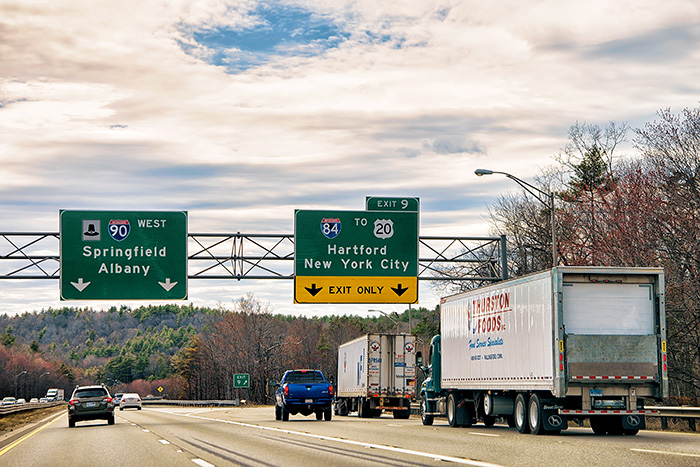 The need to base operations closer to major urban areas
is complicating planning and operations for US trucking companies.
Photo credit: Shutterstock.com.

“Relentless competition” and widespread urbanization are two of the top trends that will reshape trucking and logistics in the US and elsewhere as e-commerce expectations set by Amazon and its customers challenge traditional delivery strategies and processes, speakers at the SMC3 Jumpstart 2019 Conference in Atlanta said Jan. 28-30.

That means problems rooted in truck capacity and driver availability are likely to get worse, rather than better, regardless of the economic cycle.

“For folks in the transportation industry delivering in last-mile, urban environments, what will it mean when e-commerce jumps from 9 to 10 percent of total retail sales to 30 percent?” asked Steve Banker, vice president of supply chain services at ARC Advisory Group. “It’s going to get messy,” he said, as high volumes of freight and parcels collide with delivery restrictions.

“Messy” may be an understatement. Trucking experienced nearly 1.2 billion hours of delays as a result of traffic congestion in 2016, the latest year for which data are available, according to the American Transportation Research Institute (ATRI). Those delays are the equivalent of 425,533 truck drivers sitting idle for a year, ATRI said — an enormous drain on available truck capacity.

Congestion in densely populated urban areas is likely to get worse as urban centers grow, making it difficult to service those areas with existing trucking and freight networks. In 2015, about 81.67 percent of the total population in the United States lived in cities and urban areas, according to the US Census Bureau, with only four states having a rural majority.

“Around the world, people are flocking to cities,” Banker said. “That’s leading to increased delivery restrictions, especially in Europe. You have to pay fines if your truck is too loud; you can’t take trucks into certain areas during the night.” On top of that, “shippers have an increased number of SKUs [stock-keeping units],” he said. “New ‘omnichannel’ flow paths have to be supported.”

The underlying message to the more than 560 transportation and logistics executives at the conference: adapt to these changes or join the other fossils in the La Brea Tar Pits. Both less-than-truckload (LTL) and truckload carriers are scrambling for opportunities in the last- or final-mile delivery market, competing with companies such as XPO Logistics.

The disruption caused by these trends could include a further reorientation of long-haul trucking and truck routes as even more regional distribution patterns emerge. “What’s happening across the country is the development of inland ports,” Walter Kemmsies, managing director, economist, and chief strategist at industrial real estate company JLL told Jump Start 2019.

Kemmsies focused on the need to develop export channels, but new subregional hubs help build the density of facilities, equipment, and lanes needed to better serve suburban and urban consumer markets. “I’m trying to emphasize the transformation of our infrastructure to a world where truck capacity is tighter and we need to think about congestion,” Kemmsies said.

LTL carriers already are feeling the heat as e-commerce-generated shipments that don’t fit the traditional definition of LTL freight pour into their networks. That freight can be an opportunity, or it can be an obstacle if trucking companies aren’t prepared to handle freight that has different delivery requirements and dimensions than typical LTL industrial shipments.

The result will be a spike in localized warehouse demand at a time when warehousing space already is increasingly expensive and hard to come by. “We’ll have more warehouses in urban areas, but we don’t know exactly what they will look like,” Banker said. “Will we have one warehouse in the center of the city for the whole metro area?” Or networks of smaller sites?

With warehouse vacancy rates hitting new lows, an emerging trend is use of retail space to augment or expand storage facilities. Since 2016, industrial real estate firm CBRE has tracked 24 conversions of retail store space to warehousing, including entire shopping malls torn down and rebuilt as warehouses as well as big-box stores repurposed for industrial uses.

In this uber-urban future, “companies that can get their products to companies quicker may have access to a whole group of consumers their competitors don’t,” ARC’s Banker said. That’s a battle already being fought daily through normal delivery channels and new concepts such as crowdsourcing, which 58 percent of the attendees thought would be widespread in five years.

“From a logistics point of view, we’re struggling to deal with that,” Banker said. “For example, a warehouse management system, historically, would take orders and drop them to the floor as a big batch so pickers could save time and labor costs. But that doesn’t work in e-commerce. With short delivery and pickup times, you need to drop orders more quickly and intelligently.”

Artificial intelligence (AI) will handle such tasks, but not by replacing workers, said Pradeep Vachani, senior vice president and head of travel, transportation, and logistics at EXL Logistics.

“There’s this perception that AI will take over the work of humans, and that’s not going to happen,” Vachani said. “It won’t create the Terminator, but it will create Iron Man.”

“We like to think of AI as applied intelligence, which takes on the artificial factor as well as the human factor,” said Spencer Askew, CEO of AI-based software company Teknowlogi.

“There’s a tremendous amount of knowledge in the shipper community. Being able to harness that knowledge and imprint it in your software platform in your company is pretty incredible.”