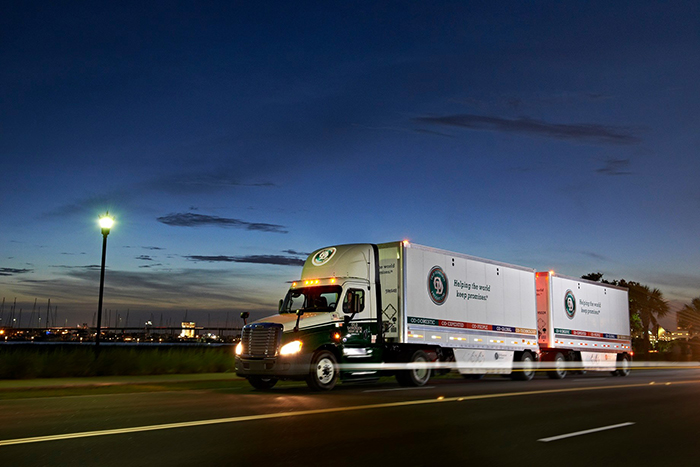 At Saia, shipments rose 1 percent year-over-year last month, after falling 0.9 percent in January, the company said Tuesday. Tonnage at the $1.2 billion company dropped 5 percent from a year ago in January, but only 1.4 percent in February. Saia is the 10th largest U.S. LTL operator.

Saia’s gains were declared shortly after Thomasville, North Carolina-based ODFL announced higher shipments and tonnage. At ODFL, shipments were up 6.1 percent in February and 6.4 percent in January, while LTL tonnage in those months increased 3.2 percent and 2 percent.

ODFL was the fastest-growing LTL carrier by revenue last year, increasing its total market share from 7.6 percent to 8.2 percent, according to data SJ Consulting Group released this week. In the 2014 fourth quarter, ODFL increased shipments 8.2 percent and LTL tons 3 percent.

ODFL also said that weight per shipment declined in January and February, falling 4.1 percent and 2.7 percent from the first two months of 2015, respectively. That may reflect the absence of “spillover freight” from the truckload market, where capacity was still tight a year ago.

“A stabilizing weight per shipment is considered a modest positive relative to underlying economic growth,” Thomas S. Albrecht, transportation analyst at BB&T Capital Markets, said in a note to investors. He noted ODFL’s weight per shipment declined by a larger percentage in late 2015.

The shipment gains may reflect a slight pickup in manufacturing, a major source of palletized LTL freight.

The Institute for Supply Management PMI index of manufacturing activity improved 1.3 percentage points in February, rising to 49.5. Readings below 50 indicate contraction, but last month’s index reading was the best since September 2015, when the PMI dropped to 50.

The ISM also reported growth in new orders and production in February, and faster delivery of supplies to manufacturers. New orders for manufactured goods in January rose by 1.6 percent or $7.5 billion in January, the U.S. Census Bureau said March 3.

Manufacturer’s shipments rose for the first time in seven months in January, increasing by 0.3 percent or $1.4 billion, the Census Bureau said. Shipments of durable goods such as home appliances rose 2 percent.

Will those gains stick in March? Both DAT Solutions and Truckstops.com reported increased spot market truckload demand in the first week of March. DAT’s average national dry van rate rose 2 cents to $1.56 per mile as the number of loads posted on its load boards increased 12 percent.

“While March is still an unknown at this point, volume traditionally accelerates through the quarter as we approach the seasonal second quarter peak,” said David G. Ross, a managing director in the transportation and logistics group of investment research firm Stifel in a note to investors.