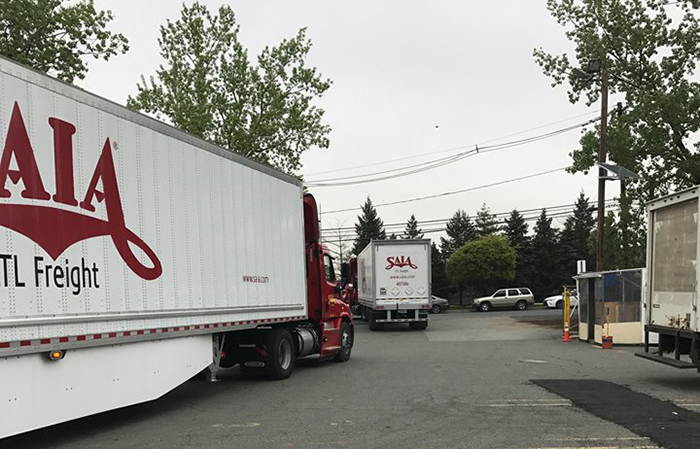 Saia was in 34 states before its push in to the US Northeast.

Less than two months after opening the gates at four less-than-truckload (LTL) terminals in Pennsylvania and New Jersey, Saia is preparing a fifth Northeastern facility for a third-quarter debut, this time in Laurel, Maryland, midway between Baltimore and Washington, DC and off I-95.

The new site “needs to be refurbished” before its trucks are ready to roll, Rick O’Dell, president and CEO of the $1.2 billion trucking company, said last month. The former truck terminal had been acquired years ago by a real-estate developer who hoped to turn it into a mixed high-rise rental and retail property, “one of those work-live-play scenarios,” O’Dell said.

However, “somebody else got ahead of them and built a similar property nearby, so this one went back to trucking,” which was fortunate for Saia. Finding industrial space for a cross-dock trucking operation in the Northeast is a tricky business for a trucker. “You’ve got to find a facility that has some capacity and is zoned properly,” and there are not many large buildings lying vacant.

The multi-regional carrier, the 10th-largest LTL operator in the United States, by revenue, plans to add four to five terminals in the Northeast each year until it has about 20 terminals in the region. “We have a meeting going on right now about our next opportunities, the next five terminals we plan on opening,” O’Dell said at Saia’s Johns Creek, Georgia headquarters near Atlanta.

The goal is to directly connect Saia’s existing network with LTL freight either bound for or coming from the Northeast, the one major US region where Saia has not had a presence. The gap is evident in pre-May Saia service maps, which look like a normal map of the United States until you reach the borders of Ohio, Kentucky, and Virginia. East of them is only white space.

Now Pennsylvania — with Saia terminals in Pittsburgh, Harrisburg, and Philadelphia — and New Jersey, where Saia opened a terminal in Newark, jut out eastward. Maryland will fill in another gap as the company looks north to the mega-markets of New York and Boston.

“We were in 34 states, yet we were missing this big segment of the market,” O’Dell said. It’s a $7 billion segment of an LTL market SJ Consulting Group says is worth $34.9 billion.

About $5 billion of that Northeastern subtotal is longer-haul interregional LTL traffic, and that is Saia’s sweet spot, O’Dell said. “Let’s say you get to a five percent share” of that $5 billion. “That’s $250 million in revenue. About a 20 percent growth opportunity for our organization.”

Saia’s been preparing for this opportunity for some time. The move into the Northeast will cost about $220 million this year alone. In the past few years, “we’ve reinvested in our fleet, we’ve invested in technology” to improve freight flows and crunch data for shippers.

Saia also invested in LTL terminals outside the Northeast to pave the way for its latest expansion.

“If you’re adding five new terminals” in locations from Newark to Pittsburgh to Baltimore/DC, “you also probably need Indianapolis and St. Louis and Cincinnati to be bigger before you’re ready to begin operations,” O’Dell said. Those midwestern facilities will handle much of the freight expected to flow to and from shipper customers in the Mid-Atlantic and Northeast.

Saia is following an imperative for rising LTL carriers: grow or stagnate. Like larger competitor Old Dominion Freight Line, Saia has spent recent decades expanding from regional roots, in Saia’s case partly by acquiring, and being acquired, and partly through organic growth.

Founded in 1924 in Houma, Louisiana, the company evolved as a Southern regional carrier, gradually expanding until by 1987 Saia had 23 terminals in five states and about $50 million in revenue. That year, the Saia family sold their company to Maryland-based Preston Trucking, which in turn was acquired by Yellow, which later became YRC Worldwide, in 1993.

Yellow bolted other regional LTL operations onto Saia before spinning it off in 2002. The acquisition of Clark Brothers Transport in 2004 added 16 states to Saia’s territory, and in 2006 the company sold Jevic Transportation and went public as Saia on the NASDAQ stock market. The company passed the billion dollar revenue mark for the first time in 2007.

O’Dell has been part of Saia’s story since the 1990s. He joined then-Saia Motor Freight Line as chief financial officer in 1997 and served as its president and CEO from 1999 through 2006, when he was named president and CEO of the newly reorganized public company, succeeding Preston and Yellow veteran Herbert Trucksess, now Saia’s non-executive chairman.

Saia's growth picked up in 2014, with revenue increasing by double digits and profits rising as the US economy emerged from a two-year patch of “soft growth” early in the ongoing recovery. When the surge slipped back in 2015 and the economy slumped, LTL shipment volumes and tonnage turned negative, and revenue dropped for five straight quarters.

Business began to pick up in late 2016. In the fourth quarter, Saia revenue, shipments, and tonnage all increased year over year for the first time since the 2015 first quarter. In the first quarter this year, Saia’s revenue rose 9.4 percent on a 3.5 percent gain in shipments and 2 percent increase in tonnage, along with a 7.7 percent jump in LTL revenue per hundredweight.

That uptick is continuing in the second quarter, O’Dell said. “It’s accelerating a little. Shipments in April were up 7.7 percent [adjusted for Good Friday] and I haven’t seen that in quite a while. That’s before the Northeast expansion, so it’s kind of a fixed footprint type of number like same-store sales.”

Figures for May and June, when available, should show some northeastern freight shouldering its way into Saia’s network, adding not just shipments and tonnage but building density. O’Dell was quick to stress that Saia isn’t using price to “chase freight” and fill trailers in the new region. And Saia does not see itself competing much with northeastern regional LTL operators.

“We’re not going to go chase your pallet-rate customer,” O’Dell said. “Our plan isn’t to go up there and buy business.” And the business Saia wants is interregional rather than regional or local. Its competitors are other multi-regional and national long-haul carriers moving palletized freight — companies such as FedEx Freight, UPS Freight, XPO Logistics, YRC Freight.

“Today, we obviously don’t have the network to play in the intra-Northeast market anyway,” where there are a number of established companies, said O’Dell. “Quite frankly, there’s more synergies for us in getting freight moving to and from our network than to do a pallet race.”

For that reason, he does not believe Saia’s entry will have much impact on rates in the market.

“When we’ve expanded into adjacent geographies, whether it be organic or through acquisition, we’ve tended to kind of take share at about a little less than 1 percent per year,” he said. And with investment costs rising, Saia is not interested in sacrificing profit margins for volume.

Many of the leading regional carriers, Pitt Ohio, New England Motor Freight, and A. Duie Pyle, for example, also ship goods out of the region through partnerships with other carriers. Pitt Ohio is part of the Reliance Network, which lets it transfer goods to partners such as Averitt in the South under one bill, simulating the streamlined service of a larger national carrier.

Smaller carriers using standard interline agreements may be threatened by the addition of another large, direct-service operator — unless they demonstrate additional value to shippers. “Regionals such as Pitt Ohio and Averitt are banding together,” Satish Jindel, president of transportation research firm SJ Consulting Group, said.

“What that tells you is that these loose interline arrangements are not meeting the needs of the customer," Jindel said. "Shippers want tighter integration with carriers, and their IT departments can’t support integration with eight, 10, or 12 carriers. So if you’re a carrier for a small region you have to have other value propositions.”

Saia’s value proposition is direct service between the Northeast and the rest of the country, and, through a new agreement with TFI subsidiary TST Overland, with Canada. O’Dell expects extending Saia’s service map will bring increased business from existing customers. “Lowe’s is one of our biggest customers,” he said. “We’re going to pick up business to and from Canada.”

“We have a lot of customer relationships that we can expand under existing pricing agreements,” he explained. “You enhance it a little bit to get more direct pricing as opposed to interline hand-off pricing. We’ve hired experienced sales people [in the Northeast] that are excited about this new opportunity. Now they’ve got a whole network to sell.”

Saia purposely decided to expand into the Northeast by buying property, not a company, O’Dell said. “Obviously, we’ve done that in the past,” he said, referring to pre-recession acquisitions.

However, regional carriers would not necessarily fit neatly into Saia’s 152-terminal network.

“As your network gets bigger, your break [bulk] operation needs to be bigger. And regional players, they may not have a 200-door terminal or anyone to run an operation like that,” he said. “They have certain facilities that are already at capacity. So what did you really buy?”

Saia’s average length of haul is about 800 miles, he said, whereas most regional players “would probably be 350 miles.” And the portion of their business that is interline freight with another longer-haul carrier “is going to go away,” once a company like Saia acquires them.

As Saia builds out its northeastern network over the next four to five years, the company will continue adding technology to optimize the flow of freight within the Northeast and through its integrated multi-regional network. “We’re looking at using predictive analytics and being more proactive from a notification standpoint,” O’Dell said, giving shippers better visibility.

“The challenge really is we have so much data; how do you filter it?” he said. “You have to ask the customer, ‘What do you really want?’ That’s the real challenge.”