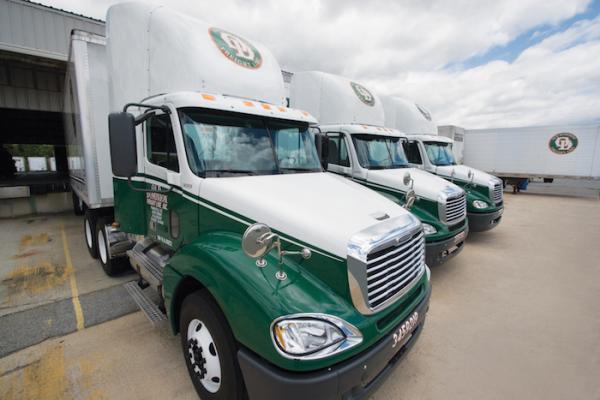 Despite mixed signals from the U.S. economy, trucking companies are moving steadily forward, with freight volumes increasing and contract trucking rates rising in the second quarter.

Landstar hauled more truckloads in the first part of the second quarter than in any comparable period in the trucking company’s history, President and CEO Jim Gattoni said June 4.

“We are pleased with the continued growth in our LTL tons per day, especially with the slowdown of the domestic economy this year,” ODFL Vice Chairman and CEO David S. Congdon said in a statement. In the first quarter, U.S. gross domestic product contracted 0.7 percent from the previous quarter, after expanding for three straight quarters in 2014.

Some of that tonnage is being siphoned away from competitors: In the first quarter, six of the eight public LTL carriers tracked by JOC.com saw tonnage decline year-over-year between 0.1 percent and 8 percent, while ODFL’s tonnage increased 11.4 pecent. ODFL also saw shipments increase 13.5 percent from the year ago quarter. The company last year moved up from fifth place to fourth place in the rankings of U.S. LTL carriers maintained by SJ Consulting Group.

Increased tonnage at ABF Freight System drove revenue up approximately 3 percent in the first two months of the second quarter, the carrier said in a filing with the U.S. Securities and Exchange Commission. Revenue per hundredweight, or yield, was up 2 percent compared with the first quarter, and improved from April to May,  the seventh-largest U.S. LTL carrier said.

ODFL and ABF aren’t the only carriers hauling more freight, according to transportation analysts. “LTL volumes are generally up across the board year-over-year,” David G. Ross, a managing director at the Stifel Transportation & Logistics Research Group, said in a note to investors. The increase in goods shipped is good news for those hoping to see the U.S. economy pick up its pace this summer.

Privately owned carriers as well as the big public companies are reportedly pulling more freight in the second quarter. That should push up LTL revenue back up from its seasonal first-quarter slump.

“I’m hearing that growth isn’t as good as it was in the first half of 2014, but it’s stable,” Michael Scheid, senior analyst at SJ Consulting Group, said. “Carriers are still growing (revenue), perhaps in low to mid single digits. Nobody’s seeing declines.”

Importantly for shippers, LTL pricing has been stable, with year-over-year rate hikes running in the 3.5 percent to 4 percent range as contracts are renewed, Ross told investors. The price increases are solid, if not spectacular. “Some say (rates are rising at) 4 percent plus, but nobody is seeing less than 3.5 percent right now,” Ross said.

Most LTL carriers still need to raise prices “to return to decent margin levels that justify reinvesting in the business (infrastructure and equipment) and pay their driver more, so we expect price discipline to continue as long as industry volumes are flat to up,” said Ross.

Publicly owned LTL carriers made significant strides in increasing revenue last year, when the group of eight carriers tracked by JOC.com boosted combined revenue 7.6 percent to $24 billion. In the first quarter, however, the group increased revenue only 2.7 percent to $5.6 billion. 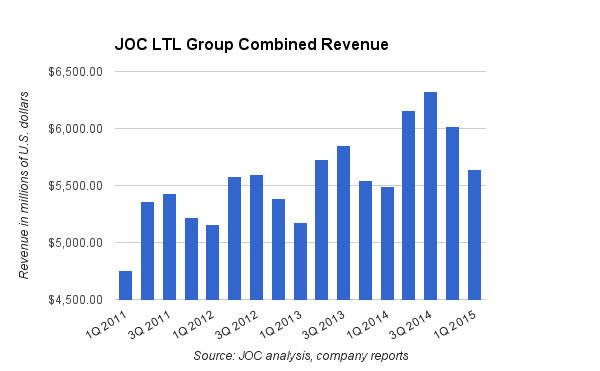 And one measure of profitability, the group’s average operating ratio, rose to 95.1 in the first quarter, which would place the average LTL operating margin at 4.9 percent.

The LTL carrier group should finish the second quarter with a higher growth rate and better margin, based on past experience and the performance data shared by the LTL carriers, reports from other sectors, general economic trends and analyst research. But those gains are likely to fall short of the 12 percent sequential second quarter gain of 2014, thanks to much more moderate economic growth.