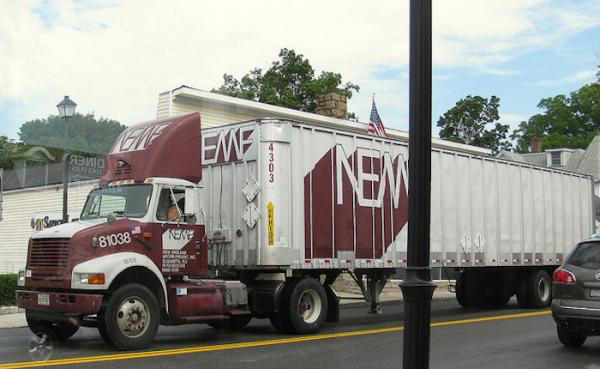 Like a sinkhole that suddenly opens in a busy street, the surprise bankruptcy of New England Motor Freight (NEMF) reveals aspects of the less-than-truckload (LTL) sector that should cause shippers some alarm, or at least reflection. For one, LTL is increasingly reliant on retail freight, especially e-commerce shipments, which can be difficult to absorb and price in LTL networks.

When this freight comes from some of a carrier’s biggest customers, turning away badly priced volume isn’t as easy as it should be, especially if a carrier has difficulty costing this non-traditional freight in the first place. Companies in the LTL and truckload sectors are struggling with this problem as Amazon and other e-retailers demand more freight capacity.

Second, many LTL carriers still run on thin operating margins. YRC Freight, for example, had an operating margin of 2.8 percent in 2018, better than the 2 percent ratio it reported for 2017, but still thin. Businesses with operating margins representing pennies on the dollar have very little flexibility when a financial storm hits them.

“My concern is, how many other LTL carriers are in the same financial health as NEMF, yet unknown by the shipping public?” one shipper asked in an email to JOC.com. Eight of the 10 largest US LTL carriers are publicly owned, and their finances are fairly transparent. Of the next 10 largest, eight are privately owned, meaning they don’t report their earnings publicly.

Some of those companies are expanding at rates, and with a consistency, that indicate profitability — Mid-Atlantic and Northeast carriers Pitt Ohio and A. Duie Pyle among them. NEMF and A. Duie Pyle ranked 19th and 20th, respectively, in JOC.com’s report on the Top 25 LTL Trucking Companies for 2017, prepared from data supplied by SJ Consulting Group.

The 25 largest LTL carriers in the United States took in $33.3 billion in revenue in 2017 and expanded from that base by double digits in 2018, said Satish Jindel, president of SJ Consulting Group, a transportation research firm in Warrendale, Pennsylvania. In its bankruptcy filing, NEMF reported $345 million in total revenue in 2017 and about $343 million in 2018.

The LTL trucking industry, which had about $37 billion in total revenue in 2017, according to SJ Consulting Group, increasingly seems divided between businesses that, thanks to higher profits, are expanding top-line revenue and their footprint and those still working to balance their freight mix and boost pricing to achieve the greater profitability needed for such expansion.

Although industrial freight and manufactured products traditionally are a majority of LTL freight, “retail has become a bigger percentage in the last five years,” Jindel said. “A lot of retail was truckload freight, and then it became parcel. Now it’s become LTL, and companies like Amazon and Home Depot are part of it. They changed their supply chain to speed up delivery times.”

That’s evident in the drop in tonnage reported as LTL carriers add lighter weight retail shipments. Last year, tonnage dropped at many LTL carriers, while revenue and revenue per hundredweight — yield — went up, Jindel pointed out. “Those revenues are up because carriers are recovering the cost of the extra cube. Tonnage being down is not a concern.”

Pulled under by a ‘downward trend’

The causes of NEMF’s bankruptcy and impending shutdown were laid bare in its Chapter 11 petition, filed in the US Bankruptcy Court in Newark, New Jersey, on behalf of the Shevell Group, the owner of NEMF and 10 other transportation-related businesses. Those businesses include truckload carrier Eastern Freightways and warehousing firm Carrier Industries.

The collective debtors “have suffered a downward trend over recent years, which was exacerbated in late 2018 by the unexpected loss of key accounts, the shortage of drivers, [and] a new union contract with onerous retroactive terms,” along with their lenders’ “ultimate unwillingness” to restructure the Shevell Group’s letters of credit, the company said in the filing.

One of those creditors, TD Bank, placed an administrative freeze on the company’s deposit accounts Jan. 25, denying NEMF access to $2.8 million in funds needed for business operations, according to the filing. In the meantime, NEMF’s financial results showed an operating loss of $8.4 million for the fourth quarter and $20.9 million for the full year.

That scotched a Chapter 7 reorganization, according to Vincent Colistra, chief restructuring officer for NEMF and the Shevell Group and a senior managing director with Phoenix Management Services. While NEMF and several other holdings will be liquidated, Shevell Group plans to sell Eastern Freightways and Carrier Industries as “going concerns.”

Shevell Group and NEMF plan to operate the other nine companies “for a short period of time during the liquidation process in order to preserve the value of the assets and minimize further claims against the estate.” More than 90 percent of employees, union and nonunion, will be fired within the first three weeks of the Chapter 11 petition date, according to the court filing.

“For each of their 35 terminals that will be closed, it will take between one and three weeks to deliver all of the existing inventory presently at the terminals to final destinations,” the filing said. NEMF and its sister companies have approximately 1,070 creditors and 3,450 employees. The company sought 30 days in which to compile a complete listing of its creditors for the court.

Although NEMF operated in a territory running from Maine to Virginia and Chicago, the Elizabeth, New Jersey-based carrier partnered and interlined with carriers across the United States, and its closure will send ripples through supply chains from the Port of New York and Jersey to the Mid-Atlantic states, Midwest, West Coast, and into Canada.

The loss of a trucking company with roughly $345 million in annual revenue and about 1,500 trucks and tractors will tighten LTL capacity for shippers in the Northeast considerably and lead to unexpected price hikes as well. LTL capacity in early 2019 has been called anything from balanced to tight, depending on the market, but it’s not loose.

The larger, publicly owned LTL carriers have been pushing price increases in contract talks ranging from mid- to high-single-digit percentages. The loss of NEMF will put more pressure on LTL pricing, at least in the short term, as has happened in the wake of other large carrier failures, such as the collapse of Consolidated Freightways/CF MotorFreight in 2002.

NEMF represents a large share of the northeastern LTL business, and its loss will send shippers scrambling to find space on the trucks of competitors such as Pitt Ohio Express, A. Duie Pyle, New Penn, Ward Transport, and Ross Express. In addition, national and multiregional carriers such as UPS Freight and Saia, which has been expanding in the Northeast, will benefit.

But carriers are likely to charge a premium to shippers trying to replace NEMF. There’s not a lot of spare capacity at most LTL operators to accommodate freight from new customers, said Jindel. The same held true, he noted, when national LTL carrier UPS Freight temporarily shut down its network ahead of a vote by Teamster employees on a second contract proposal last autumn.

Saia is exerting pressure in the region as well. Although the Georgia-based LTL carrier is more focused on longer-haul, multi-regional LTL freight, it has been building density within the Northeast. Saia’s move into the region may be causing a broader realignment of LTL networks, and the demise of NEMF, as it went from thin margins to losing money, may be a result.

“We’re excited about continuing our push into the Northeast,” Rick O’Dell, president and CEO of Saia, said during a Feb. 4 earnings call transcribed by Seeking Alpha. “We've opened 10 terminals in the region since our May of 2017 launch and plan to open four to six new terminals this year.” NEMF’s liquidation will leave several vacant terminal properties for buyers.

In the meantime, LTL carriers already are scrambling to hire experienced NEMF truck drivers. Recruiters from other carriers reportedly have showed up outside terminals and on internet chat groups dedicated to truck drivers. A “severe industry shortage of drivers” was one reason for the liquidation cited by NEMF president and chief operating officer Thomas W. Connery in a letter to employees.

“The costs of running an asset-based trucking company have soared; with labor and benefits consuming an ever larger portion of revenue,” Connery said in the Feb. 11 letter, obtained by JOC.com. “Add in the high cost of equipment, a severe industry shortage of drivers, ever increasing regulations and tolls, technology investments and the overall risk environment.

“After much discussion as well as consultation with outside financial advisors, it was concluded that it does not make sense to continue operations to support a business in which our margins continue to shrink, thereby resulting in significant financial losses,” Connery said. “No one is more devastated than our chairman Myron ‘Mike’ Shevell and his family.”

Shevell acquired NEMF in 1977 and founded the Shevell Group, a family of companies that includes truckload carrier Eastern Freightways, Apex Logistics, and warehousing and supply chain firm Carrier Industries, all of which are included in the Chapter 11 bankruptcy filing. Founded in 1918, NEMF was originally a delivery fleet for National Biscuit Company, now known as Nabisco.

The privately owned company sought concessions last year during labor contract negotiations that were rejected by the union rank and file, Jindel said. “One union and one company need to take very close note of this so they don’t do the same to a much bigger carrier,” he said. That union is the Teamsters, and the company he referred to is YRC Worldwide, now in contract talks.

“Unions need to do what they do for their rank-and-file members, but they need to realize that a company needs to be healthy to do anything for its employees,” he said.

The LTL industry looks to be

Permalink Submitted by engineer_326@ya... on Feb 13, 2019 1:22PM EST
The LTL industry looks to be approaching shipper rate pressure more intelligently than, say, the container carrier industry, but there are still some parallels. Obviously, NEMF isn't exactly the same as Hanjin kicking the bucket, but I think it's a similar gut-check for the industry when a fairly large provider is in business one day and out of business the next. I'm a shipper, but any time our corporate focus turns to rates, I get uncomfortable. It's a hard sell to any shipper to consciously pay more than you think you can, especially when you have to consider your margins vs. your competitors. Driving the rates into the ground are very short-sighted for a shipper, but how does a shipper, collectively, come to the decision that they'll consciously take a rate that's higher than what they think they can get because it's fair to the carrier? And what is "fair?" These are the difficult discussions that I don't know really get much attention, and I'm not sure then really even happen that much despite the continued struggles carriers face in several different sectors of the broader transportation industry.
Trucking Logistics›LTL Trucking Logistics›New England Motor Freight (NEMF)
North America›Canada
North America›United States

Global Shipping Outlook: A Sneak Peek at 2021
Port Performance North America: Managing Cargo Flow During a Pandemic — and Beyond
END_OF_DOCUMENT_TOKEN_TO_BE_REPLACED