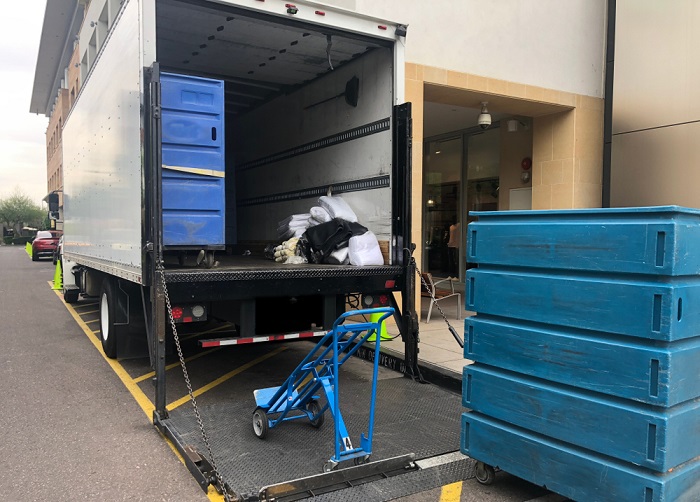 Digitizing the bedrock shipping document would help less-than-truckload carriers cut costs and optimize freight flows while returning some of those gains to shippers. Photo credit: Shutterstock.com.

The drive to automate freight shipping may turn not on driverless trucks but on a slip of paper. The bill of lading (B/L) that accompanies each shipment needs to be digitized, and shippers need to manage the flow of electronic data from their offices and docks to motor carriers, speakers at the Transform 2018 Technology Executive Summit in Chicago this month said.

“You’d be amazed at how many handwritten bills of lading we still get,” said Pat Martin, vice president of corporate sales and strategic planning at less-than-truckload (LTL) carrier Estes Express Lines. “They’re not legible sometimes, and the [freight classification] has been left out altogether. The more we get away from that, the fewer errors get into our system.”

Data from those bills, often sent to the carrier by fax, have to be painstakingly entered into Estes’ freight management systems by hand, which opens the door to transcription errors. But that’s not the worst problem caused by paper bills, said Sam Ralat, senior director of carrier innovation at project44, the Chicago-based technology company that organized the Sept. 12-13 summit.

“It’s not the paper that’s the problem; it’s the pen,” Ralat said. “Two minutes before the driver leaves, you can write something on that paper that dramatically affects the rate,” by changing the classification or the weight jotted down on the B/L, for example. “I want to get rid of that piece of paper because it will take away the ability to just write something on it.”

The potential benefits of digital bills of lading go beyond eliminating manual errors — in itself a big benefit, considering the cost to the LTL carrier to verify weight, classification, and other data; the cost to the shipper of reclassified freight; and the cost of legal disputes and claims. Digitization means data on the B/L can be used in other systems.

“Now that we’re getting the data electronically that we used get on a piece paper, the next step is figuring out how to use this data in real-time capacity planning,” said Justin Hall, chief customer officer at LTL operator YRC Worldwide. That electronic B/L data can also be used to speed invoicing and payment processing for carriers and truck drivers.

The big win, for trucking companies, will be the ability to fine-tune linehaul operations, Geoffrey Muessig, executive vice president and chief marketing officer of Pitt Ohio Group, said in an interview after the event. “If we can get information electronically, and get it earlier in the day, we can build a roadmap for where we need drivers that night based on freight flows,” he said.

“That’s the biggest payoff, reduced empty miles in our linehaul operation, getting freight on the street earlier in the day, and delivering it earlier the next day,” Muessig said. “Shippers win through improved service, and in some cases extended pickup times.” Improved operational efficiencies and lower operating costs should translate to savings for shippers as well.

“We’re prepared to gainshare some of the savings back with our customers, those who are prepared to step up and make this change,” said Muessig. Pitt Ohio is working with LTL customers, on a case-by-case basis, to increase the number of B/Ls it receives electronically from about 15 percent today and help them make the digital transition, he said.

“Ten years ago, the number of  electronic invoices we received was about 5 percent of the total and today it’s 85 percent,” Muessig said. “Our goal is to get our bills of lading [to] look like our invoicing results.” He hopes to double the B/Ls Pitt Ohio receives electronically within six months. “This is one of the most promising areas where shippers can help LTL carriers.”

A paper trail with a long tail

But change isn’t easy, especially when it involves something as venerable and as critical to any transportation transaction as the B/L. The B/L is much more than a list or receipt for goods shipped. It’s a legally binding contract between shipper and carrier and stands as such in court. It can be a document of title to the goods. Its use in shipping goes back centuries.

In trucking, the B/L in use today can be traced back to B/L requirements in the Motor Carrier Act of 1935, which ushered in economic regulation of trucking rates and services under the former Interstate Commerce Commission. Those were the same requirements, with the same liability for loss and damage, as imposed on railroads since the nineteenth century.

Carriers and shippers are both part of the problem. It’s typically the trucking company that issues the blank B/L to the shipper (although there are shipper B/Ls as well). LTL carriers have been reluctant to draw a hard line and mandate electronic transmission of data — especially when many smaller shipper customers lack transportation management systems (TMSs).

Smaller companies don’t necessarily need a TMS to make the transition to electronic B/Ls, however. There is stand-alone software available as well as B/L software that can be integrated into TMS and enterprise-wide financial systems. The issue isn’t truly one of developing or using technology, Ralat and others said, but changing human behavior.

“There’s large muscle memory around this problem,” Ralat said. “Something about the format of that piece of paper, people think it’s magic. But that piece of paper is not doing you any good, and it’s actually enabling bad behavior. We need to go to a more parcel-like experience where you’re using something like a barcode, where it’s more like an airline registration experience.”

That’s music to the ears of transportation consultant Satish Jindel, who has called not for the elimination of the B/L but its automation in the LTL industry along parcel industry lines. Parcel carriers, he notes, have supplied shippers not just with software but even computers to automate the entire package-shipping process, from pickup to tracking and delivery.

Of the more than 47 million parcels shipped on an average day, 95 percent, approximately 44 million, are tendered via electronic manifests, according to Jindel, whose ShipMatrix service at SJ Consulting Group tracks parcel activity. The LTL industry, in contrast handles about 40 million electronic B/Ls in an entire year, about 25 percent of their total, Jindel said.

“Fifty percent of errors result from the transfer of data from paper B/Ls to electronic systems,” Jindel said. “If shippers aren’t getting an electronic B/L from their carriers, they should demand it. Once they embrace it, they’ll wonder why they hadn’t done so much earlier. It will improve internal processes between their departments, including customer service.”

Two factors may drive quicker adoption of electronic B/Ls in the future: rising trucking costs, which are up by double-digit percentages year over year and still climbing, and the need for more-accurate shipment data in supply chains aligned with retailers. As e-commerce expands, pressure on truck shippers to find savings through digitization will only grow.