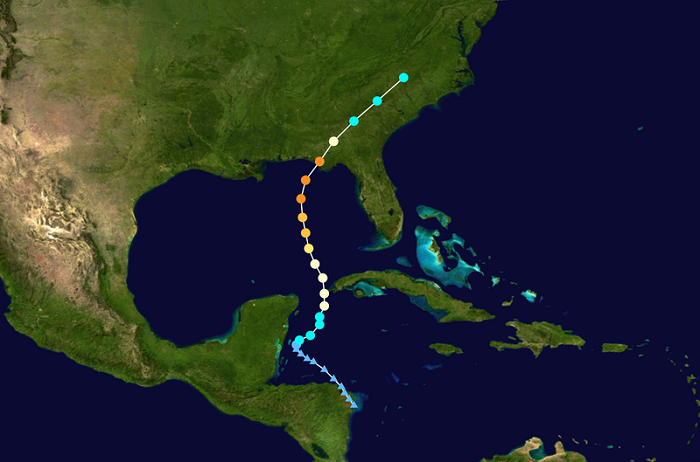 Above: The track of Hurricane Michael/Tropical Storm Michael as of Thursday at 6 p.m. EDT. Photo credit: WikiCommons.

The progress of Hurricane Michael inland and to the north could be tracked Thursday by truck terminal closings from the Florida Panhandle through Georgia and into the Carolinas. Southeastern less-than-truckload (LTL) carriers closed terminals in advance of the storm, and now are working to restore service, as those in the storm’s track deal with power outages and damage.

Impact on US spot market truckload

The storm is likely to push up spot market truckload rates and cause several days of supply chain disruption at least, as shippers and carriers look for alternate routes for freight. Restoration of power and damaged infrastructure also will snarl supply chains, while relief efforts will consume some truck capacity.

The storm, which developed more quickly and struck with more force than Hurricane Florence in September, closed a portion of I-10, a major east-west interstate linking Jacksonville with New Orleans, Houston, and eventually Los Angeles. Railroads have advised shippers to expect delays of up to 48 hours. Images from Panama City, Florida, show a long section of tipped-over railcars.

By Thursday evening, the former hurricane had already reached Washington, DC, as a tropical storm, after dumping enough rain on the Carolinas and southern Virginia to cause flash flooding. Perhaps the best thing that can be said for the storm is that it moved through the Southeast quickly, rather than lingering for days, as Hurricane Harvey did last year in Houston.

The storm is expected to move out into the Atlantic ocean by Friday, after bringing rain to states from Maryland to coastal New England. At that point, shippers and trucking operators will be able to assess any damage and get roads reopened. Portions of I-10 West were closed for 80 miles after the storm, and by 5 pm Thursday, a 75-mile stretch of I-10 East was still closed.

Debris left on roads, including I-10, may be the biggest supply chain challenge for shippers in the coming days, not to mention rescue and relief crews trying to get to hard-hit areas. More than a million homes and businesses were likely without power across several states Thursday, from Florida to Virginia. By Thursday night, seven deaths had been attributed to the storm.

The short-term economic and supply chain impact of Hurricanes Michael and Florence is likely to be less than of hurricanes Harvey and Irma last year. Harvey caused widespread industrial damage when it flooded Houston. Florence hurt the livestock and poultry industries in the Carolinas and disrupted freight flow on the I-95 corridor for a week, forcing detours.

Michael had a much broader reach than any recent hurricane since Sandy, however, doing damage across a large swathe of the Southeast, from Mexico Beach, Florida — the storm’s landing point — to Roanoke, Virginia, and beyond. The storm did not directly hit a major industrial area. Estes Express Line closed two terminals in Georgia and operations slowed at terminals in Alabama, Georgia, and the Carolinas.

Old Dominion Freight Line’s terminal in Pensacola, Florida, was open Thursday, although it was operating at a 70 percent performance level with moderate service delays. “Can’t run east,” the company said on its website. Four terminals in Georgia, however, remained closed. Southeastern Freight Lines closed two terminals in southwest Georgia, including one in Albany.

Unless trucking facilities sustained direct damage, they’ll likely be open again before their customers are able to ship or receive freight. Many carriers keep generators onsite and move equipment to high ground or other terminals before a hurricane arrives. Michael struck so quickly, however, many businesses may not have been expecting its suckerpunch.