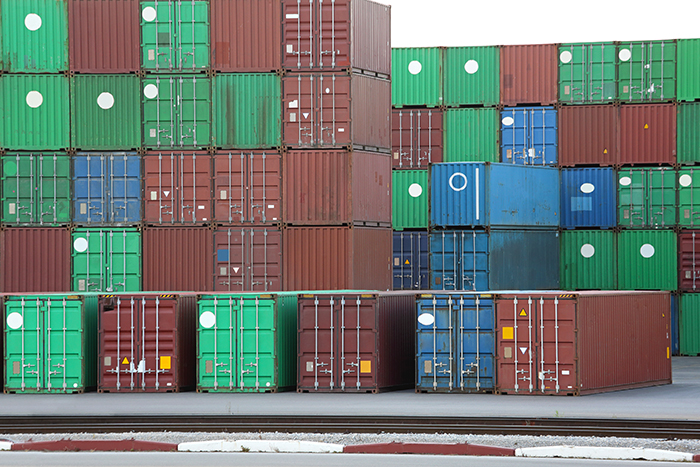 Tightness in the supply of ocean containers is impacting inland transportation.

A growing shortage of ocean containers is raising the cost of getting goods inland and putting more freight into less-than-truckload (LTL) networks closer to ports, trucking companies say. The amount of ocean freight transloaded into domestic trailers as well as intermodal containers long has been growing, but costs associated with repositioning containers are speeding the trend.

“The Hanjin bankruptcy changed the game,” Charlie McGee, vice president of international solutions at Averitt Express, said. Hanjin’s bankruptcy filing Aug. 31 left containers stranded across the United States at port terminals and in truck, warehouse, and rail yards. As many as 200,000 apparently discarded containers leased by Hanjin have still not been recovered.

That’s creating new opportunities for domestic truckers and a challenge for intermodal operators and shippers. The market share of “intact” international container shipments inland dropped in recent years as transloading’s share of intermodal freight increased from 52 percent in 2011 to 58 percent in 2016, according to Larry Gross, a partner at transportation research firm FTR.

Transloading at the ports of Los Angeles and Long Beach as a share of intermodal traffic topped 50 percent for the first time in 2016, according to data from the Alameda Corridor Transportation Authority. The percentage of transloaded containers rose from 47.3 to 50.3 percent last year, while intact container market share dropped from 52.7 to 49.7 percent.

The difficulty finding ocean containers for exports in many inland US markets, exacerbated by the Hanjin bankruptcy, is pushing up the cost of getting containers from ports, McGee said. “The IPI [inland point intermodal] stuff is moving to the hubs where they’ll have the capacity to send them [containers] back again,” McGee said, raising costs to ship to secondary hubs. From those points, containers need to be repositioned for exports.

That’s making the alternative of de-consolidating a container and transloading freight nearer to the port more economically attractive, he said. “Through pricing for secondary hubs has been increased to a point where it encourages you not to buy it all the way through, but to take [freight] out of the ocean container on the West Coast and take it the rest of the way by truck.”

This latest “wrinkle” in the movement of freight inland rides on the back of a longer-term trend toward deconsolidation and transloading container freight closer to ports that is benefiting LTL trucking companies as well as truckload and intermodal operators. That’s evident in the number of LTL firms that are beginning to handle more containers at terminals near ports.

“Everybody is doing business with the ports, whether they recognize or not,” said Don Orr, president of Central Freight Lines, a multi-regional LTL carrier based in Waco, Texas. Central Freight is building a new facility in Riverside, California, to pick up more freight, especially retail freight, in an area flush with not just imports but e-commerce and distribution business.

Beyond Southern California, Orr sees more freight shipped in truckloads or containers from West Coast ports to terminals in Arizona or Nevada for deconsolidation and transloading into LTL trailers. “That’s where a lot of heavy work is being done,” he said. “The amount of building activity for distribution centers in Phoenix is stunning. It looks like Ontario, California.”

Increased transloading poses challenges for LTL carriers, too. “Shifting freight or deconsolidation activity changes the dynamics of freight moving in and out of the region, it changes the balances” in terms of equipment, drivers, and property, Orr said. “It changes how you work with customers.” It also changes types of equipment and real estate needed.

“I have been seeing some new terminals being built in the Inland Empire; in fact we finished one in late 2015,” said Joe Finney, chief operating officer of The Dependable Companies, a Los Angeles-based transport operator. “I see the issue as everyone is out of available room, land is cost prohibitive closer inland, driving lease rates on old facilities through the roof.”

Roadrunner Freight recently opened a terminal in Northern California, near the port of Oakland, quadrupling its capacity in the region and picking up more transload business. “Intuitively, I’d agree there’s more freight being transloaded” into LTL trailers, Grant Crawford, president of the LTL division of Roadrunner Transportation Systems, said in a recent interview.

Price fluctuations aside, there’s a growing supply chain need to deconsolidate containers closer to the coasts and make greater use of domestic transport networks, McGee said. “Folks are retooling their supply chains because it doesn’t make sense to send your entire inventory to Kansas City and then turn and send one-third of it back to the West Coast,” he said.

Not just the West Coast, he said. Averitt sees increased opportunity for transloading on the East Coast, thanks in part to the fallout from the West Coast port labor dispute of 2014 and 2015. The Tennessee-based carrier has a transloading and LTL terminal near the port of Charleston, South Carolina, and plans dual-use facilities in Savannah, Georgia, and Norfolk, Virginia, McGee said.

“Our combined facility in Charleston looks like a box with a finger on it,” McGee said. “The finger is a cross-dock there to serve the pure LTL business we have as a trucker, and the box is for transload and warehouse business.” There’s often a distribution and storage component to transloading absent from pure LTL trucking, with freight being stored until needed, McGee said.

“We’re making sure we can service the transload business at ports as well as the trucking we normally do,” he said. And importers only have to deal with the one company as freight moves from the international container side to the domestic side of the supply chain. “It’s easier to move a shipment that’s already at your location. There are all kinds of economies of scale.”