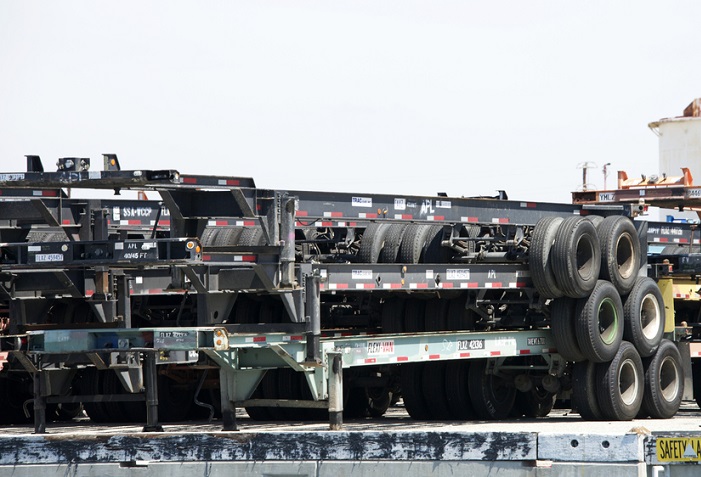 An unpredictable influx of tariff-related freight has constricted chassis supply, emphasizing the need for new solutions. (Above: Chassis at the Port of Los Angeles.) Photo credit: Shutterstock.com.

The container chassis, a low-tech construct of steel, rubber, wiring, and lights, is simple in form and function. But it is increasingly difficult to get one. Without international chassis at a marine terminal or intermodal rail ramp, supply chains get much longer and costlier as businesses struggling to bring goods into the US are discovering this month.

The container chassis shortage ranks with the truck driver shortage as a perennial issue that returns to disrupt supply chains whenever freight demand surges. In December, volatility brought on by the threat of higher US tariffs pushed the supply of chassis at many US ports past the limit, delaying cargo for weeks and adding thousands of dollars in demurrage costs.

The disruption caused by that “pull-forward” of spring retail freight typically shipped later in the first quarter handed US logistics managers their first freight crisis of 2019, making the transportation of goods across a landscape made slippery by storms and frigid temperatures more difficult. In some areas, goods are piling up outside already full warehouses.

The sudden volatility warns shippers what to expect from 2019, but it also calls them to action. There are multiple reasons for the chassis shortages, and they exceed simple supply-and-demand imbalances. The shortages are as much a creation of competing commercial interests and misaligned management as a lack of assets at terminals and ramps.

There’s no single solution to the chassis problem, and the causes of shortages may vary from region to region, but new approaches to this repetitive crisis are needed. If 2018 was the year of the truck driver, 2019 may finally be the “year of the container chassis,” or at least the year when the vulnerability of importers to chassis shortages is fully exposed and understood.

Out-of-the-box thinking is needed to correct the situation and guard against future shortages, but out-of-the-box thinking is hard. What’s really hard is getting past the interests of many parties in the containerized supply chain that weigh against changes to how chassis are supplied and managed, including the interests of beneficial cargo owners (BCOs).

Chassis shortages have only worsened since 2009, when ocean carriers that traditionally supplied chassis in the US, led by Maersk Line, began to exit the market. Ten years later, cargo owners, port authorities, truckers, chassis providers, and ocean carriers will have to roll up their sleeves to find universally acceptable solutions to increasingly frequent shortages.

Chassis supply also is being constricted by the same tariffs causing a surge in trade. China International Marine Containers (CIMC) is the largest global supplier of chassis, and tariffs slapped on Chinese imports last year have already increased US prices for international chassis by $1,000 per unit. A 25 percent tariff could add $3,000 more to the equipment price tag.

Because of the tariffs, the North American Chassis Pool Cooperative (NACPC) has chosen to refurbish chassis this year rather than buying new equipment. In prior years, NACPC purchased thousands of new CIMC chassis annually. “We will only buy new chassis if there is enough demand and our refurbishment program is not adequate, but that would be a worst-case scenario. This is a big change for us,” said Dave Manning, executive chair of NACPC.

Cheetah Chassis and Hyundai Translead believe they can double their domestic output, but chassis providers don’t think it will be nearly enough to meet demand. Prices on these domestically manufactured chassis are also rapidly rising, Manning said. He said because of steel tariffs, a US-built chassis is 20 percent more expensive than a year ago.

Even with more US chassis entering the market, it’s becoming clear that it’s going to take more than assets alone to move forward from costly and energy-sapping dislocation.

Too much freight, far too fast

Some say the current crisis isn’t a shortage of chassis but an overabundance of freight. “Anyone that had a crystal ball that saw the amount of cargo that was going to move inland as a result of the political situation has a better crystal ball than most in the industry,” said Val Noel, executive vice president and chief operating officer at equipment provider TRAC Intermodal.

Containers piled up in Union Pacific Railroad’s Marion facility in Memphis this month. “We have containers sitting at the UP that have been grounded for over a week because there are no chassis available with charges being billed to importers of record,” said Neely Mallory, president of Mallory Alexander International Logistics. “I am talking about thousands of dollars this week alone.”

TRAC expanded its chassis fleet in Memphis by 35 percent in 2018 and 10 percent in January, and is still struggling to supply enough chassis to meet demand. “We have enough chassis,” Noel said, “but the dynamics are going in the wrong direction,” and control isn’t always in TRAC’s hands. “This isn’t a supply issue; it’s sheer demand going out of everybody’s control.”

That demand materialized on 34 extra-loader vessels — in addition to regularly scheduled ships — that have called at Los Angeles and Long Beach since November, pushing imports up more than 20 percent in December. It may be weeks before importers who concentrated pre-tariff shipments at LA-Long Beach choose final inland destinations for that merchandise.

In addition to overwhelming the marine terminals, which gear their operations for regularly scheduled weekly calls by 10,000-14,000-TEU vessels, the extra-loaders placed an unprecedented strain on warehouses throughout Southern California, discharging spring merchandise in December that wasn’t supposed to arrive until January-February.

The freight continues to sit in the approximately 1.8 billion square feet of industrial space throughout Southern California or in loaded containers on chassis scattered throughout the region. And Chinese goods continue to arrive at US ports in advance of the Lunar New Year Feb. 5. As the tariff hike was delayed until March 1, more “front-loading” may be coming.

At the Port of New York and New Jersey, supplies of chassis are lower than usual as dwell times, the time in which chassis are out of the depot on assignment, have gone up. Both Direct ChassisLink, Inc. (DCLI) and TRAC Intermodal, the largest chassis suppliers to the port, have said they don’t expect the shortage to last long, but the short-term impact has been extreme.

TRAC sent a bulletin to customers in the first week of January urging them to return long-dwelling equipment, claiming some chassis had been out more than 15 days.

The elevated dwell times are largely the result of the increased cargo volumes heading to leading retailer distribution centers in the Northeast, Mid-Atlantic, and Midwest. “Motor carriers are under pressure to move containers and chassis off the port terminals” and so they store containers on top of chassis until inland warehouse space for the cargo opens up, Polli said.

Problems have been particularly acute at APM  terminals, which asked one ocean carrier to divert vessels to another terminal. Drayage companies report horrific conditions, with drivers forced to relieve themselves in buckets in truck cabs while they wait hours to pick up a container. “If you don’t bring your own food or water, forget it, you’re dead,” one dray operator said.

This is reality on the home front of a trade war meant to change Chinese business practices: drayage drivers using their own trucks as toilets while waiting what some would call a full working day to pick up a single container. Many of them will run out of legal working hours before they’re able to get a chassis and deliver that container to its next inland location.

Shippers or BCOs desperate for chassis should check behind their distribution centers. With warehouse space in many markets maxed out, retailers are storing import loads on chassis in their yards, or anywhere else where they can find space. By tying up chassis for weeks at a time, BCOs helped precipitate chassis shortages in several regions.

In Memphis, TRAC has seen the number of customers with chassis out more than 15 days rise by 20 percent from a year ago, while those with chassis out 11 to 15 days is 30 percent higher than last January, Noel said. “We are continuing to inject more capacity into the market, and we are collaborating with some of our users with units out on the street,” he told JOC.com.

“Everybody’s got a challenge they have to meet,” Noel said. “This isn’t a carrier issue, or a shipper issue, or a chassis provider issue, it’s a political issue. It will be interesting to see what happens if our government kicks the can down the road another 90 days.” TRAC is increasing its safety stock of chassis in key markets to guard against future spikes in demand.

The ports of Charleston and Savannah are pushing an outside-the-box idea to solve regional chassis challenges. The South Carolina Ports Authority (SCPA) and Georgia Ports Authority (GPA) are planning to launch the Southern States Chassis Pool, supporting an “at-cost” chassis leasing model run by the NACPC.

This cooperative would exchange the low rates on carrier haulage and high rates on merchant haulage with a single rate in the middle on all cargo. The launch date for Southern States — originally Jan. 1 — has been delayed, however, because ocean carriers and chassis providers worry about the impact on existing contracts with cargo owners and overall profits.

Shipping lines have made “a variety of commitments to their customers, and their arrangements with chassis suppliers are the basis for many of these commitments,” said Jeff Lawrence, executive director of the Ocean Carrier Equipment Management Association (OCEMA). “Disrupting those arrangements in the middle of a contract would be very problematic.”

That’s an example of how conflicting business interests often snub cooperation across the supply chain. Another example: truckers bringing their own chassis to UP’s Global IV terminal in Joliet, Illinois, have been turned away. In this case, the contract under which containers move is subject to restrictions imposed by Ocean Network Express (ONE) and Evergreen Line.

Under carrier haulage, an ocean carrier directs draymen to use specific chassis. Evergreen and ONE use the Chicago and Ohio Valley Chassis Pool (COCP), administered by Consolidated Chassis Management (CCM). Frank Klimala, a terminal manager with Horizon Freight System, believes box rules should be suspended until the current equipment imbalance is resolved.

“If you have to charge us for a lift, charge us. Our BCO would rather have their box delivered than sitting,” Klimala said in an interview last week. “They will pay the extra money for my chassis if it means their box isn’t sitting for days or weeks. The ocean carriers should instruct UP to allow our chassis. Let’s get as many boxes out of there as possible.”

The process is complicated, however, according to one source, who said unearthing containers when truckers arrive with their own chassis would disrupt terminal operations. Jon Poelma, president of CCM, said spot shortages in December in Cincinnati, Ohio, and Detroit prevented an injection of chassis into Chicago. Those situations have been resolved, he said.

Knowing how many containers to anticipate in an unusual situation such as the trade war is only the first problem for chassis providers such as CCM. The next is knowing where that freight will go. “Is it going to Global IV in Chicago, is it going to BNSF [Logistics Park Chicago], or is it going to the Ohio Valley? We had a decent forecast but not accurate enough,” Poelma said.