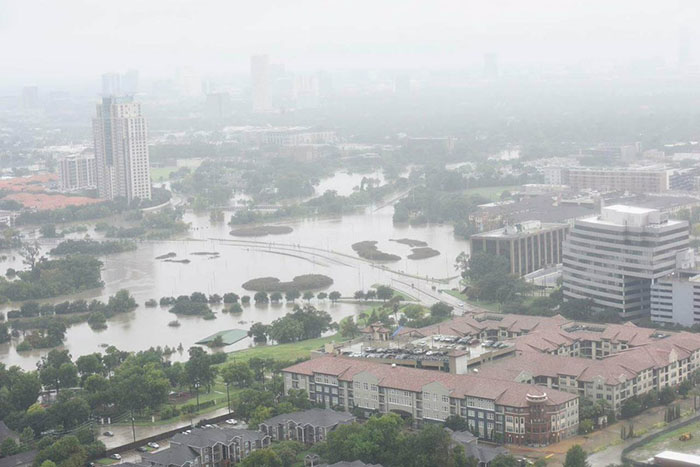 The National Weather Service said of Hurricane Harvey: "This event is unprecedented and all impacts are unknown."

Floods ravaging Houston and surrounding Texas counties have interrupted freight transportation in the fourth-largest US metropolitan area and caused damage and disruption that will affect logistics for weeks or even longer.

Most of the area’s main highways are impassible at key intersections, and are expected to remain that way for days. Nearly 30 inches of rain have been reported in some parts of Houston, and the National Weather Service said the total through Friday could reach 50 inches.

Hurricane Harvey and its aftermath have interrupted truck, rail, sea, and air transport, as well as activity at warehouses and refineries and petrochemical plants such as ExxonMobil and ChevronPhillips facilities near the Houston Ship Channel.

Truck spot rates in the region are expected to spike, and freight backlogs will delay deliveries once the floods recede. Logistics operators said a return to normal activity will be slowed by the need for inspection and repairs, and by workers’ transportation difficulties and need to tend to flooded homes. State officials have urged non-essential personnel to stay off the roads until emergency operations end.

Freight operations started shutting down in coastal areas of central and south Texas last Friday in advance of the storm, which landed at Port Aransas, near Corpus Christi. The Category 4 hurricane hit land with sustained winds of 130 miles per hour, but weakened into a slow-moving tropical storm that continues to dump rain on the area.

With severe weather forecast to continue through Thursday and rescue operations still under way, few details are available on damage to warehouses and inland depots. Port Houston facilities apparently had minimal damage, but access to them remains limited by flooded roadways.

The US Coast Guard said the vessel traffic at the ports of Houston, Galveston, Texas City, Freeport, and Corpus Christi will reopen when channels are deemed safe. The Port of Brownsville, south of the storm zone, reopened Saturday morning.

Port Houston terminals halted work at mid-day Friday and will remain closed Monday. "We will continue to monitor the developing weather conditions to determine whether operations can safely resume on Tuesday," port spokeswoman Lisa Ashley said.

At Corpus Christi, the closest port to the hurricane’s landfall, port officials said an initial survey showed light to medium damage, and that work was under way to restore power to terminals.

The Port of Galveston escaped serious damage, but four cruise ships that were scheduled to dock at the port were diverted to other ports.

Port Freeport’s channel lost five to seven feet of draft, according to the local pilots’ association, the Houston Chronicle reported. Maintenance dredging will be required to restore the channel to its 45-foot depth.

BNSF said its Houston intermodal automotive terminals at Pearland, just south of Houston, were open but that flooded roads prevent access and that train loading and unloading have been suspended. BNSF said it is rerouting some traffic and that customers should expect continued shipment delays.

Union Pacific has canceled trains to the area through at least Monday and embargoed shipments, and said switching in Houston and surrounding areas would remain suspended for at least another 48 to 72 hours.

Kansas City Southern suspended service between Houston and Laredo and embargoed cross-border traffic via Laredo and Brownsville/Matamoros, and from connecting carriers to specific areas affected by the storm.

Houston’s two major airports, Bush Intercontinental and Hobby, were closed indefinitely because of of flooding on nearby roads. At Hobby, on the city’s south side, access roads were reported Sunday to be submerged in four feet of water.