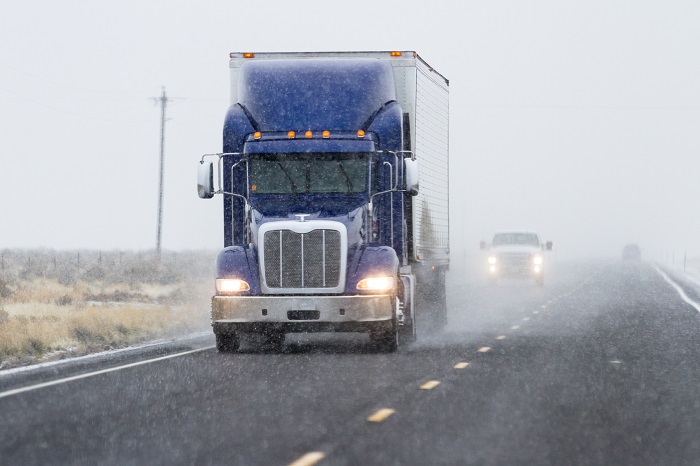 At the end of 2017, national average spot market rates were higher than contract rates. That should make shippers nervous about the second-quarter spring shipping peak. Credit: Shutterstock.

Shippers may blame the electronic logging device (ELD) mandate for supply chain problems, but the ELD mandate has supply chain issues of its own. The biggest regulatory change for trucking in decades hit a few road bumps after its Dec. 18 rollout. Some of those bumps were expected, but the mandate has had unexpected consequences for shippers and truckers too.

ELD vendors reportedly were swamped by last-minute orders just before the mandate took effect on Dec. 18,  2017. Some carriers have had trouble installing ELDs, and encountered unexpected difficulty training drivers to use them. And for shippers, those problems often translate into trouble finding a truck and shipping delays, and increased pressure for higher rates.

Further, there still are hundreds of thousands of truck drivers who have not purchased an ELD and replaced the paper logs truckers have used to record on- and off-duty hours since the 1930s. All those factors are complicating logistics for shippers, adding to costs and squeezing capacity. And April 1, 2018, the date that full enforcement of the federal mandate begins, is two months away.

Although it is hard to quantify the effect of the mandate and separate it from the effects of winter weather in late December and January and general elevated freight demand, motor carriers, third-party logistics providers, shippers, and ELD vendors say the mandate is playing a role in keeping truck capacity tight. At the end of 2017, national average spot market rates were higher than contract rates. Trucking and rail spot rates can be tracked on JOC.com's Market Data Hub.

That should make shippers nervous about the second-quarter spring shipping peak.

Shippers are seeing, and feeling, a “bullwhip effect” from the mandate, said Kevin Hill, president and founder of CarrierLists, a company that helps freight brokers and shippers source capacity. “That’s when something upstream or downstream in the supply chain, where you don’t have any visibility, hits you,” he said. “People are overpromising and under-delivering” for shippers.

“Forethinking shippers knew this was coming, but there are a lot of people playing catch up right now,” Hill said. Those shippers “need to invest time in making not just their shipping and receiving processes more efficient, but their whole supply chain processes more efficient. Those 500- to 600-mile routes that used to be one day you now have to budget for two days.”

Carriers are experiencing their own unexpected “bullwhip” moments, too. Old Dominion Freight Line (ODFL), the third-largest stand-alone less-than-truckload carrier, had unexpected difficulty integrating new ELD software from its vendor, PeopleNet, into its fleet management and safety software. The carrier has used PeopleNet automatic onboard recording devices (AOBRDs) since 2010.

The ELD mandate “grandfathers” use of AOBRDs for electronic logging until December 2019, but that only applies to devices installed before Dec. 18, 2017. Any vehicles purchased after that deadline must have ELDs that meet the mandate’s technical specifications. PeopleNet has to make changes to software it released on Dec. 15, 2017, before the integration can be complete.

The integration issue meant new trucks ODFL purchased since the mandate took effect wouldn’t have ELDs, as defined by the mandate. ODFL asked for, and won, a 90-day waiver from the mandate’s technical specifications that gives until March 18, 2018, to solve its software problems. The Federal Motor Carrier Safety Administration (FMCSA) waiver covers other PeopleNet customers, too.

“This additional time gives our customers the ability to ensure their ELD data can seamlessly integrate with other back office software,” PeopleNet said in a statement. “These system-to-system integrations include dispatch, fleet maintenance, payroll, and safety software.” Without the waiver, this unexpected wrinkle could have affected first-quarter truck capacity.

The number of trucking industry petitions for exemptions, temporary waivers, and delays ballooned as the mandate approached. In January, the FMCSA granted a request for a 90-day ELD waiver for short-term lessors from the Truck Rental and Leasing Association and a five-year delay sought by the Motion Picture Association of America for film industry drivers.

It is unlikely the FMCSA will grant all these requests and other pending petitions. The ELD mandate has been on the books since December 2015, and carriers have had two years and more to prepare. Many independent drivers and small carriers delayed purchasing or even researching ELDs, however, hoping legal challenges would kill the mandate. They did not.

“The small carriers, people with 20 or fewer trucks, they all procrastinated,” said Ken Evans, CEO of Konexial, a Tennessee-based ELD vendor. “I think they started thinking about [the ELD mandate] over Thanksgiving dinner and called [to order an ELD] around Pearl Harbor Day. Some of our competitors ran out of stock before the mandate hit, and they’re still out of stock.”

Those smaller carriers make up the bulk of active for-hire truck companies. Their large competitors, who provide a steady supply of capacity to high-volume shippers, are mostly compliant, but the small trucking companies that act as a shock absorber in the trucking market when freight demand is high — as it is now — are far from ELD-ready.

“We saw a rush of buying before the December deadline, and now we’re seeing the effect of back orders and lack of training,” Hill said. Since September, CarrierLists has attempted to track trending ELD compliance through a weekly survey. “When we started, only about 20 percent of the fleets we surveyed had ELDs,” he added. On Jan. 29, 2018, the average was 77 percent.

Hill sees smaller to mid-sized regional trucking companies struggling with compliance. “It all depends on where they’re running and what type of business they’re in,” he said. “Regional guys that operate in that 200- to 300-mile range, running that close to home, they can find ways around not having an ELD until maybe April 1. They know where law enforcement is lax or not.”

However, long-haul carriers running up and down the East Coast or across the United States may not be able to avoid law enforcement, and even smaller operators are rushing to get ELDs installed, he said. On top of that, in many states “inspectors are just getting to the point of being trained” on ELD rules. They will not put drivers out of service before April 1, but they are writing tickets.

And April 1 “is just around the corner,” Robert Nathan, CEO of LoadDelivered Logistics, pointed out at the SMC3 2018 JumpStart Conference in Atlanta last week. “I’ve been talking with very knowledgeable executives at Fortune 500 companies who don’t have a solution as to how their supply chains will work in an ELD era,” Nathan said during a workshop on the mandate.

“Fortune 500 companies, whether they believe it or not, depend every day on trucking companies with less than 100 trucks,” Nathan said. Depending on those companies got more difficult after Dec. 18, 2017, he said. “For the first couple of weeks under the mandate, we had a challenge covering loads,” he added. “Weeks later, we’re still seeing capacity problems.”

Konexial’s Evans thinks those problems will continue as small carriers and owner-operators struggle to get ELDs up and running and carriers of all sizes make adjustments to the length of haul and price they are willing to accept from shippers. He expects “the procrastinators of the procrastinators” among truckers to hold out until close to the April 1 enforcement deadline.

“There will be another huge run-up in activity” toward April, he said. “The behavior we saw in November and December will be repeated, and they will not have learned their lesson from December. This won’t be over April 1. This will be going on for the next two years” as trucking companies using grandfathered AOBRDs on older trucks that have to upgrade to ELDs.

The stakes for shippers are high, and not always understood in the CEO’s suite, he said. “A lot of companies treat logistics as an afterthought. They don’t understand the economics,” Evans said. He speaks from experience – Evans spent decades as a logistics director for companies such as Eastman Chemical, Celanese, Koch Industries, and Spirit AeroSystems.

Those shippers that have not been paying attention to the ELD mandate “are the companies being hit now by massive rate increases and they can’t get trucks,” he said. A JOC survey last September found only 29 percent of shippers surveyed had reviewed detention and shipping practices in advance of the mandate, and 20 percent had done nothing to prepare.

“I think shippers are starting to get stung a little,” Nathan said. He is hopeful, however, that sting will lead to changes in shipper behavior. “I wish we could be more collaborative,” he said. “ELDs are like a volcano. We need to ask what we can do to embrace this. Imagine the benefits if we eliminated detention. Drivers waiting two or three hours, that should be a thing of the past.”