Truck drivers left jobs at large truckload carriers at a faster pace in the second quarter, but that pace was still slower than in any second quarter since 2011. Meanwhile, smaller truckload operators are doing a better job holding onto drivers as the U.S. economy expands more slowly.

In the same period a year ago, the turnover rate at large carriers was 96 percent, and at small carriers 94 percent, as back to back quarters of strong economic growth tightened available truck capacity. Lower turnover rates likely reflect slower U.S. growth and higher driver pay. 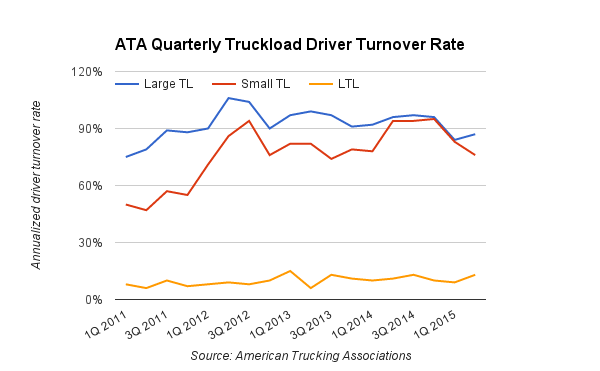 Overall, the ATA data show trucking companies are keeping more of their trucks "seated." Trucking companies redoubled efforts to hire truck drivers and to keep them last year, expanding payroll by 46,000 jobs in 2014, compared with 24,900 in 2013, and raising driver pay by double digit percentages in some cases.

But even those gains haven't erased concerns about what ATA and many trucking companies claim is a growing shortage of qualified drivers.

The uptick in turnover — the percentage of total drivers that must be replaced annually by a fleet operator — follows renewed warnings from ATA about driver shortages. ATA last week said the number of drivers needed but not available will rise to 47,500 by the end of this year.

That’s more than 25 percent increase from the 38,000 driver shortage ATA reported in 2014, and the highest number ever projected by ATA, though those numbers are still lower than those released by research firms such as FTR, which sees a shortage north of 100,000.

Unless some big steps are taken to address the problem, the shortage could reach almost 175,000 by 2024, the ATA said in its analysis.

ATA sees the shortage of qualified drivers worsening this year even as freight demand slows from stronger growth in 2014.

In part, that’s because of a tightening demographic noose that threatens to choke trucking’s driver pool. ATA claims the median age for over-the-road drivers is 49, compared with 42 for the general U.S. workforce, data sourced from an ATA survey and from the U.S. Labor Department.

“With an aging population of current drivers, retirement accounts for 45 percent of future need,” the trucking lobby group said. Future growth in freight demand will account for another 33 percent of truck driver hires, the association said.

The loss of experienced, qualified drivers through retirement underscores that the shortage may increasingly be more about quality than quantity. The ATA and carriers talk about a shortage of “qualified” drivers because there are plenty of people who want to drive a truck but can’t.

“Despite receiving applications for employment, motor carriers are finding few eligible candidates, which is a quality issue,” the ATA said. The issue was raised by speakers who highlighted the need for driver training at the JOC Inland Distribution Conference last week in Memphis.

Trucking companies that receive hundreds of applications for driving jobs a week can only hire dozens of those applicants as drivers, if that many, speakers on a panel about the driver issue said. That’s because their qualifications for truck drivers are becoming more stringent.

Panelists said the demand for accident-free, drug-free drivers with several continuous years of driving experience limits who carriers can hire, unless they run driver training schools. Insurance costs and legal liabilities, as well as regulations, are squeezing the pool of qualified drivers.

The number of truck drivers is certainly increasing. The total number of tractor-trailer or heavy truck drivers employed in the U.S. rose 2.5 percent in 2014, the U.S. Bureau of Labor Statistics’ occupational employment statistics show. That compares with a 1.9 percent gain in 2013, when the U.S. economy expanded more slowly.

QualifiedCarriers.com estimates the number of truck drivers has increased 21 percent since 2012 and 4 percent year-to-date, data CEO Jeffrey Tucker shared at the JOC conference.

Too many drivers are “under-utilized” today, Allen Boyd, a truck driver for Wal-Mart Transportation on the panel, told the JOC conference. “If my wheels don’t turn, I don’t get paid,” Boyd said. “If a driver is sitting at the dock four, five or six hours, that’s taking away time with family,” he said.

And that turns the wheel back to increased driver turnover.

Turnover and the shortage are not the same issue, ATA stressed. “Turnover is a reflection of demand for drivers, with higher rates generally indicating strong demand for drivers,” the association said in its report. “The vast majority of driver turnover is churn in the industry – drivers going from one carrier to another.”

However, the higher the churn, the higher the cost of hiring and the more drivers need to be hired. For a fleet with 300 drivers, an 87 percent turnover rate means hiring 261 drivers a year. In most cases, carriers are constantly replacing a small number of drivers throughout the year, “reseating” the same trucks several times. The cost for a fleet that size can easily run over $1 million.