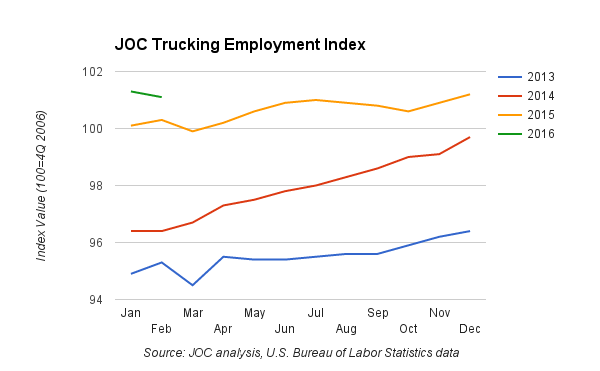 The U.S. economy added jobs in February, but not in trucking. Payrolls at for-hire trucking companies declined last month for the first time since October, shedding approximately 600 jobs, according to the U.S. Bureau of Labor Statistics. That pushed the JOC.com For-Hire Trucking Employment Index down from a reading of 101.3 in January to 101.1 in February.

Trucking employment at the motor carriers surveyed by the BLS was still up 1 percent year-over-year at nearly 1.47 million jobs, according to data released by the Labor Department agency last week. The sequential monthly decline in February may be more a sign of improvement in other sectors of the economy than a decline in demand for trucking.

Overall, the U.S. added 242,000 jobs in February, keeping the national unemployment rate at a post-recession low of 4.9 percent. The February report surpassed expectations the economy would add about 190,000 jobs, reducing fears the U.S. was sliding toward recession.

The big job gains, however, came in service industries such as healthcare and social assistance (57,000 jobs), and food service and drinking places (40,000 jobs). Retailers did add 55,000 jobs, according to the BLS, with food and beverage stores adding 15,000 jobs in February.Those job gains provide a clue as to where consumers are spending gasoline and energy savings.

As the unemployment rate stays low, trucking companies and other transport employers are running into increased competition for workers. Construction companies hired 19,000 workers in February, and residential specialty trade contractors hired 14,000 of those employees.

Payrolls at other transportation industries, including railroads and air, water and warehousing operators also declined in February.

Trucking companies increased driver pay 14 percent on average from mid-2014 through January, according to the National Transportation Institute, but that rate is hard to maintain in a period of softer economic demand. Carriers now are aiming pay raises at drivers with specific qualifications or training or accident-free records. That selective pay strategy is likely to spread in 2016.