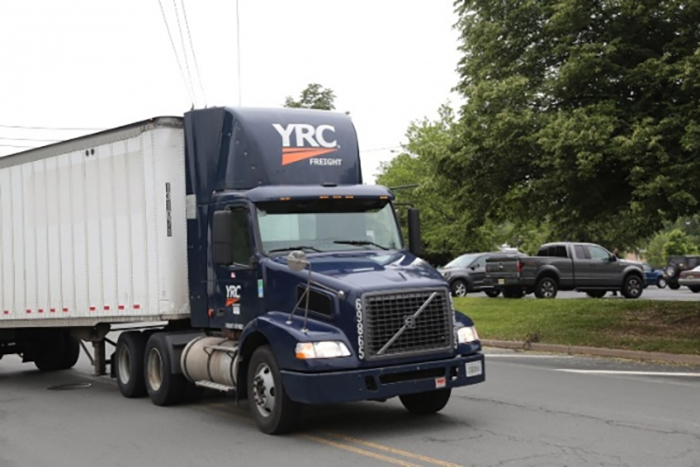 An unexpected diversion of freight to rails in the wake of last year's hurricanes will cost trucking company YRC Freight $1 million, payable to its over-the-road Teamster drivers. The amount of freight diverted to rail and third-party transport operators because of terminal and service interruptions following the storms exceeded limits imposed by YRC Worldwide's contract with the Teamsters union.

“Our YRC members have an agreement that strongly protects bargaining unit work and work opportunities and the company acknowledged that it diverted more freight than what is allowed,” Ernie Soehl, director of the Teamsters National Freight Division, said Thursday in a statement. "We will always seek to hold employers accountable by making sure they abide by our contracts and agreements.

Under its Teamster contract, YRC Freight’s total combined intermodal rail and purchased transportation miles cannot exceed 26 percent of the carrier’s total miles in any given year. A union committee that monitors the contract determined YRC Freight exceeded the maximum number of road miles that could be hauled on rail and ordered the company to pay $1,003,930. YRC Worldwide declined to comment.

Hurricanes Harvey and Irma already had taken a bite from YRC Worldwide's bottom line. The storms hit national less-than-truckload (LTL) carrier YRC Freight and regional subsidiary Holland, which operates in the Midwest and Southeast. All told, 28 terminals were temporarily closed or had limited operations in late August and early September, as Harvey flooded the Gulf Coast and Irma whipped through Florida.

As a result, YRC Worldwide in October lowered its projected operating profit for the year by $50 million to the new range of $100 million to $120 million. The storms also had a "cascading effect" that delayed shipments and reduced productivity over a five-week period, James Welch, CEO of YRC Worldwide, said in October. The company also had to relocate equipment and pay employees overtime during the recovery.

The Teamsters said a review of records made it clear that a substantial amount of the diverted freight, mostly carried on rail, was the direct result of "extraordinary service and terminal interruptions" caused by the hurricanes, and that the company should not be penalized for "acts of God." However, the union still ordered the $1 million payment to truck drivers affected by the diversion of freight.

YRC Freight will contact Teamster local unions to review the list of drivers who are eligible for the payment, the union said. The Teamsters’ five-year agreement with YRC Worldwide, which includes wage and benefit concessions made to help the company avoid bankruptcy during the 2009 recession, restructure, and return to profitability during the economic recovery, expires in 2019.

ABF Freight, the LTL subsidiary of Arcbest, began negotiations on a new five-year Teamster agreement next week. Its agreement with the union expires March 31 this year.