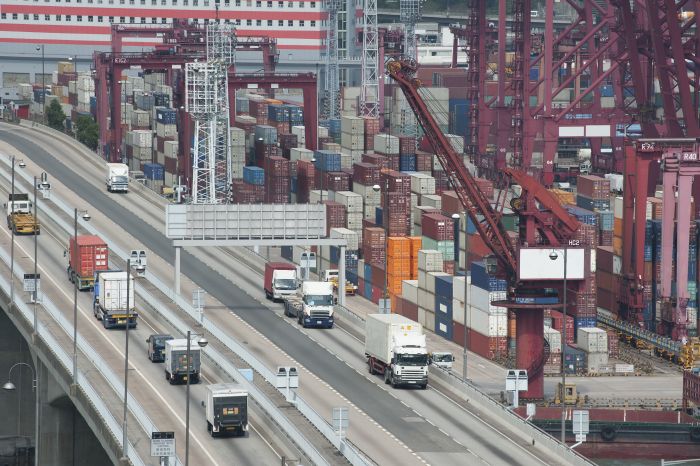 HONG KONG — A combination of manufacturing migrating from China to its Southeast Asian neighbours and improving road infrastructure is set to grow cross-border trade, despite the import and export of containers taking up to three weeks in some countries.

According to World Bank data sourced by Citi Research on the “ease of trading across borders”, it takes 21 days to export containers from China and Vietnam, and 14 days from Thailand. Time to import in China was 24 days, 21 days in Vietnam and 13 days in Thailand.

Hong Kong and Singapore ranked at the top of the ease of trading table, with Thailand at number 20, China at 68 and Vietnam at 74.

The World Bank table looks at time and cost necessary to complete four predefined stages — document preparation; customs clearance and inspections; inland transport and handling; and port and terminal handling — in the exporting and importing of goods.

Yet trade across the land borders of countries in Southeast Asia is growing regardless, supported by a rapidly developing road network that stretches from Singapore on the southern tip of the Malay Peninsula to Shanghai, more than 4,000 miles.

Several players now provide comprehensive connections that cover most countries in the region.

“While KLN’s cross-border road freight business is still relatively immature in our view, the company continues to expand its network and improve shipment density,” Citi Research said in a note to customers.

Kerry recently introduced two new routes, Bangkok-Yangon and Shanghai-Kunming-Mandalay-Yangon, and Citi believes this gives it the potential to add significant volume in 2015.

Covering the Singapore-Shanghai route and connecting all the countries in between is Nippon Express using its overland truck transport system. Citi Research said in its report that Japanese manufacturers in the region comprise around 70 percent of Nippon Express customers.

The ASEAN and South Asia region is rapidly developing into a mega market, but it is crucial a regional supply chain is established to support such growth, Nippon Express said in a statement.

“As the economic partnerships of each country strengthen, trade within the region is on the rise and the establishment of transport routes is moving at a high pace,” the Japanese logistics provider said.

In recent years, transport volume on the key portion of Singapore-Shanghai route (SS7000 network) between Thailand and Malaysia has been rising, with demand ramping up as consumption in the region soars. To meet the growing demand, Nippon Express in December last year launched an international rail transport service between Bangkok and Kuala Lumpur to supplement the SS7000 network.

“While cost and lead time are on par with truck transport on the route, transport capacity is significantly higher — one of our dedicated trains can transport 27 high-volume cars. Regular runs, transporting mainly automotive parts, have begun, and we plan to gradually increase the number of runs to further enhance service,” Nippon Express said in its annual report.