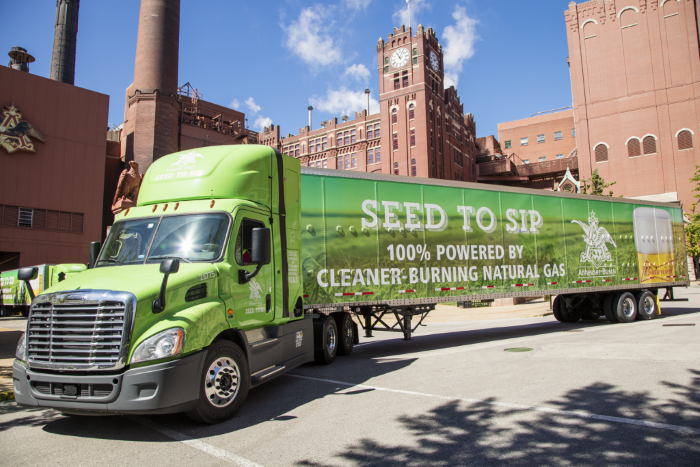 Purity and quality are prime concerns for Anheuser-Busch, not just in terms of its products but its supply chain as well. The producer of Budweiser, Michelob, and Stella Artois, among other beers, is fine-tuning transportation and logistics operations to cut carbon emissions from brewery to distributor to store — from first mile to final mile and all steps in between.

RNG is interchangeable with CNG, and the RNG-fueled trucks will be even cleaner burning than the CNG vehicles, Angie Slaughter, vice president of sustainability, logistics, supplier value creation, and capabilities procurement at Anheuser-Busch, said in an interview. “We’re doing a number of things to reduce emissions, but the big game-changer is the move to alternative fuels,” she said.

Eventually, Anheuser-Busch plans to have a 100 percent clean emissions dedicated fleet in North America, with electric-power trucks from manufacturers such as Nikola Motor Tesla, and BYD (Build Your Dream), as well as the RNG-powered vehicles. The brewer placed an order for 800 hydrogen-electric Nikola trucks in 2018, and has ordered 40 electric trucks from Tesla.

The long-term goal is to reduce emissions from logistics operations by 25 percent by 2025.

“Logistics accounts for 9 percent of our greenhouse gas emissions,” Slaughter said. “To reduce that by 25 percent between now and 2025, we’ll not only have to change our own operations but incentivize our trucking suppliers to reduce emissions, or we won’t meet that goal.”

That’s a sign of how entrenched and how important sustainability has become within corporations such as Anheuser-Busch, part of $52 billion global beverage company AB InBev. Ten years ago, businesses were focused mostly on internal changes they could make to reduce emissions. Now they have to collaborate with partners in complex networks to meet their goals.

“Before we set our 2025 goals in 2018, many of our goals were inward-facing,” Slaughter said. “We were potentially able to meet those goals by our own actions.” But the US 2025 sustainability goals raised the bar considerably, setting fresh targets for renewable energy and carbon reduction, water stewardship, smart agriculture, and recyclable packaging.

“All four of those areas reach into our supply chain,” Slaughter said. “We will not be able to meet those goals without transforming those supply chains. That’s the difference between then and now. We’re responsible for our entire value chain, not just our internal company.” That means transportation and logistics providers and other suppliers will have to make changes, too.

Anheuser-Busch already tracks its trucking providers’ emissions closely, she said. “We’ve been part of the EPA [US Environmental Protection Agency] Smartway program,” a program established to reduce emissions, “since 2006. About 90 percent of the volume we give to motor carriers is handled by Smartway carriers. There’s a lot of cooperation between us.”

Anheuser-Busch operates 12 breweries in the United States and distributes to wholesalers from each one. That “tier one” service handles 800,000 shipments a year, Slaughter said. About 40 percent of those loads are handled by the wholly owned dedicated fleet, and 60 by contract carriers and third parties, she said, although the brewer is narrowing that divide.

The dedicated fleet typically delivers to wholesalers within 200 miles of the brewery, while contract truckload carriers would handle longer hauls. Anheuser-Busch owns about 25 out of more than 1,400 distributors and wholesalers, and also owns delivery trucks — typically smaller straight trucks and vans — at those facilities for final delivery to the retail outlet.

The 180 RNG-powered trucks will operate from breweries in Houston and St. Louis, hauling beer to wholesalers as part of the “tier one” service. Altogether, the RNG trucks will represent 30 percent of Anheuser-Busch’s dedicated fleet of company-owned equipment. “RNG is readily available, so if you can move to a renewable fuel it makes sense,” Slaughter said.

While CNG as a fuel ultimately originates in the oil and gas drilling process, RNG is a transportation fuel derived from organic waste that has been processed to meet purity standards, removing water, carbon dioxide, hydrogen sulfide, and other trace elements. The result is a “pipeline quality” transportation fuel that can be used in lieu of CNG.

Incentives provided by manufacturers under the US renewable fuels program help make the transition to RNG economical, Slaughter said. “When we compare the cost to other fuels, we look at the total lifecycle cost of the vehicle,” not just at the ticket price on the tractor and fueling system, she said. “When we look at the total lifecycle cost it makes sense to move to RNG.”

The shift to RNG and the purchase of 180 new tractors is only the tip of the iceberg for Slaughter and others working on the company’s sustainability goals. In transportation alone, Anheuser-Busch is also looking at the use of electric trucks, from smaller vehicles to Class 8 tractors, especially in its “tier two” service from wholesalers to distributors and retailers.

Last October, Anheuser-Busch deployed 21 battery-powered Class 8 trucks manufactured by BYD (Build Your Dreams) at four company-owned distribution centers in California. That project is underwritten by the California Air Resources Board (CARB) and involves a partnership with the Center for Transportation and the Environment and energy provider ENGIE Services U.S.

Sustainability won’t be delivered by RNG or electric tractors alone. “Base-line efficiencies,” such as reduced empty miles on backhauls, and greater visibility in the supply chain, not only generate transportation savings but can reduce overall emissions, Slaughter said. The shipper sees its work with technology firms such as Convoy as contributing to sustainability.

“Convoy is one of our partners, but we have 10 to 12 key strategic partners” in the transportation technology field, she said. “We’re working toward becoming more efficient and more predictive. That complements everything we do on the fleet side. I don’t think there is any one solution. I think we’ll have a portfolio of solutions in our transportation space.”