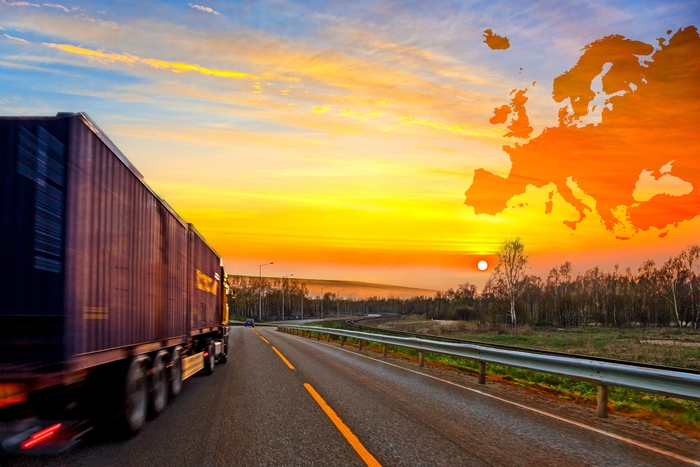 Volatility in Europe's trucking markets is expected as the pace of recovery varies across the continent. Photo credit: Shutterstock.com.

But a phased re-opening of sections of the European economy began at the end of April, and with different sectors starting production at different times in different countries, road freight rates are facing increasing volatility in the months ahead, according to the European Road Freight Rate Benchmark Q1 2020 report. The report was released this week and compiled by Transport Intelligence and trucking rate marketplace Upply.

“If there is a sharp recovery in demand and capacity can’t come back online, rates will increase,” Andy Ralls, quantitative analyst at Transport Intelligence, said during a webinar on the report this week. “But it will be lumpy as sectors come back online at different stages and capacity won’t always be able to react to that.”

Faced with significant changes in both demand and their cargo mix, European hauliers were quick to cut capacity from the market, which caused particular shocks on lanes open to cross-border trade. Border controls designed to cut passenger transport had an adverse effect on road freight operations throughout the continent and led briefly to lengthy traffic jams at several crossings.

The marginal drop in rates came as “a bit of a surprise” considering how the coronavirus affected market demand, said Ralls. “But there are some things to bear in mind,” he added. “Lockdowns and restrictions on everyday lives have been going on since March, so the first two months of the first quarter were largely shielded from the effects of the coronavirus, and there was stockpiling to factor in.”

The situation on the ground changed drastically toward the end of the first quarter when demand for road freight across Europe began to slow, but there were sector-by-sector variations, the report found.

Production in the automotive sector largely came to a standstill in mid-March, eradicating significant road freight volume of parts and other products related to the sector, and the fashion-retail and industrial sectors shut down. There were huge spikes in demand for grocery-related transport in March as a result of panic-buying, which later subsided, while chemical and pharmaceutical production continues to see sustained high-demand levels.

“We do have high fluctuations in some corridors where in specific industries, especially in the food industry, and pharmaceuticals, where we have very high demand and limited capacity,” said Thomas Larrieu, chief data analyst at Upply.

One of Europe’s largest trucking markets is France, and data from Upply shows road freight activity in the country was down 40 percent at the end of the first quarter compared with early January. However, instead of rates collapsing because of a surplus in supply, many operators elected to take capacity out of the market rather than operate at a loss, or went out of business altogether.

Some lanes did report strong increases in rates, such as Paris to Warsaw, with higher demand momentum, border congestion, and cost increases playing a part. The front-haul quarterly rates were up 7.5 percent year over year, which was the highest growth reported across the 34 trucking lanes covered by the Transport Intelligence-Upply report.

The big question facing the road freight business now is how quickly demand will return to the market. “As many small carriers closed their businesses in the past weeks, we need to carefully follow the balance between capacity and demand to foresee the likely rates increase,” Larrieu said.