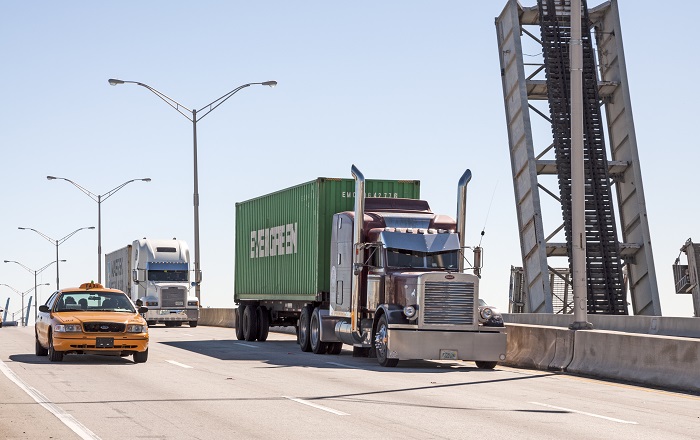 An early peak could snap up US truck capacity and bring more pressure to pricing. Photo credit: Shutterstock.com.

An accelerated peak shipping season at sea could translate to an earlier than usual surge in truck and intermodal shipments moving off US coasts to distribution centers and end customers this fall. US importers could face tough, and costly, decisions about how to move that freight inland. An early peak could snap up truck capacity and bring more pressure to pricing.

Ocean carriers and US importers are already in “the peak of the peak” in the eastbound Pacific, as Kevin Krause, vice president of ocean services at Seko Transportation, said last week. Ships are being overbooked as US importers seek to bring holiday season merchandise into the country before even stiffer Trump administration tariffs against China take effect.

US imports as a whole rose 8.7 percent year over year in July, compared with an expansion of 6.1 percent in 2017, according to PIERS, a sister product of JOC.com within IHS Markit. Global Port Tracker looked at a selection of eight US ports and projects that July’s containerized imports, which are not yet tabulated, will set a new record and August imports will set another record. What’s more, YTD growth is 5.1 percent, compared with 6.2 percent in 2017, but the July 2018 data is an acceleration amid that YTD slowdown — suggesting that there has been “a late rush” — one in which tariff concerns may have played a role.

Routes inland for those goods will be constrained by tight capacity on road and rail. Drayage and truckload carriers have said they are already near full utilization, with FTR Transportation Intelligence putting truck utilization at 98 percent. As early as May, Union Pacific Railroad said it was booked up with intermodal contractsout of Southern California for the rest of the year.

Intermodal spot rates from LA have rocketed, with the LA-to-Chicago weekly average rate jumping 128 percent year over year to $4,720 in the week ending Aug. 6, according to InTek Freight & Logistics. The LA-to-Dallas rate jumped 133 percent to $5,275. Week to week the LA to Chicago spot rate shot up 48 percent, while the rate to Dallas climbed 16 percent.

Overall, domestic intermodal spot rates were up 47 percent from a year ago on July 30 and 6.9 percent from the prior week. “The jump in the week-over-week rates is a result of constrained market surcharges added to already record-high spot rates in key markets,” Rick LaGore, InTek CEO, said Aug. 8. The availability of containers, chassis, and drivers all constrain intermodal.

With intermodal options narrowing, the wave of containerized freight will spill over into truck markets and could raise spot market rates that have been dropping since early July. The weekly average dry van spot truckload rate tracked by DAT Solutions dropped from $2.45 per mile on July 7 to $2.18 per mile on Aug. 11, but still remains 21 percent higher than a year ago.

“We’re in sort of a lull right now,” Peggy Dorf, DAT market analyst, said. “It’s not as much of a lull as you usually get in August.” Capacity remains tight in distinct regions across the South and on both coasts. The LA market is the highest-priced spot market for dry van truckloads in the United States. The average dry van spot rate out of LA last week dropped 9 cents to $2.71 per mile.

Although it’s early to draw conclusions from spot market traffic trends in LA, DAT has seen a significant increase in the number of loads moving between LA and Phoenix in the past three to four weeks. That number “is up in the 20 to 30 percent range since early July,” Dorf said. That could be a sign of tightening warehouse space in LA or high competing produce demand.

2018 could be a year of multiple truck peaks

The trans-Pacific wave of imports may break early this year, but that doesn’t mean trucking won’t see more than one peak through the year-end holidays. Contractual truck movements following the surge in imports typically peak in October, but the peak for the spot truck market last year ran into January, Dorf said. That late freight is associated with e-commerce.

“Port traffic is not the only determinant” in the timing of peak trucking, she said. “You get late-season demand, and consumers today are much more last-minute. Importers may still bring stuff in late even if there’s a penalty. We can expect a strong peak because consumer sentiment is good, people have more money, [and] there’s going to be a corresponding uptick in all retail.”