US drayage rates rise as length of haul shrinks

US drayage rates rise as length of haul shrinks 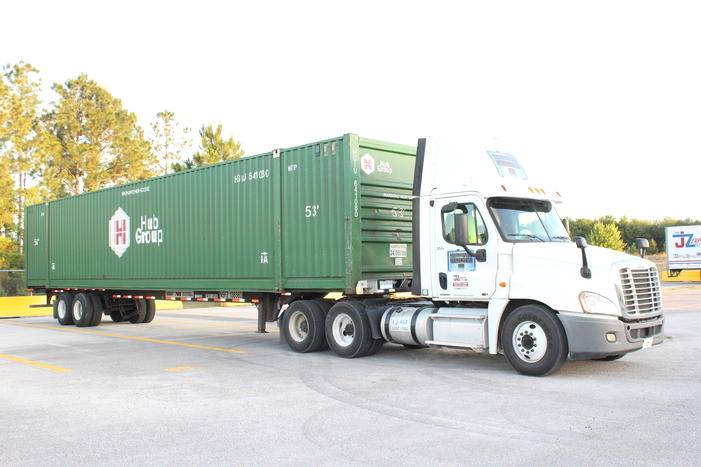 Although domestic drayage rates continue to climb off of record highs in 2018, shippers are not moving containers as many miles, so their overall expenses have fallen nearly 20 percent this year, according to DrayNow. Photo credit: JZ Expedited Companies.

Drayage expenses have fallen nearly 20 percent this year, according to one digital drayage load board, as shippers book shorter hauls to cut down on what’s often the most expensive part of a container move on a per-mile basis.

Average haul lengths in truckload have been falling for more than five years as shippers develop a regional distribution center network. Inland ports have popped up for the same reason in Georgia, South Carolina, and Virginia: shorter drays from an inland hub.

Hauls of more than 150 miles must be digitally tracked with an electronic-logging device, so exempt shorter trips are more attractive. Drivers also prefer shorter hauls because they often get paid per job. Then there is concern over highway congestion, infrastructure, and the environment, which port authorities cite to promote rail and inland port projects to take traffic off the roadway.

Mike Albert, CEO of domestic drayage digital load board DrayNow, says the average length of haul is down more than 25 percent this year, according to his data. Rates have increased about 15 percent on a per-mile basis, he said, but the drop in miles per dray means shippers are paying less in final invoices than a year ago. Drayage companies raised rates multiple times last year, but base and per-mile rates normally remain constant for six to 12 months, leaving the fuel surcharge as the primary variable.

He said this is true for other major urban centers too, such as Los Angeles, where shippers open cross docks to quickly unpack, re-sort, stage, and re-ship cargo to end users.

“In these highly dense markets, all your moves will be really short. So, there is a real need for these shorter moves to where your customers are located,” Albert told JOC.com.

Inland ports in Chatsworth, Georgia, and Dillon, South Carolina, have opened since 2018 to provide beneficial cargo owners (BCOs) an alternative to bring containers close to their distribution centers via rail, substituting a long regional dray with a shorter one at a facility with quick turn times. The Richmond Marine Terminal in Virginia has caught on with grocers Aldi and Lidl and retailer Lumber Liquidators, among others, using a barge service operating six days per week. E-commerce giant Amazon.com recently announced a new distribution center will be built in Richmond.

The Georgia Ports Authority also championed shorter hauls as part of its announcement to build an inland port in Gainesville, Georgia. A round trip to this city from Savannah is seven hours, whereas the average from this inland port will be 30 minutes, according to the Greater Hall Chamber of Commerce.

Jim Newsome, CEO of the South Carolina Ports Authority, said he remembers the days when BCOs would routinely run containers to the West Coast and then put them on rail to major East Coast cities. But because ocean and rail rates are cheaper on a per-mile basis than drayage, in general, many BCOs would rather spend as little money as possible on the trucking. It’s a longer transit time, but if time were critical, then a BCO would likely pay to use air freight rather than a container ship.

“Probably 65 to 70 percent of the international intermodal freight ending on the East Coast arrives on the East Coast, rather than moving from the West Coast across the country on a land bridge. There is increasing popularity in short-haul rail,” Newsome said.

Shorter truck trips are also behind the push to build Mexico-to-Florida routes, a rail route from Miami to Titusville through Florida East Coast Railway, and Port Tampa Bay’s effort to win more Asian business. The first can avoid a costly over-the-road cross border haul, while the other two are alternatives to regional drayage or over-the-road trips from Savannah to the Interstate 4 corridor in Florida.