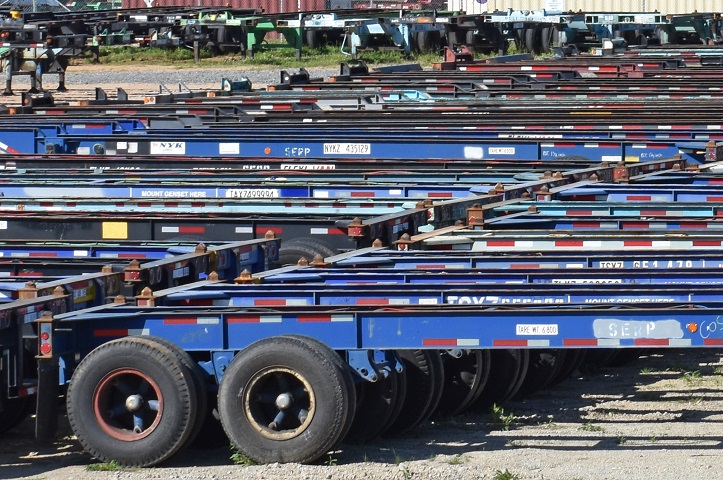 There are ports on the US East Coast without enough chassis to handle the concentrated bursts of cargo on post-Panamax vessels in peak season. Photo credit: Shutterstock.com.

Even with more and new US chassis entering the market to meet demand, it’s becoming clear to shippers and truckers that it’s going to take more than money to move forward from costly and energy-sapping dislocation.

In 2018, the alarm was sounded. In 2019, port authorities, truckers, chassis providers, and ocean carriers will have to roll up their sleeves to find universally acceptable solutions that will benefit cargo owners. Marine terminals are ground zero in the chassis shortage. It’s the first interaction between a container and truck. If this low-tech piece of equipment is unavailable, then nothing moves and supply chains grind to a halt.

There are ports on the US East Coast without enough chassis to handle the concentrated bursts of cargo on post-Panamax vessels in peak season. The ports of Charleston and Savannah will push an outside-the-box idea to solve these challenges. South Carolina Ports Authority and Georgia Ports Authority want to reinvent chassis operations and are planning to launch the Southern States Chassis Pool, supporting an “at-cost” model run by the North American Chassis Pool Cooperative (NACPC).

It would exchange the low rates on carrier haulage and high rates on merchant haulage with a single rate in the middle on all cargo. The launch date of Southern States — originally Jan. 1, 2019 — has been delayed because carriers and equipment providers worry about the impact on existing contracts with cargo owners and overall profits.

“Ocean carriers have made a variety of commitments to their customers, and their arrangements with chassis suppliers are the basis for many of these commitments. Disrupting those arrangements in the middle of a contract would be very problematic for many of the carriers,” said Jeff Lawrence, executive director of the Ocean Carrier Equipment Management Association (OCEMA).

Port officials in Georgia and South Carolina remain confident that a solution can be struck to resolve equipment shortages while also satisfying the financial concerns of ocean carriers and chassis providers. If an agreement is reached, it could be a roadmap for other inland markets to address their chassis shortages. There are also efforts under way to pump new equipment into the Hampton Road Chassis Pool II. The Virginia Port Authority (VPA) added 1,000 new chassis in November 2018 to bring the fleet size to more than 18,000. The port will expand the pool in 2019, although the exact amount has not been determined.

“As we look at our volume growth projections in fiscal 2019 and fiscal 2020, we will analyze the behavior of our motor carrier community. Are they are sitting on a chassis longer or returning it sooner? We will determine the fluidity of the equipment and make the appropriate adjustments,” said Shawn Tibbetts, chief operating officer of the VPA. “It’s not as simple as TEU will grow by 5 percent, so our chassis pool has to grow by 5 percent.”

Chassis — one piece of the puzzle

Chassis are one piece of the puzzle, which also includes new cranes, larger container yards, and dredging, but all the parts must fit together in sync for the supply chain to remain smooth in the future. This object consisting of steel, rubber, wiring, and lights seems so simple, but containers will never reach a cargo owner without one. And if no chassis is available, there’s no way for a truck to get a container from a terminal to the warehouse.

The inland is by no means spared of the same challenges. As port authorities in Virginia, South Carolina, and Georgia build out their rail capabilities, more freight is converging in Chicago, Atlanta, Dallas, and Memphis.

It’s the final location where active discussions between truckers, cargo owners, and ocean carriers will continue into 2019. Trucking companies are frustrated with chassis splits, which require an extra stop that often wastes minutes, if not hours, of on-duty hours and robs drivers of productivity, which ultimately means less income.

A coalition of shippers and truckers is negotiating with ocean carriers about an interoperable pool. Negotiations with OCEMA will involve similar issues as Charleston and Savannah.

Tariffs have boosted unit costs, and may again

In the background is tariffs, which already have increased prices by $1,000 per chassis. If a trade deal cannot be reached, a 25 percent tariff would cause costs to rise by $3,000 this spring. China International Marine Containers (CIMC) is the largest supplier of chassis in the world.

Because of tariffs, NACPC has chosen to refurbish chassis this year rather than buying new equipment. In prior years, NACPC purchased thousands of new CIMC chassis annually.

“We will only buy new chassis if there is enough demand and our refurbishment program is not adequate, but that would be a worst-case scenario. This is a big change for us,” said Dave Manning, executive chairman of NACPC.

Cheetah Chassis and Hyundai Translead believe they can double their domestic output, but chassis providers don’t think it will be nearly enough. Prices on these domestically manufactured chassis are also rapidly rising, according to Manning. He said because of steel tariffs, a US-built chassis is 20 percent more expensive than a year ago.

Milestone Equipment Holdings will continue to buy new chassis in 2019, but rates will increase as the company attempts to recoup its costs. Higher prices eventually trickle down to cargo owners on their invoices.

“We already raised rates in July and August on September chassis deliveries because of the first round of tariffs. There was very little pushback on that, but there will definitely be pushback when the rates go up again [if tariffs rise to 25 percent],” said Doug Hoehn, executive vice president of Milestone.

It will be interesting to see how the pendulum swings between refurbishment and new orders for TRAC Intermodal, Direct ChassisLink Inc., and Flexi-Van Leasing.

If the balance shifts toward refurbishments, will those business decisions improve terminal fluidity, degrade it, or maintain the status quo? And is refurbishment a Band-Aid on the problem? Stay tuned.