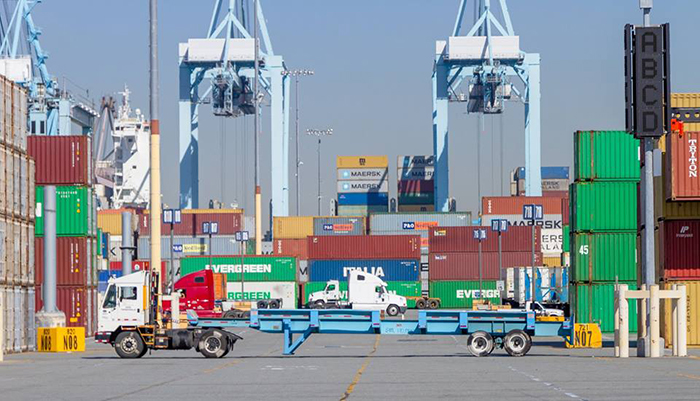 GeoStamp allows users to track developments and wait times inside and outside container terminals.

Drayage companies in Los Angeles-Long Beach are using a mobile app that allows them to manage truck dispatching and avoid trouble spots in a real-time environment, holding out the promise that congestion flare-ups in the largest U.S. port complex may some day be a thing of the past.

The GeoStamp product is also catching on with beneficial cargo owners and marine terminal operators who are gathering historical data that helps them correct bottlenecks and work with vendors in their port-related supply chain.

“Metrics are good,” said Weston LaBar, executive director of the Harbor Trucking Association, which has worked with InfoMagnus to develop and expand the GeoStamp software product. “Metrics are good for the industry as a whole,” he said.

A half-dozen harbor trucking companies in Southern California are using GeoStamp to provide real-time information on marine terminal operating conditions, and to aggregate weekly and monthly data that they use to analyze recurring conditions in the harbor area in order to correct problems that contribute to congestion. There is growing interest among BCOs and terminal operators to use the same data to improve container delivery and truck turn times, LaBar said.

GeoStamp enables users to geofence an area and capture real-time data within that area. A trucking company dispatcher can geofence an entire marine terminal, or can break it down into segments such as the truck queue outside the gate, the in-gate, the chassis pit, the trouble window, the roadability-inspection site for chassis and the outgate. The trucking company can go even further and geofence a major freeway feeding the port or a distribution warehouse where the containers are delivered.

InfoMagnus has been developing the GeoStamp mobile app over the past year, and will continue to expand its capabilities, said Sal Manzo, co-founder of the company. He sees the application catching on beyond Los Angeles-Long Beach. Some Southern California truckers with operations in Oakland are using GeoStamp. LaBar said he will join InfoMagnus in September to meet with the Port of Houston. He anticipates that other operating ports may want to investigate the product, as well as harbor trucking associations in other ports.

Now that much of the heavy-lifting has been completed and the product is being rolled out in Los Angeles-Long Beach, implementing GeoStamp in other port regions should be accomplished with a shorter timeline, Manzo said. A trucking company interested only in the mobile app can be set up in an hour. Setting up a more comprehensive system can take up to two weeks.

Sherry Hertel, sales manager at Southern Counties Express, said the drayage company uses GeoStamp each day to monitor the terminals where its trucks call. The information is refreshed about every five minutes, so if a queue is developing at the gate, or a section of a terminal is suddenly shut off to trucks, or the chassis pit runs out of equipment, Southern Counties can respond immediately.

George Boyle, president and CEO of Quick Pick Express, said he uses the real-time data on marine terminal conditions to optimize the driver fleet each day. He uses the historical data to uncover recurring issues at marine terminals. “We’re able to look at events in real time, or back in time,” he said. For example, a particular terminal may have unreasonable delays at the inspection location where longshoremen determine the roadability of a chassis. Sometimes a driver may struggle with a certain process, and the company can help the driver overcome the problem.

Users can tailor their use of GeoStamp in any number of ways. “What you want to show, you can show,” Manzo said. A trucking company that calls regularly at one of the 13 container terminals in Los Angeles-Long Beach can aggregate and analyze truck times based on location within the terminal, time of day, day of the week or after holidays in order to plan dispatching, he said.

The HTA since 2013 has been publishing monthly reports on truck turn times at each of the container terminals. Terminal operators often complain that the HTA’s method of starting the clock when the truck arrives at the queue outside the gate and turning it off at the exit gate does not give a true picture of turn times because some truckers arrive an hour or so before the gates open in order to be processed quickly.

LaBar said that with GeoStamp, the trucking association is measuring and recording each step along the way, so that if a trucker arrives at 7 a.m. for an 8 a.m. gate, the hour wait is not included in the total truck visit time. HTA is working with the terminals and PierPass to generate data that both parties will accept, he said.

He said terminal operators are also finding value in the data. “In the presentations we made to the terminals, they like it,” he said. If the data shows a particular problem, such as excessive delays for the roadability inspections or at the chassis pits due to a shortage of equipment, terminals are using the information to improve their operations, LaBar said.

Yusen Terminals in Los Angeles is considering subscribing to GeoStamp. Alan McCorkle, the vice president, said he was impressed by the scope of data that was available in the live demonstration he viewed, although he also detected some erroneous data. “If they make the changes we asked for, and depending upon how much they charge, we intend to use it,” he said.

Although Yusen captures certain information with its own internal system, GeoStamp’s live dashboard that zeros in on different areas of the facility such as the gate, the transtainer run, the roadability and the chassis operations displays data Yusen’s system does not provide, McCorkle said.

Hertel noted that some of her larger BCO customers say they find value in the historical data that GeoStamp provides in order to track the performance of marine terminals that handle their shipments. If the BCOs detect recurring problems, they can go right to the terminal operator for corrective action.

Now that larger vessels are able to transit the expanded Panama Canal and call at East and Gulf Coast ports, LaBar said HTA is receiving inquiries from ports or truckers in those regions to learn more about GeoStamp. When the port authority operates the port, it usually initiates the inquiry and offers to act as facilitator for the harbor community. At landlord ports, the local trucking association will usually initiate the communication, he said.

Global Shipping Outlook: A Sneak Peek at 2021
Port Performance North America: Managing Cargo Flow During a Pandemic — and Beyond
END_OF_DOCUMENT_TOKEN_TO_BE_REPLACED