RoadOne expands in US Midwest to meet drayage demand

RoadOne expands in US Midwest to meet drayage demand 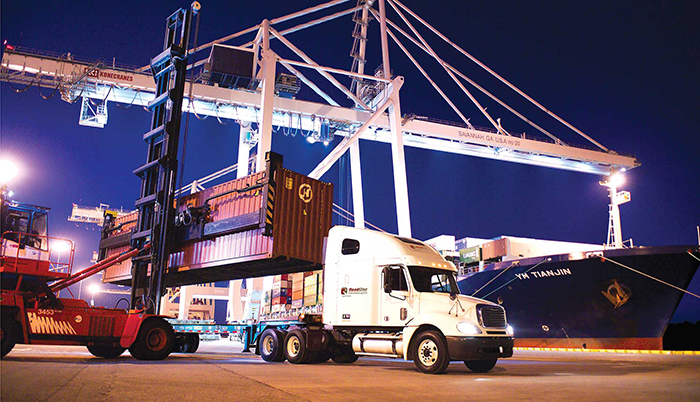 Drayage networks used to move containerized goods from ports to rail ramps to distribution centers (DCs) are being redrawn across the United States, as transloading increases at US ports and the electronic logging mandate looms for truck drivers, including drayage operators.

For one, the acquisition will give RoadOne more capacity at Chicago’s rail intermodal ramps as well as inroads into expedited air freight arriving at O’Hare International Airport. The company operates more than 150 trucks and has a warehouse and four container yards in Illinois.

“They bring us into new sectors,” Kellaway said. “UGL hauls a lot of time-sensitive automotive products, and deals with a lot of freight brokers that need time-controlled delivery. It’s more than standard container drayage work. They bring us expertise in new areas and new customers.”

Jerry Chey, UGL's owner and president, will continue to run the UGL business as an independent division within RoadOne IntermodaLogistics. Terms of the transaction were not disclosed.

The acquisition comes as intermodal business in the Chicago area is booming. “The peak season is really kicking in with the drayage side, with the big carriers,” Jason Hilsenbeck, president of Drayage.com and Loadmatch.com, Chicago-based online drayage industry services.

“The really big drayage companies are booked up days ahead of time,” Hilsenbeck said. “The small guys are looking for work.”

UGL also gives RoadOne a longer reach beyond Chicago into neighboring midwestern markets. RoadOne will integrate the Boomerang division of UGL, based in Dayton, Ohio, into its portfolio of companies. Boomerang serves the regional drayage markets in Ohio and Kentucky.

Being able to serve local markets and having greater lane density is becoming more important for drayage carriers and other trucking companies as e-commerce changes distribution patterns and the Dec. 18 rollout of the US electronic logging mandate approaches, Kellaway said.

RoadOne already uses electronic logging devices (ELDs) , and does not expect much of an impact from the mandate. But Kellaway does expect disruption among other drayage networks. “We’re seeing length of haul shrink as people convert to ELDs and drivers run out of hours,” he said.

As a result, many drayage operators will have to rethink how they move containers longer distances. “There will have to be more pre-pulling of loads off ramps and staging them for linehaul drivers,” he said. “That requires two drivers, more touches, and more costs.”

RoadOne will use UGL’s Dayton facility as a staging point for intermodal relays, he said. “We have drivers domiciled there to take the handoffs.” The company pursued a similar strategy last year in the Northeast, acquiring C & V Trucking in Connecticut to build density in New England.

“We are going to see freight realignment as people open more [DCs],” he said. And as transloading at coastal ports increases the use of domestic 53-foot containers moving inland, “you’ve got to be better at reloading to fill the backhaul lane. There’s a strategy to it.”

RoadOne is seeing “more and more transloading off the West Coast, and we want to accommodate that growth coming into the Midwest,” Kellaway said. The biggest challenge in any market, he said, is attracting drivers. “There are growth markets where we need to expand, and the Midwest is one of them.”