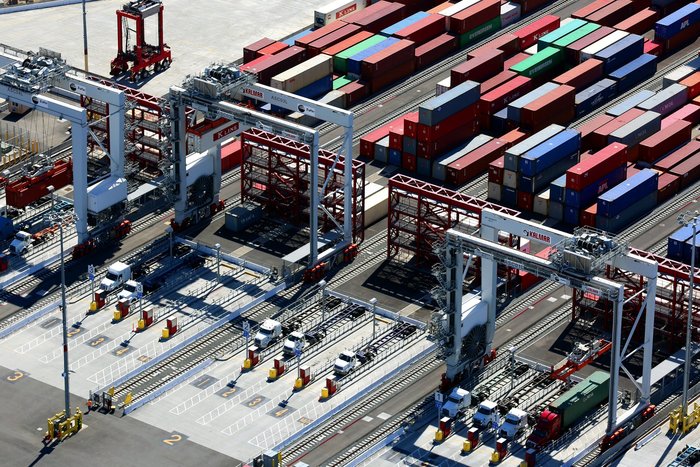 It has been taking trucks longer to move through the ports of Los Angeles and Long Beach.

Truckers in Los Angeles-Long Beach are bracing for tougher times ahead as turn times during the slack winter and spring months suddenly deteriorated by 7 percent in July to an average of 90 minutes with the onset of the peak shipping season.

“It’s a sign of things to come,” said Weston LaBar, executive director of the Harbor Trucking Association. LaBar expects terminal operators in the largest US port complex will experience gate congestion and equipment issues through October as peak-season volumes grow, chassis dislocations become more pronounced, and those terminals that got a surge of new business following the April 1 restructuring of the global carrier alliances struggle to handle increased container volumes.

The HTA each month records truck visit times at each of the 13 container terminals, calculating turn times individually at the terminals and averaging the times for the entire harbor. The data is collected via GPS on member companies’ trucks, and visit times are calculated from the arrival of the truck at the queue outside the gate to the truck’s exit after the transaction has been completed.

While the HTA’s goal is for the terminals to turn trucks in an hour or less, the reality is that visit times during the slower months are in the low-to-mid 80s, and then turn times increase during the peak season in the late summer and fall. That pattern is being repeated this year, with the average visit time in the harbor jumping from the mid-80s in recent months to 90 minutes in July.

Part of the problem this year is that the global vessel-sharing alliances restructured themselves with an April 1 shotgun start. The full impact of the shuffling of the lines hit the port complex in May, with some terminals experiencing a surge in business while other terminals lost business. The terminals that significantly increased their business experienced congestion and gate times deteriorated. Total Terminals International, for example, picked up a new 2M alliance service with calls by ships with capacities of 13,000 20-foot equivalent unit containers. TTI’s average truck-visit time jumped from 87 minutes before the alliance restructuring to 139 minutes in May to 114 minutes in June and 122 minutes in July.

Overall, six of the terminals in July experienced a seasonal increase in average truck visit times of six minutes or greater, which LaBar attributed to growing cargo volumes. The July port numbers are not out yet, but container volumes in Los Angeles-Long Beach through June were up 5.2 percent, with imports 5.1 percent higher than in the first half of 2016, according to statistical information published on the website of the Pacific Maritime Association.

The handling process for containerized imports is more complex than for export loads and empty containers, said Ed DeNike, chief operating officer at SSA Marine, which operates three terminals in Long Beach. Therefore, gate times usually increase during the peak season when holiday season merchandise is shipped. Transportation patterns in the harbor also change. DeNike said that the PCT terminal has been experiencing truck bunching in mid-morning, which he said could be due to drivers working later than usual during the second shift at night, and therefore starting later the next morning.

LaBar said the beginning of what could be chassis shortages and dislocations is surfacing, a condition that could persist throughout the peak season. Imported containers are sitting longer at local distribution centers, and since each container is on a chassis, the longer dwell times outside of the harbor mean fewer chassis are available at the terminals for import containers. HTA members are also beginning to report that they are getting fewer dual transactions (an export container or empty trucked into the terminal and an import container hauled out) than they had been getting before the equipment dislocations surfaced, he said.