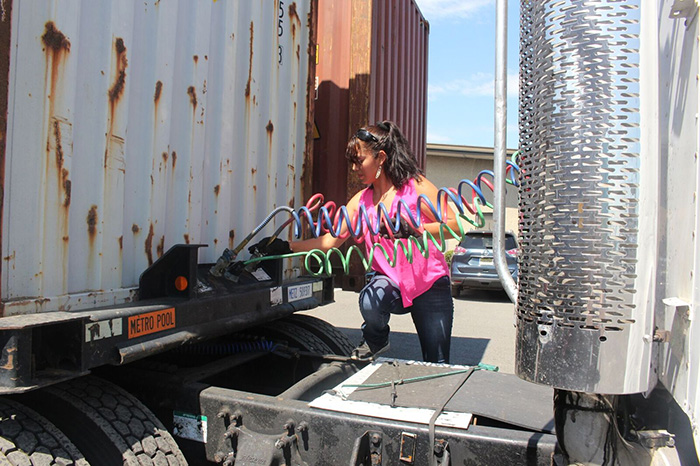 Martha Andrade, an owner-operator in the Port of New York and New Jersey for BBT Logistics Inc., in Newark, inserts power cables as she hooks her truck up to a trailer.

NEWARK, New Jersey — The opening of the first bathroom solely for female truck drivers in one of the busiest terminals at the Port of New York and New Jersey this month has highlighted the growing numbers of women drivers in drayage, which could prove vital to ameliorating the driver shortages plaguing the industry.

Although growing in number, women are still a tiny portion of those behind the wheels of the 9,300 trucks registered to go in and out of the Port of New York and New Jersey. Yet industry leaders say women drivers could provide one solution to the shortage of drivers, which is expected to worsen in coming years as baby boomer drivers retire, the volume of containers handled by the port keeps growing and the arrival of ever larger ships challenges terminals to process containers as quickly as possible.

The bathroom at Port Newark Container Terminal immediately caught drivers’ attention. The Port Driver, a Facebook page for drayage drivers, reported the news with the headline “Changes that are good for our port driver community,” adding that it was the first bathroom in any of the port’s four main terminals specifically for female drivers.

Up to then, male and female drivers, who sometimes have to wait hours at the terminal, shared a plastic portable toilet cubicle at PNCT, as is the case in most of the port’s terminals, drivers said.

The new building has a bathroom each for men and women.

“The sanitary services, the new bathroom — it’s a big deal,” said Pilar Rocha, 50, a single mother of three children, who has been driving in the port for five years. She described the situation before the opening as “a little uncomfortable.”

The bathroom, which PNCT said was created as part of its ongoing upgrade of the terminal, is the kind of adjustment that industry leaders say is needed if more women are going to get behind a truck wheel.

“We are seeing more and more female drivers,” Gregory Scott, vice president of operations at BBT Logistics. Inc. in Newark, where two out of the company’s 90 owner operators are women. “I wish we had more. We are finding that they are more responsible (and) dependable. They have a better on-time track record. They are all around good workers.”

However, the number of female truck drivers is growing slowly, even as numerous drayage companies across the Port of New York and New Jersey — as in ports elsewhere — display “drivers wanted signs” outside their yards on a permanent basis. The American Trucking Associations last year said the trucking industry as a whole is short about 48,000 drivers, adding that the figure could quadruple in the next decade, and has warned shippers that tightening capacity could bring higher rates.

At minimum, a shortage of drayage drivers would make it difficult, and slower, for shippers to get goods in and out of the ports, an issue that is expected to come to the fore at the end of 2017, when a project to raise the height of Bayonne Bridge will allow mega-ships of 14,000 twenty-foot-equivalent units to reach all the terminals of the Port of New York and New Jersey.

Figures for drayage drivers alone are not available, but the U.S. Department of Labor said women accounted for about 5 percent of all truck drivers in 2015, or 177,000 female drivers. That figure had grown by 21 percent since 2012, or an additional 31,000 drivers, compared to growth of 13.5 percent in the number of all drivers.

Weston LaBar, executive director of the Harbor Trucking Association, said women are still a small portion of the drayage driving community in his jurisdiction of Los Angeles, Oakland and Long Beach. Although with drayage companies constantly looking for new drivers, LaBar said he hears from his members that “some of the best drivers they are getting in new hires are women.”

Such hires are “going to become a more and more regular thing, specifically if we can provide accommodations to make them feel comfortable,” he said. “The more we can do to get more diverse folks, younger talent, into the industry, the better it serves everybody.”

Still, there are a number of barriers to getting more female drivers onto company rolls, Scott said.

“Historically it has been a man’s profession,” said Scott, noting that 12-hour days for drivers are not unusual. “It’s not easy work. It’s very demanding. It’s time consuming, especially for women who have families and responsibilities.”

Ellen Voie, president and CEO of Women In Trucking Association, Inc., a non-profit organization dedicated to getting more women involved in the trucking industry, said there are a variety of reasons why an increase in female drivers could be good for the industry. They include the fact that women are easier to train because they are more eager to learn, and are less of a driving risk, she said. Accidents involving women truck drivers tend to occur at slower speeds, and result in less loss of life and damage to equipment, according to Women in Trucking.

Voie said a key obstacle to getting women behind the wheel is the industry’s “image” problem.

“I believe that women don’t even consider a career in the trucking industry,” said Voie. “They look at the trucks and they think you need some kind of physical strength, and that the job is dirty and that it’s very physically demanding. And that’s an outdated misconception. They don’t realize how much technology and labor saving technology is in the truck.”

Added to that is what several women truck drivers interviewed by JOC.com said is the antipathy they face from some male drivers, including disrespectful comments that stem from a macho attitude — known as a “machista” attitude among Hispanics, who make up a large portion of the drayage driving population.

“People say, why do you have to do this work?,” said Pilar Rocha, an owner-operator who has driven in and out of the port for five years, having taken up the profession as a way to generate better income to help support her children. “(They say) this work is for men. You should be in the house doing the washing, while your husband works.”

“I don’t answer,” said Rocha, a single mother. “I just ignore it. They don’t know my story.”

Those kinds of issues didn’t deter owner-operator Martha Andrade, 35, who started driving a truck in 2007, and has driven in the port of New York and New Jersey for four years.

She said she entered the industry because she always liked to drive, and believed she could earn a good income doing what she enjoyed. Her brother-in-law taught her to drive a truck in Chicago, and she moved to New Jersey four years ago, when she got married. Her husband also works as a port driver. She mostly starts at 5 a.m., and frequently ends 12 hours later, in a good week earning about $1,200 after the costs of fuel and other weekly business expenses, said Andrade, who says she has paid off her truck already.

“In the beginning, I used to feel really bad, because I was the only one,” she said, but added that “now I don’t feel like that” because there are more women drivers.

“I like it,” she said. “I don’t feel less than a man, because I can do what they do. And I have got a good record driving. I like this business.”

Andrade, who works at BBT Logistics. Inc., said there are physical demands to the job but they aren’t great, mostly related to hooking and unhooking the trailer. On a recent morning, she demonstrated it by donning a pair of gloves, backing her truck up and hooking it up to a trailer, inserting power cables and raising the trailer — without straining.

Sometimes, when the brakes lock down, she has to crawl under the trailer to unlock them by hand, she said. And sometimes, male drivers give assistance, such as one earlier in the day who helped open a container door that was stiff, she said. But others are much less friendly.

“A lot of men are machistas. One of the drivers told my husband, ‘Why do you let her work on the piers?’” she said. “My husband said: ‘Why? Because she’s a woman? She drives better than me.’”

Olga Huyhuas, 46, a mother of five, whose youngest child is 7 and who has been driving at the port of New York and New Jersey since 2007, also dismissed the suggestion that strength is an issue. Standing five-feet tall, and weighing 145 pounds, she said the physical demands of the job have never kept her back.

“It doesn’t stop you — if you have a desire to work, and want to move ahead,” she said, adding that the most difficult part of the job is the danger of driving on the highway, and in the port.

She started driving as a way to improve her income on the low wages she was making in factory and restaurant jobs, she said. She drove the truck when pregnant, and even the long hours haven’t deterred her, because her husband — who works in a driving school — can get home early to take care of the children, she said.

Still, she added, her example has not led to any of her female friends becoming drivers.

“Many of my friends say ‘yes,’ they are interested, but they don’t advance beyond the exam,” said Huyhuas, who works at BBT Logistics. Inc. “I don’t know why. Maybe they are scared that it’s a lot of work, (that) it’s very hard. But I don’t see it like that. It’s easy.”

How to Improve OTIF: 15 Tips for On Time and In Full Delivery
END_OF_DOCUMENT_TOKEN_TO_BE_REPLACED