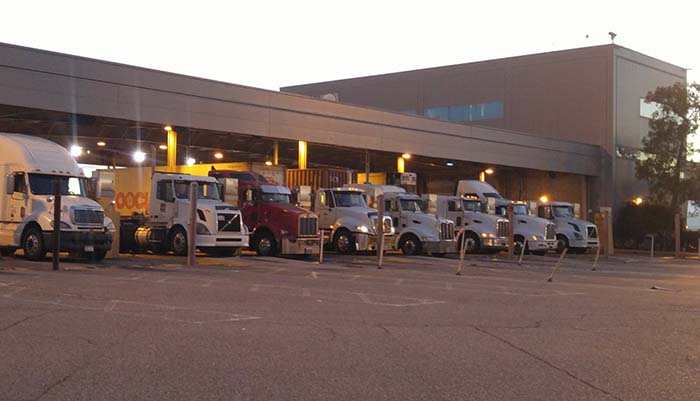 The average visit to the Long Beach Container Terminal, the gates of which are pictured, took 69 minutes in June. Credit: AJ Edmond

Truck lines in Los Angeles-Long Beach got slightly longer in June, much to the chagrin of truckers who completed fewer daily turns, and to some beneficial cargo owners who ended up paying truckers’ congestion surcharges at under-performing terminals.

“I’ll be the first to say there has been progress, but there definitely still is congestion. There are a lot of efficiencies that need to be in place,” said Weston LaBar, executive director of the Harbor Trucking Association.

The average truck visit time at all of the container terminals in the largest U.S. port complex was 83 minutes, or five minutes longer than in May, according to the June truck mobility data report by the HTA. What is more disturbing, though, is that the increased visit times appear to be due to a few continuously underperforming terminals that are pushing the average truck visit times up.

Overall, though, the largest U.S. port complex is making progress on reducing truck turn times. PierPass reported that in the second quarter of 2016 average truck turn times were shorter than during any other quarter since mid-2014.

Consistently excessive visit times of 100 minutes or longer can trigger one of two responses from trucking companies. In order to retain drivers, some companies pay waiting time to their drivers who might otherwise become frustrated and leave the industry. Other companies, though, will levy a congestion surcharge on their customers whose shipments move through consistently congested terminals. During the depths of port congestion in early 2015 when the coastwide longshore contract negotiations were dragging on, the surcharges were as high as $200. When overall conditions in the harbor improved later in the year, the surcharges diminished to about $50.

The HTA each month publishes truck visit times, which include line time outside the gate as well as in-terminal servicing time, as part of its truck mobility data effort. Marine terminals and truckers meet frequently to discuss the data and propose operational changes that could reduce truck visit times.

PierPass, which represents the marine terminals, reported a slight uptick in the average time trucks spent inside the terminals, measured from the time the trucks pass through the in-gate until they exit the out-gate. The average in-terminal visit times in June were 39.6 minutes on the day shift, up from 39.2 minutes in May, and 42.7 minutes on the night shift, up from 41.1 minutes in May.

The HTA and PierPass measure truck visit times differently, which is a continuing source of tension between the two groups. Terminal operators, through PierPass, say they have no control over those truckers who line up at terminals at 4 p.m. and wait for the night shift to start at 6 p.m. so their BCO customers don’t have to pay the PierPass traffic mitigation fee. Therefore, PierPass measures only in-terminal truck times.

Of the 14 facilities, nine had shorter visit times — some substantially shorter — than the 83-minute average for the harbor. For example, the Matson-SSA terminal maintained its consistently superior total visit time of 35 minutes. The terminal handles smaller ships than the larger terminals and drays inbound containers from the terminal to an off-dock yard. The newly-automated Middle Harbor, which separates vessel traffic from street truck traffic, thus eliminating an operational problem that manual terminals encounter, had an average visit time of 62 minutes.

The five terminals that exceeded the average had visit times ranging from 90 to 105 minutes, which skewed the portwide average. Each of those terminals has its own issues such as on-going construction, an especially large container yard that trucks must navigate, a spike in container volume due to container line alliance decisions on vessel deployment or gate and yard processes that need improvements.

LaBar said the performance at some terminals is consistently poor, so it is not unusual for HTA member carriers to charge BCOs a congestion surcharge, or they will refuse to call at those terminals.

Improved turn times can be attributed to large investments the past two years in terminal automation and port-related infrastructure development, new operating procedures spawned by the increasing size of vessels calling in Los Angeles-Long Beach, formation of a neutral chassis pool to eliminate intra-port repositioning of empty chassis and implementation of trucker appointment systems at some terminals, said PierPass President John Cushing.

The HTA in recent months has been holding forums at individual terminals at which the truckers share experiences unique to each facility and suggested improved processes tailored to each terminal’s operation and layout.

Likewise, the two ports hold regular meetings with all stakeholders, including terminal operators, labor, truckers and BCOs, to analyze portwide issues on many fronts that contribute to congestion and to propose measures to improve turn times. “We are encouraged by the recent turn-time results and appreciate the work that has been done to attain these results,” said Gene Seroka, executive director of the Port of Los Angeles.

Terminal operators at other U.S. ports that are also experiencing congestion owing to mega-ships and shifting carrier alliances could learn from the 11 years of experience that Los Angeles-Long Beach has had with PierPass, said Federal Maritime Commission Chairman Mario Cordero. In fact, Cordero said in an interview this week the commission is looking closely at congestion issues at all U.S. ports. “Congestion is an FMC issue at all ports,” he said.

Truckers and terminal operators are gearing up for the increased cargo volumes that will soon be crossing the docks during the late summer-fall peak-shipping season. This will be a test of the procedural modifications they made earlier this year, when volumes were lighter. East and Gulf Coast ports that are now receiving mega-ships with capacities of up to 10,000 twenty-foot-equivalent units since the expanded Panama Canal opened on June 26 must pay careful attention to the unprecedented cargo surges they will experience during each vessel call.

Los Angeles and Long Beach are considered industry leaders in the gathering of port data that is used in establishing metrics for port performance. In fact, freight forwarders and customs brokers this week encouraged all U.S. ports that struggle with congestion to step up their data-collection efforts and to consider the use of technology to address congestion problems caused by mega-ships and carrier alliances.

Capacity cuts at large US truckload providers deepen in Q2