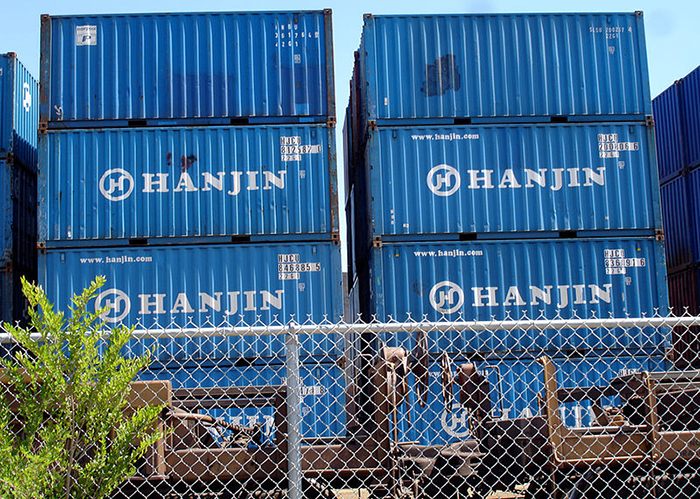 The bankruptcy of Hanjin Shipping is challenging every link in the supply chain.

As bankrupt Hanjin Shipping prepares to spend $90.7 million to “rescue” loaded containers on stranded ships, a US intermodal executive is worried about stranded empty containers shoreside.

Massachusetts-based RoadOne is a nationwide drayage operator serving ports, rail yards, and inland distribution centers from 40 US locations and with more than 1,200 intermodal tractors. The Hanjin bankruptcy has made hauling imports inland more complex and costly, Kellaway said.

“There’s a tremendous amount of extra handling” involved in drayage moves, he said, referring to the need to find places to deposit empty Hanjin containers before returning chassis. “Now you’ve got all kinds of additional moves, and somebody has to absorb the cost of that.”

Yes, but who? Shippers, terminal operators, and logistics and trucking companies are already filing lawsuits against the container line seeking unpaid debts. It could be years before some of those companies see a dime for their unpaid work. Many are likely to turn to the cargo owner.

Another major question is what to do with the empty containers once they’re unloaded. “You’ve got to get them grounded somewhere, whether it’s an off-dock depot or someplace else,” Kellaway said. “We haven’t been given any instructions from the Hanjin operating team.”

Finding a place to store empties isn’t easy. Not many terminals or businesses want them stranded on their grounds without knowing who will pay storage fees. There’s also the prospect that empty boxes could be seized by Hanjin creditors looking to recover money.

Finding locations to drop off empty containers “is adding legs” to the drayage move, Kellaway said, “and that adds inefficiency,” which in turn pumps up costs. “It’s a difficult situation in the drayage community because not everyone has the ability to get these things grounded.

“The terminals aren’t taking the empties back right now, and that’s a challenge,” he said.

Kellaway provided a tactical view into a strategic problem — an emerging imbalance in containers caused by Hanjin’s collapse. “You have a ton of containers either on the water or stuck at ports and inland container yards, and that’s going to create a massive lack of containers in Asia,” said Sri Laxmana, director of global ocean services at C.H. Robinson Worldwide.

“You’ve got a problem on the front end and the back end,” Laxmana told JOC.com Sept. 1. “Even if we have access to the containers and solutions to move them inland, the empties remain a question mark.” That’s likely to be true for anyone searching for them.

“I don’t know how they’re going to get their assets back,” Kellaway said of Hanjin. “They’ll be distributed throughout the country.” Locating the empties and retrieving them will take additional time and additional money, and where that money will come from is unclear.

Rising chassis costs are another concern for drayage operators. Some chassis owners have agreed to “stop the clock” on charges as truckers search for locations that will take the empties, “but not in every market,” Kellaway said. “It’s more the exception than the rule.”

Drayage operators are also being slapped with fees by terminal operators and chassis lessors that can’t collect from Hanjin. Flexi-Van and the largest US chassis provider, TRAC Intermodal, moved to limit their risk by announcing that effective Sept. 1 motor carriers will be billed for costs of any of the leasing companies’ chassis that are used to haul Hanjin containers.

Larger operators such as RoadOne most likely will be able to pass that cost back to their customers, the importers. Smaller drayage companies may have trouble doing so.

RoadOne had limited direct exposure to Hanjin, Kellaway said, but the drayage providers does bill Hanjin and other shipping lines directly in cases where the trucker is named as the “preferred carrier” of the importer. “When large importers buy their ocean product on a door basis, the ocean line pays the drayage line to move the goods to a distribution center. We have to bill the steamship line for that service,” Kellaway said. “We’re put in a difficult situation.”