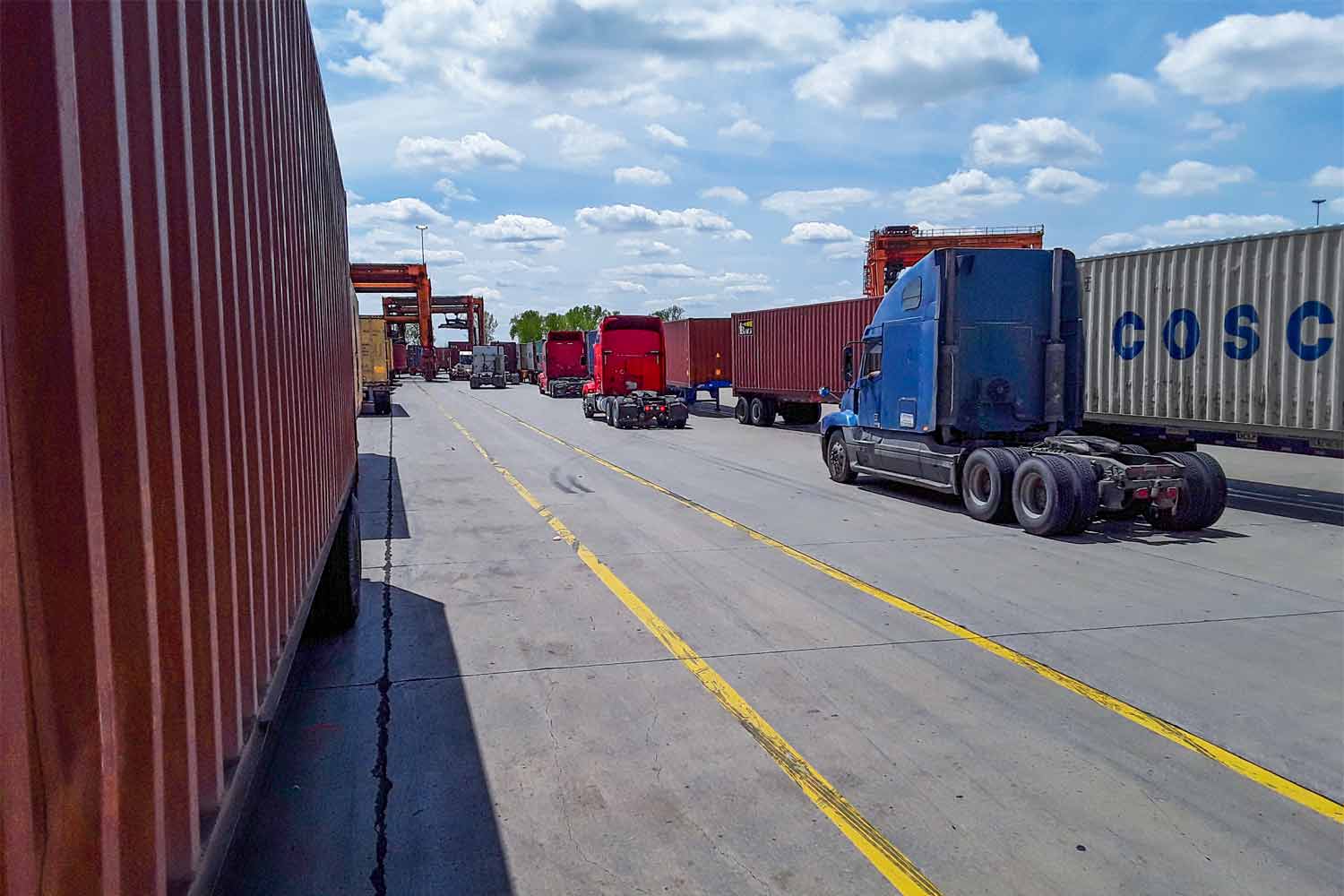 Drivers who dray ocean containers in the Midwest and South Central US are quitting in alarming numbers this year because rail terminal congestion has lowered their daily productivity and, in turn, their paychecks, according to trucking executives.

Although trucking companies have raised rates for drayage service and increased driver pay, it has not been enough to compensate drivers for completing fewer jobs per day. Drayage providers in Chicago, Cleveland, Columbus, Dallas, Kansas City, and Memphis have seen as much as one-quarter of their drivers quit because of their decline in income.

Average local drayage driver pay has fallen about 20 percent this year compared with 2019 because drivers get paid per completed job — not per hour or per mile — according to trucking executives in Chicago, Dallas, Kansas City, and Memphis.

With chassis shortages, terminal congestion, and restrictions on export loads and returning empty boxes, drivers have lost as many as three turns per day compared with 2019 and early 2020, the executives told JOC.com.

“I dread coming into the office some mornings because there is so much freight, and not enough equipment,” said Tina Cozzi, CEO of Land Transportation, a drayage provider in Chicago and an agent of The Evans Network of Companies. “We are struggling to keep the drivers we have happy.” On the least productive days, pay is down as much as 50 percent for Land Transportation drivers compared with two years ago, she said.

“It is very challenging working in intermodal, especially right now. If drivers can pull a van or a flatbed, it’s a little bit less stress on them, and they’re also bringing in more money,” Elam told JOC.com.

Dry van rates rose more than 50 percent year over year in March and were 75 percent higher compared with the dip in truckload rates April 2020 — the early days of the COVID-19 pandemic — according to a JOC.com analysis of data from DAT Solutions, LaneMaster, digital freight broker Loadsmart, and a survey of truckload brokers. Flatbed spot rates are up more than 65 percent compared with a year ago, according to DAT.

Losing drivers to the truckload market, or other industries, is exacerbating an overtaxed international supply chain. International intermodal volume rose 17 percent year over year in the first four months of 2021, according to the Intermodal Association of North America (IANA). IANA reports volume jumped 18 percent in the Midwest and surged 26 percent in the South Central US during this same period.

“We are having to do more work with fewer drivers,” said Mike Burton, CEO of C&K Trucking, a drayage provider in several US inland markets, including Chicago. “I need at least a 30 percent increase in our driver workforce to effectively handle the volume we’re seeing today, instead we have lost 20 percent. There are other opportunities available right now for drivers that are less complex and less frustrating where they can make more money.”

With fewer drivers, trucking companies are struggling to get all the import boxes out of rail yards before the free time expires, and shippers may not be able to get deliveries or pickups as quickly as two years ago, fleet executives told JOC.com.

Burton said a local Chicago driver in 2019 could complete as many as six jobs in a productive day, but today the average is three jobs. Other drayage providers gave slightly different figures, depending on the city and mix of business, but trucking executives agreed the average local driver completes one to three fewer jobs per day compared with 2019 and early 2020.

The executives also agreed that a shortage of available chassis is the primary culprit in the falloff in driver productivity.

Railroads have “grounded” import boxes until more chassis become available, leaving less terminal space for outbound containers. As a result, railroads cap the number of export loads and empty container returns at those facilities, causing boxes — and the chassis on which they are mounted — to sit in a trucker’s drop lot, further exacerbating the equipment shortage.

Ryan Houfek, chief commercial officer of DCLI, explained that the average number of days a chassis is out on the street has risen in every inland location, which combined with the volume surge has produced a paralyzing combination.

“The freight surge we are seeing in some markets is up 30 percent and 130 percent or more in other markets,” Houfek said during the Coalition of New England Companies for Trade conference May 12. “It’s a combination of events that we've never seen before. And there's simply no provider of capacity in the supply chain that can adapt to that dynamic.

“In certain markets like Kansas City, the Ohio Valley, and Chicago, we've seen wild swings in volume, demand, and dwell,” he added. “And not surprisingly, that's where you're seeing the shortages occur.”

In Chicago, Burton said drivers can spend at least two hours to get the right chassis.

Flip lines are too long

Truckers use a flip line, also known as a lift line, inside a rail terminal when a container needs to be loaded or unloaded from a chassis. There are several reasons why a trucker may use a flip line.

If there are no available chassis available inside the terminal, then a driver would go to a flip line with a chassis procured in another rail yard to get their container mounted. In some cases, it will be a trucker-owned chassis, and in other cases, as Burton explained, it’s a chassis the driver went across the city to secure.

Flip lines are also commonly used when a driver wants to do a dual transaction — dropping off one box and picking up another same move — or the trucking company owns the chassis underneath an export or empty container.

Flip lines have grown longer in recent months because of the chassis shortages, including two-hour delays inside BNSF Logistics Park Chicago (LPC) on May 14, according to multiple sources, eating into a driver’s regulated hours behind the wheel.

“They both got into LPC around 9:30 in the morning. They had to wait for lift off because it was our chassis. They were there until nearly 4:00 in the afternoon waiting to get the empty box lifted off. We charged our shipper for driver detention, but that doesn’t even come close to recouping the productivity loss for those two drivers,” Cozzi said.

One of the few bright spots has been in Dallas, according to Elam, where driver productivity has improved in the last 30 days compared with the chaos of mid-February. He said driver paychecks have gone back up too, but drivers remain skeptical about whether this is only a temporary reprieve.

That chaos remains the norm in Chicago, Cleveland, Columbus, Memphis, and Kansas City, according to Elam, Burton, Cozzi, and other fleet executives, with no clear indications as to when calm will be restored.

Navigating the Winding Roads This Peak Season & Beyond
END_OF_DOCUMENT_TOKEN_TO_BE_REPLACED