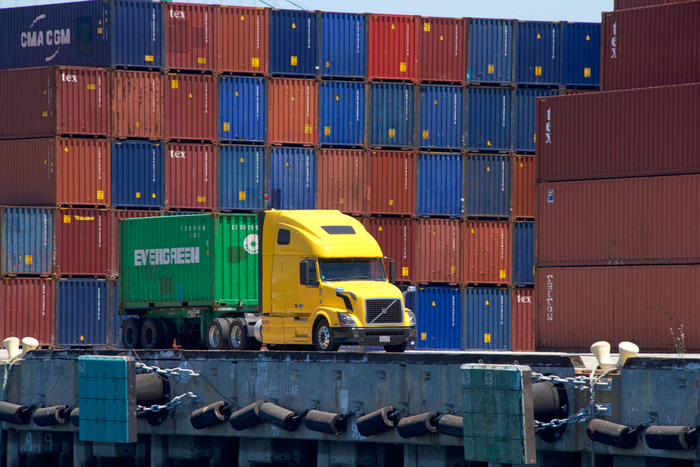 Drayage providers — both asset-based and not — are keenly aware of the need to drive more digital options for shippers, but brokers also are wary of sacrificing hard-fought relationships in favor of marketplaces. Photo credit: Shutterstock.com.

The drayage industry is inching toward a scenario where more transactions will be digital, but it remains beset by disconnected data between key parties and equipment availability issues on the export side.

“There are a few companies, in and out of the broker space, that are trying to add technology to ease congestion at the ports, smooth out chassis and box exchanges, and limit empty miles,” Michael Kroul, CEO of the nationwide drayage broker KTI, told JOC.com in a briefing this week.

Kroul, who led a panel on digital freight matching at the eyefortransport Third-party Logistics (3PL) & Supply Chain Summit in Atlanta last week, elaborated on how far drayage providers — both asset and non-asset — are from providing a digital experience akin to that which has emerged in the US truckload industry. Some barriers remain, he said, including the “huge amount of fragmentation in the asset space, the ability and willingness for shipping lines to share equipment and information with each other, and the differences on how freight forwarders, shipping lines, trucks, and other providers all have their own way of distributing information.”

Kroul said drayage is still plagued by its “black hole of last mile” identity, and said for most providers, visibility ends at the port or rail yard.

“That has to change,” he said. “Increased visibility at the port, rail, and depot levels is needed.  It is common for a shipping line to see an abundance of inventory in their system, but at the ground level, they may be out of stock or critically low on equipment.

“The current systems being utilized by the lines and equipment pool points are not keeping pace with the velocity of the industry,” Kroul added. “Technology at the ground and desk level does not seem to have kept pace with the continued expansion of the ports and rail ramps.”

On the brighter side, he said many ports and rail ramps are paperless or have plans to roll out such initiatives, but the majority of inland depots are still dependent on printed, or in some cases, handwritten equipment interchange receipts or J1s, which are reports that detail any damage, container information, shipping information, the dray driver involved, and time of in-gate and out-gate.

As for whether shippers will ever migrate to a marketplace for drayage, Kroul said the efficacy of such an approach is dependent on the provider of that marketplace and nature of the move.

“I can’t speak to the asset side, but in some ways, KTI is already providing our customers with a marketplace for capacity,” he said. “We do a lot of export, and due to the short timelines involved, our customers look to us to provide equipment, drivers, and options [outside of that marketplace].

“I am aware of companies trying to do that right now at certain ports,” he added. “For the perfect import, on schedule, with equipment, and working with the shipping lines for access to the import boxes, a marketplace will work. It gets a little more complicated on the export side.”

The lesson Kroul has taken from success in digital freight matching in long-haul trucking is that “density builds capacity and capacity builds customers. There are only six or seven $100 million drayage asset providers, with over 90 percent of drivers being a single or small independent carrier. If you can get them to stay in your ecosystem, you can compete against those larger carriers who dominate the large import accounts.”

Kroul added that “if you become too dependent on external digital freight matching sites, you will lose focus on your partnerships and where you provide value to your customers. They are a valuable tool, but just one of the many tools we use at KTI.”

While there have been some technology advances in drayage — some backed by industry insiders and others by venture capital — “drayage is a dirty business to many,” Kroul said.

“Most trucking companies and brokers will not touch it. Short hauls, too little profit per load, and not expandable,” he said. “Technology will not take all the dirt out, but it has been proven, even by companies that have failed, that a more efficient process of ship to port to receiver can take empty miles and maximize profits for the drayage providers. Technology is already helping to reduce driver waits at ingate and container dwell at the shipper.”

A truckload path that drayage is unlikely to follow is the national model, due to regional advantages that have been built up, Kroul said. “We have a hard time seeing a national platform for all-dray trucking, but specific regional apps and platforms exist now and will only get better.”

That doesn’t mean drayage won’t be a target for consolidation, particularly given it is fragmented within each region.

“With so many investable dollars in our space right now, everyone is looking to gain more market share,” Kroul said. “Niche supply chain operators, like drayage, are a prime opportunity to consolidate.  It is a $40 billion niche business. Most of the players I talk with are acquisitive and looking.”