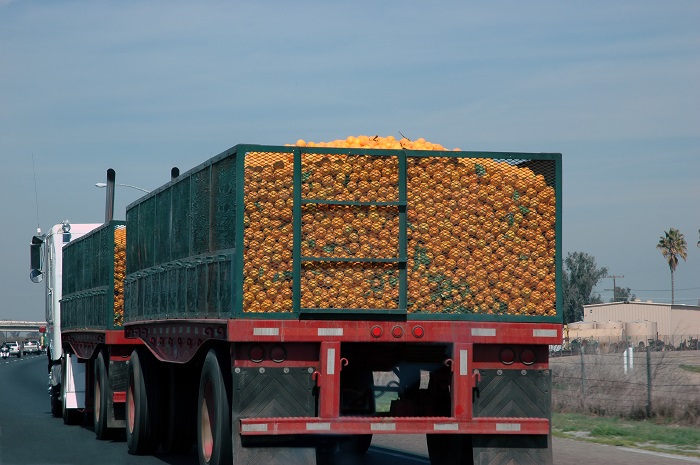 US truck prices to transport fruits and vegetables from Mexico and California are up 20 to 30 percent compared with a year ago, mirroring the rates in other modes too. Even so, the purchasers of transportation are opening their wallets and riding out the inflation until the macroeconomic environment changes. (Above: A truck transports oranges in California, United States.) Photo credit: Shutterstock.com.

US wholesalers and shippers stocking shelves with produce are grappling with steep truck rates up as high as 30 percent from last year — as prices out of California and Mexico surge with the produce season kicking into high gear after Memorial Day.

Refrigerated truck rates have followed the same industrywide trend: spot market prices are up about 20 percent to 30 percent on a year-over-year basis. Load-to-truck ratios are elevated because there aren’t enough trucks capable of handling the demand, which gives the truckers leverage to prioritize shippers paying a higher rate. The refrigerated ratio was 14.7 for the week ending June, according to load board operator DAT Solutions, although the week included the annual Commercial Vehicle Safety Alliance Roadcheck for which many drivers schedule time off. The electronic logging device (ELD) mandate has also lowered productivity and increased transit times while the Cass Freight Index shows shipments rose 12 percent last month. In other words, more trucks are necessary to transport the same volume even before handling new freight.

There was an agricultural exemption to ELDs, but refrigerated carriers installed the devices nonetheless because they also haul non-exempt commodities. The US Federal Motor Carrier Safety Administration announced May 31 that truckers hauling agricultural products wouldn’t have to begin their hours-of-service clock within a 150-air-mile radius of the loading site and the clock would only start the minute they crossed the limit.

Nevertheless, the market conditions for the produce industry are the same. Truck rates out of Mexico through the Nogales, Arizona, crossing are up 24 percent on a year-over-year basis when combining all destinations tracked by the US Department of Agriculture (USDA) data. From Imperial and Coachella, California, prices are up 25 percent; from Oxnard, California, up 22 percent; from Salinas, California, up 18 percent; and from Santa Maria, California, up 33 percent. The USDA data cover the week through June 13.

The federal data are consistent with the weekly numbers from load board operator DAT Solutions. The national refrigerated spot rates soared 28 percent on a year-over-year basis for the week ending June 9, and were up 23 percent when the rising diesel prices were excluded. In the last few weeks, spot market rates were up more than 25 percent from Stockton, California, to Portland, Oregon, and Denver. For the last month, rates through Nogales jumped 29 percent, and outbound from Fresno, California, grew 27 percent.

It’s puzzling because produce volumes have been relatively unchanged from last year. Truck shipments fell slightly twice in the last three weeks and were only marginally higher in the latest reading. If volume leads pricing, then something is amiss.

“What we see as a spot market load is down, but overall activity seems to be up. There has been a shift on the longer hauls to intermodal in some cases. Some of the freight has gone to dedicated contract carriage and some has gone to power only,” said Mark Montague, DAT industry analyst. Power only represents shipments in which the trucker only supplies a tractor and is hooked onto the trailer at the loading site.

Ken Lund, vice president of third-party logistics provider Allen Lund Co., said that volumes are up 3 percent this month versus June 2017. He said the numbers were depressed until recently due to the late spring, but shipments are on the upswing.

“We had storm after storm in the east, so people didn’t go out and buy produce and that tamped down a lot of demand. You had this pent up demand that really came out in May and now June,” Lund said.

Shortage of trucks has tipped the supply/demand scales

He also noted the shortage of trucks has tipped the scales of supply and demand. The USDA found there were slight or moderate truck shortages ever since Memorial Day at the major US-Mexico border crossings in Texas and Arizona and out of California.

“When produce season is a little slower in other parts of the US, trucks redeploy to California. Those are all long-haul routes out of California. When they go from Fresno to Boston, the trucks are out of circulation a lot longer than they would be if they were running out of the Southeast. So even though the volumes aren’t there, the miles are,” Montague said.

Who is the loser in all of this? Those buying the transportation.

Unlike other sectors, the receiver pays to transport fruits and vegetables from the farm. The receiver could be food brokers, wholesalers, cooperatives, or a combination of the three. It’s these middlemen that suffer margin erosion because cost-conscious retailers negotiate hard with them.

“No one cares that you paid $12,000 to move strawberries, it’s all about what our customers are willing to pay: supply and demand. But we can’t step away and say ‘we’re not going to load this particular item’ because that’s not how [A&J Produce] was able to grow over the last 40 years,” Pelosi said.

Inflation is a problem for purchasers of transportation, but one truckload executive told JOC.com that the business climate won’t flip until there is a macroeconomic disruption.