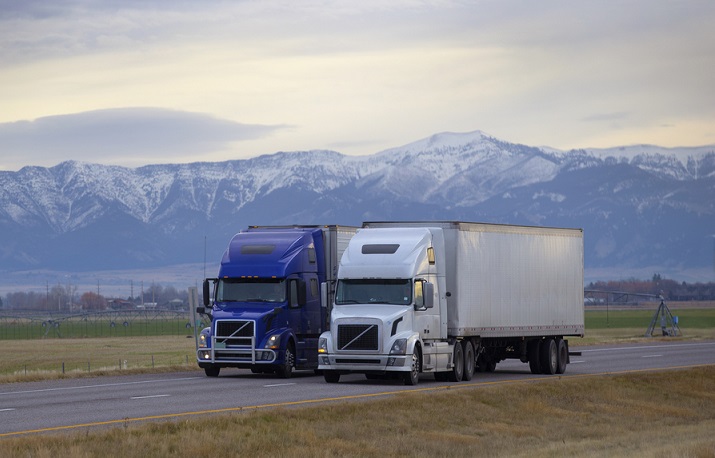 While US contract volumes are growing, spot markets are receding. DAT reports the national dry van load-to-truck ratio fell 15 percent in October on a year-over-year basis, a sign that less freight is being posted and more trucks are available. (Above: Trucks travel in Montana, United States.) Photo credit: Shutterstock.com.

A new survey from Citi Research confirms the sticker shock of US truck rates is over and shippers may have more leverage in 2019 contract negotiations than previously thought.

Capacity is balancing out and it’s not nearly as difficult to find a truck as in January or February, according to shippers in the survey. The budget busting spot markets, which reached unprecedented levels earlier this year, no longer cost a shipper more than a contractual truckload haul. Talk of a 5 percent to 8 percent increase in contract rates in 2019 is now giving way to chatter of 1 percent to 5 percent.

It’s a remarkable shift in a short period of time. In 2014 — the previous pro-trucker market — spot rates peaked in March, according to DAT Solutions and Truckstop.com. It took another 12 to 15 months, however, before a recession in rates, and shippers couldn't secure lower contract rates until 2016. This year, the spot market topped out in January-February but is stagnant only eight months later. Freight once placed on the spot market is now being tendered to contract carriers. Freight volume remains strong overall but mostly due to contract business. The American Trucking Associations Tonnage Index grew 9.5 percent in October and the Cass Freight Shipment Index was up 6.1 percent. If volume is a leading indicator on pricing, it would be premature to consider the pro-trucker market over.

While contract volumes are growing, spot market demand is receding. DAT reports the national dry van load-to-truck ratio fell 15 percent in October on a year-over-year basis, a sign that fewer loads are being posted while more trucks are being listed as available.

“Overall, we view these results as supportive of our recent move to get more cautious on 2019 freight growth. We believe there is a deceleration of freight growth occurring now and into 2019, due to tariffs and trade concerns, [and] a current softening in demand,” said Christian Wetherbee, Citi Research analyst. “Our respondents are reflecting this reality in the softening tone of our survey.”

Wetherbee told JOC.com that trucking companies once forecasting upper single-digit contract rate increases in 2019 are starting to rein back expectations towards low-to-mid-single digits.

One reason is the vanishing spot market upcharge, or the spread between one-off and contract rates. Earlier this year, a JOC.com analysis showed shippers were paying an additional 25 to 50 cents per mile. The number has now fallen to between a penny and a nickel. On a 1,000 mile dry-van haul, for example, shippers would have paid $250 to $500 extra on a spot transaction earlier this year, whereas now the invoice on a spot move is nearly identical to contract pricing.

Savvy shippers will bring up this lack of a spot market "penalty" during contract negotiations in 2019.

Some have already adjusted their thinking to a possible swing in the market. In March, only 14 percent of shippers believed rates would be unchanged in the next three months. Today, the number has ballooned to 44 percent. Half of those who believe contract rates will go up in 2019 believe it will be 5 percent or less.

“I expect trucking rates to remain stable over the next three months. While fuel cost is still a factor, there are more drivers available now, at least in our region,” a Montana shipper told Wetherbee.

“I do not expect trucking rates to increase further over the next three months. While there is still a shortage of drivers, fuel prices have gone down in our area,” said another shipper based in Alabama.

“Some rate increases granted in the past year will be revisited to ensure rates are fair and reasonable,” one shipper said in the survey, released Nov. 21.

“[I] continue to hear from carriers that 2019 rates will be trending higher. [I am] beginning to see brokers and spot coming in lower and challenging that notion, and starting to hear more asset carriers say they have some capacity. Holidays will tighten up a bit, but I believe the first quarter will be more telling of where the market is headed,” another said.

If early 2019 is a litmus test, then trucking companies have good reason to worry. The previous winter was one of the busiest in recent memory, which prompted some carriers to assess surcharges such as repositioning fees. This upcoming winter, however, a new round of higher tariffs will loom over the industry. Marine ports and intermodal providers are bracing for cargo owners to move up container shipments into December, which would harm January and February volumes.

If this does occur, the question becomes whether the effects are isolated to drayage or spread to truckload and less-than-truckload? It’s an uncertainty that could make 2019 a transition year in the pendulum between shippers and truckers.